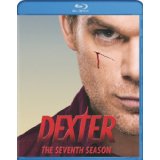 “I found this website… “How to Cure a Serial Killer in Ten Easy Steps” and this is the 1st step.”

Dexter left us with quite a shock at the end of the 6th season. Shows have left us with cliffhangers before, but this was one of the most exciting season finales I’ve seen in a long time. Sister Deb walks in just as Dexter does his plastic playtime act, and there’s no way to wiggle out of this one. As fans of the show, we knew that things just weren’t going to be the same…and we were right.

Dexter Morgan (Hall) is a forensic lab rat for the Miami-Dade Police. He really knows blood splatter. He should, because he moonlights as a killer. It seems that poor old Dex just can’t help himself. His parents were criminals, and he witnessed his mother’s brutal slashing by a chainsaw gang when he was just a young boy. He was adopted by Harry Morgan (Remar), a police officer. Harry saw the killer instinct in Dexter and taught him how to channel the urges for the sake of good. Dexter adopted Harry’s Code, which means he only kills others that he’s able to prove were killers themselves. His father continues to guide him through his own mind, meaning we get to see Pop even though he’s gone. Working for the police with his lieutenant sister, Debra (Carpenter), Dexter is constantly just on the verge of getting caught. He has to adapt and evolve to avoid capture. Meanwhile Debra has several bad relationships including an on-and-off deal with bad boy cop Quinn played by Desmond Harrington.

“Most actors toil in obscurity, never stepping into the spotlight. But if you hone your craft, work diligently, you might just find yourself cast in the role of a lifetime.”

Talk about your perfect roles. The first thing that makes Dexter work is its star Michael C. Hall. You might remember Hall from his days on Six Feet Under, where he played the conflicted and very gay funeral director. His deadpan style and somewhat offbeat timing make him a perfect fit for these rather quirky characters. If you thought he was good as David Fisher, you’re simply going to love him as Dexter. It amazes me how different he looks and sounds. It was at first very difficult for me to actually identify him, he gets so completely immersed in character. You’ll find yourself rooting that Dexter doesn’t get caught, if for no other reason than you don’t want the show to end. The other actors and characters are also quite good. They include David Zayas as Detective Angel Batista, C.S. Lee as the lecherous lab tech Vince Masuka, and Lauren Valez as the head of the unit, at least for the first five seasons before she moves up to captain.

“When some chemicals mix, they combust…and explode.“

Michael C. Hall has demonstrated time and again since his Six Feet Under days just how good of an actor he really is. That doesn’t mean that he can’t continue to surprise us with the depth that he constantly takes the character of Dexter Morgan. Seldom has a character been so vividly fleshed out. Still, it’s not only the performances of Hall and the other series regulars that contribute to the quality we’ve come to expect. Dexter has had his share of foes and playmates over the years, and each of these relationships has been a joy to watch. Guests have included the likes of Jimmy Smits, Colin Hanks, John Lithgow, Sean Patrick Flanery, Edward James Olmos, Julia Stiles, Jaime Murray and Julie Benz as his short-time girlfriend/wife. Many of these actors came to play along with Dexter in his need to kill. Most have been outstanding.

Usually Dexter gets a playmate who learns his secret and plays along for a while. Something always goes horribly wrong, and before you know it Dexter has to put an end to the relationship as only he can. This year Dexter did indeed get his new playmate in the form of Chuck’s own Yvonne Strahovski as Hannah. This time things happen a little differently. Dexter starts out wanting to kill her and ends up falling in love. Maybe Dex has finally found someone he can relate to. Strahovski gets to show another side that we never really saw on Chuck. She’ll be back in the final season, and I expect they’ll be some chemistry fireworks yet to come.

The guest star power doesn’t end with the Hannah character. Ray Stevenson from Rome and Thor joins the season’s cast as Isaak Sirko. Isaak is out for revenge on Dexter because of one of the pieces of trash Dex dumped into the Atlantic. Stevenson looks and acts quite different from any role you’ve seen him in before. He’s a European mob leader with a little style and sophistication who also has a rather important secret himself. This is Dexter’s best nemesis ever, and the moments between the actors/characters are all golden. I’d have watched the season just for those interactions.

Of course most of the season is focused on the change in Dexter and Deb’s relationship. At first Dexter tries to continue to cover up who he really is, but we all know that just isn’t going to work this time. It’s the best work from show star Jennifer Carpenter. I usually saw her as the potty-mouthed diversion to the real story. Now she gets into the meat of the thing, and by the end of the season she’ll find herself in a situation you likely won’t see coming. The season allows this interplay to develop and change throughout so that we never fall into a comfortable zone. Deb’s feelings are going to change several times before the season’s over, and it’s the first time that I ever really regarded the character as essential to the storytelling.

I can promise you a rewarding season even if there are not so many Dexter killing moments to be found here. It might not be as bloody, but it is just as compelling, perhaps even more so.

At the end of June the final episodes of Dexter are slated to begin airing on Showtime. I have mixed feelings about the whole thing. I’m certainly sad to see the show leave, and I’ll miss not having new episodes to look forward to. On the other hand I’m quite excited to discover where this is all going to lead. I suspect the ending won’t be an unexpected drop-out ala Sopranos. This one’s going down with a bloody splash. Anything else would be a major disappointment. “If we’re gonna do this, we’re gonna do this all the way …”

Gino Sassani is a member of the Southeastern Film Critic's Association (SEFCA). He is a film and television critic based in Tampa, Florida. He's also the Senior Editor here at Upcomingdiscs. Gino started reviewing films in the early 1990's as a segment of his local television show Focus. He's an award-winning recording artist for Omega Records. Gino is currently working on his 8th album Merchants & Mercenaries. Gino took over Upcomingdiscs Dec 1, 2008. He works out of a home theater he calls The Reel World. Favorite films: The Godfather, The Godfather Part II, The Body Snatcher (Val Lewton film with Karloff and Lugosi, not the pod people film), Unforgiven, Gladiator, The Lion King, Jaws, Son Of Frankenstein, The Good, The Bad And The Ugly, and Monsters, Inc.
Witness: A World In Conflict Through A Lens The Hangover Part III