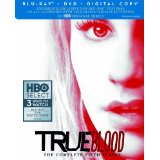 Well, it is that time of the year when we must see what the blood suckers, shape shifters, wolves and the faeries are up to. No, I am not talking about the State of the Union address; I’m talking about the latest season of True Blood. Season Five to be exact. In these twelve episodes, we again travel to the land of Bon Temps, Louisiana and see exactly what delicious trouble and dastardly deeds our characters can get themselves tied up in.

We join Bill Compton (played by Stephen Moyer) and Eric Northman (played by Alexander Skarsgard) cleaning up their little mess (actually Eric is doing the majority of the cleaning while Bill talks on the phone) after they gave Nan Flanagan the true death at the end of Season Four. However, once they leave the mansion, they are immediately captured by Authority security.

Meanwhile, Sookie Stackhouse (played by Anna Paquin) and Lafayette Reynolds (played by Nelsan Ellis) are grieving over their best friend/sister, Tara Thornton (played by Rutina Wesley) who took a bullet for Sookie. The two get the bright idea that they don’t want Tara to die and get Pam De Beaufort (played by Kristin Bauer van Straten), a vampire to turn the girl even though that would be the last thing Tara would ever want.

Pam decides to do it but only if Sookie owes her one in addition to mending the relationship between Pam and Eric. Pam slices her arm and lets the blood drip into Tara’s mouth thus beginning the ritual to turn her into a vampire. There is no guarantee that this will work since Tara is missing half her head. Pam and Tara are soon buried together and sunset will come very soon.

Moving on to the other Stackhouse kin, Jason (played by Ryan Kwanten) opens his door to see new vampire, Steve Newlin (played by Michael McMillian), former preacher of the Fellowship of the Sun. Steve uses his vampire mind tricks to get Jason to invite him in where Steve suddenly reveals his true feelings to Jason. Jason does not swing that way, and proceeds to tell Steve that it was a nice speech but it’s not going to work.

That does not get the type of reaction that Steve was hoping and puts Jason in a bad situation. Thankfully, Jessica Hamby (played by Deborah Ann Woll) who is in a friends w/benefits relationship with Jason is in the neighborhood and is able to help Jason rescind his invitation to Steve and kick him out of the house. Jessica decides to stay and reveals her ridiculously hot Red Riding Hood lingerie outfit to Jason and you can guess what happens from there. I am guessing Jason plays the part of the big bad wolf, though maybe Jessica plays both parts if you get my drift.

Speaking of wolves, when we left Season Four, Alcide Herveaux (played by Joe Manganiello) had killed packmaster, Marcus. However, the pack goes to Sam Merlotte first (played by Sam Trammell) who confesses to the crime instead despite the protests of his girlfriend Luna Garza (played by Janina Gavankar). This could lead to Sam’s own demise if he is not careful.

We finally rejoin Bill and Eric’s car ride to the Authority headquarters where they are tied up in the back of the van. Bill and Eric are able to create an explosion inside the van which allows for them to escape. However, they look up to see Nora Gainesborough (played by Lucy Griffiths), Chancellor for the Authority. But that’s not her only link to this pairing. It turns out that she is also Eric’s sister and was planning an escape for them all along. Eric and Nora share a passionate kiss (your guess is as good as mine) as the three of them plan their next move.

The major plot of the fifth season centers around Bill and Eric’s time at Authority Headquarters where they meet the various chancellors such as Nora but also Salome Agrippa (played by Valentina Cervi) and Guardian, Roman Zimojic (played by Christopher Meloni). Their mission (or ultimatum) becomes to find Russell Edgington (played by Denis O’Hare) who had escaped after Bill and Eric had encased him in concrete.

Another central story to the fifth season is the evolution of Tara as a vampire who has a hard time (as one would expect) dealing with this new life and everything that comes with it. The relationship between Tara and Pam is very entertaining as it’s probably my favorite story of the fifth season. We also learn a ton about Pam who is quickly becoming one of my favorite characters the more I see her. There are also some good flashbacks between Pam and Eric which is worthy of mention.

There are plenty of good stories this time around (and a few eye rolling ones like Terry Bellefleur and the Ifrit or Andy and his one (err two) night stand with a Fairy) but they all eventually intertwine into the Authority where the climax takes place. I am not sure if I like where the story is leading into Season Six (especially with Bill Compton), but this season was full of intrigue and interesting plotlines. Also, special props go to Sam this season for the most inventive kill I have ever seen in this series.

The video is presented in 1.78:1 anamorphic widescreen at 1080P. Color is very well detailed here and we get a wonderful sense of small town life. As expected, we get a good dose of swamps and marshlands but despite the dingy intentions, it feels quite beautiful. The only less than perfect or soft areas occur when they are in tight shooting locations where detail is not as quite as high. Great marks all around for the most part and some solid video from HBO.

True Blood’s sixth season will actually only be ten episodes in order to accommodate the pregnancy of Anna Paquin and several economic factors. It is possible they might be winding down the series though I would think it still has some life in it especially after this exciting fifth season. We really learn about characters such as Pam and Tara and are introduced to others such as Nora in what is a very entertaining story line.

The 5 blu-rays and 2 dvds again have a strong showing with wonderful video and audio along with a solid set of extras to accommodate fans of all dedication. For fans, this is an easy recommendation and HBO always produces solid blu-ray sets for its top shows. The show is bloody, the show drips of sex, there is plenty of sarcasm and it is everything a viewer could ask for in a very adult drama. Let’s hope it continues for many years to come.

Disc Two
Whatever I Am, You Made Me
We’ll Meet Again
Let’s Boot and Rally

Disc Three
Hopeless
In the Beginning

Disc Four
Somebody That I Used to Know
Everybody Wants to Rule the World
Gone, Gone, Gone

Disc Five
Sunset
Save Yourself

Michael Durr has been reviewing movies for the better part of fifteen years now. He primarily enjoys thrillers, sci-fi, animation and even a little courtroom drama. His favorite films include Escape from New York, the Goonies and anything with Alyssa Milano. When he’s not praising Kurt Russell as the greatest actor of our time or scratching his head over a David Lynch flick, he’s spending time at home in Texas with his lovely wife, Lori and his amazing son. How they put up with him is a mystery, but even Basil Rathbone doesn’t have the time to solve that one.
Beautiful Creatures (Blu-ray) Witness: A World In Conflict Through A Lens