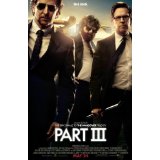 “Someone should burn this place to the ground.”

How do you satisfactorily finish a story? You bring it full circle. They say, “What happens in Vegas, stays in Vegas.” But for Phil (Bradley Cooper), Stu (Ed Helms), Alan (Zach Galifianakis) and Doug (Justin Bartha), what happened in Las Vegas four years ago will come back to haunt them. In this conclusion to The Hangover saga, the Wolfpack returns to where it all began to face their toughest challenge yet.

After a family tragedy and a freeway accident involving a giraffe, Alan’s loved ones stage an intervention for him. They convince Alan to go to a mental health facility in Arizona. On the way there, they are run off the road and taken to Marshall (John Goodman). Apparently, the infamous Mr. Chow (Ken Jeong) stole $21 million in gold from Marshall four years ago. Because of Alan’s relationship with Chow, Marshall feels the Wolfpack can find Chow and get his money back.

Marshall then kidnaps Doug and tells the guys they have three days to bring him Chow or he’ll kill Doug. In their search for Chow and the gold, the Wolfpack reunites with some old friends, encounters some very angry roosters and makes a memorable return to the rooftop of Caesar’s Palace.

Director/co-writer Todd Phillips knows what went wrong in the second film. With the exception of a few lines of dialogue at the beginning of this film, that movie isn’t referenced at all. (So for those of you who wisely skipped Part II, you won’t feel left out.) Instead, he throws the guys into new territory: full realization of what their actions have done. While Part III lacks the fun mystery of “What the hell did we do last night?” it allows the characters to evolve and change, instead of reacting the same way to every new twist and turn. With the exception of Doug (poor Justin Bartha doesn’t get enough screen time, yet again), the guys have actually matured since the last time we saw them. Phil is more serious, Stu has more confidence and Alan has gone from a man-child to a bratty man-teenager. These new attitudes put a new spin on the story.

While the entire cast is great, Galifianakis and Jeong steal every scene as Alan and Chow. While Alan’s new bratty attitude is abrasive at first, it quickly becomes the focal point for many one-liners and hilarious scenes. His reaction to the giraffe debacle is priceless, as are his scenes with pawn shop owner Cassie (Melissa McCarthy, Bridesmaids, Identity Thief). Jeong’s expanded role as gangster Leslie Chow is flat-out fantastic. From parachuting through the Vegas strip to singing Johnny Cash’s cover of “Hurt”, Jeong hits your funny bone every time. I now want to watch every episode of Community, just to watch him. The only drawback with these two doing so well is that Cooper and Helms are reduced to being the straight men. While this was already Cooper’s role, I felt that Helms was being held back in several scenes, especially the one where he’s trying to get prescription painkillers with his dentist’s license. I just felt he could’ve done more. This is probably the only complaint I have about the acting.

Another reason this movie works is its villain. John Goodman is both scary and funny, usually in the same scene, as rival mobster Marshall. Not only is Marshall a great antagonist, but he helps tie the films together by employing Black Doug (Mike Epps) and revealing how the group’s misadventures with Chow led to him staying in Vegas and stealing Marshall’s gold. It’s always great to see Goodman playing against his usual good-guy type, and really getting into the character of Marshall.

The score for this film — while not having a performance by Ed Helms (which I sorely missed) — is really good. Christophe Beck returns to make a soundtrack that completely enhances the comedy, whether it’s an instrumental piece or Alan/Chow singing. Comedies don’t usually have great soundtracks in my experience, so to have one in The Hangover Part III that compliments the film so well was a rare treat. I’m still disappointed about the lack of Helms’ singing, but it actually fits with his character development. So, I suppose I must soldier on.

One of the more frustrating things for me when watching sequels is the lack of continuity. In this regard, Part III holds up its end of the bargain. Not only is Black Doug back, but his actions in the first film set up the story for this one. Everybody’s favorite stripper/escort Jade (Heather Graham) is back as well. Heck, even baby “Carlos” makes his return, now a cute little toddler. There are also numerous sight gags that refer to the previous films, such as a tiger rug being draped over the back of a couch. It’s a lot of fun to try and catch them all. The only disappointing thing here was the lack of cameos. Melissa McCarthy is great as the elderly-abusing Cassie, but I feel there were a few missed opportunities for some really funny cameos, especially when the gang traveled to Mexico.

I went into this film sincerely hoping it would be better than the previous one, so I was very happy to see the guys return to Las Vegas. Part III is different enough from the original to keep it from being repetitive, yet still retains much of what made the The Hangover a smash hit. While it isn’t as good as the original, Part III comes darn close and is a fitting conclusion to the series.