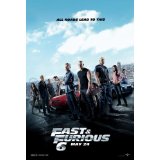 “Any of this feeling familiar to you?”

Remember how everybody was really excited to see some of their favorite superheroes — plus Hawkeye (I kid, I kid) — in the same movie last summer? Well, I feel compelled to point out a different group of muscle-bound misfits actually beat The Avengers to the finish line by more than a year. Fast Five, released in April 2011, featured characters from each of the previous four Fast & Furious entries and, not coincidentally, easily became the biggest hit in the action franchise. So getting the gang back together for another round of motor-based mayhem was — much like these movies — a no-brainer.

Fast & Furious 6 follows the current bigger-is-better, globe-trotting template by making pit stops in London, Spain, Moscow and the United States. (This is a far cry from living one’s life “a quarter mile at a time.”) The original film in the series, 2001’s The Fast and the Furious, looks positively quaint by comparison, with its straight-faced SoCal street racing drama and pesky use of the word “The” in its title. Recently, the franchise has gotten faster and furiouser to increasingly lucrative results. That sort of thing isn’t supposed to happen when your movie has a “6” at the end of its title.

“Show me how you drive, I’ll show you who you are.”

When we catch up with them in Fast & Furious 6, master criminal/street racer/tank top enthusiast Dominic Toretto (Vin Diesel) and his team are still enjoying the fruits of their spectacular $100 million heist that destroyed most of Rio de Janeiro. Rogue FBI agent Brian O’Conner (Paul Walker) is content to raise his son with Mia (Jordana Brewster), Dom’s sister. (Dom playfully tries to steer the baby toward American muscle cars, while Brian prefers imports.) Their world is turned upside down when supercop Luke Hobbs (Dwayne Johnson) enlists the help of Dom and his crew to take down a devious mastermind named Owen Shaw (Luke Evans), who commands his own group of mercenary drivers. Dom agrees to help Hobbs because Shaw’s crew includes Dom’s presumed dead lover Letty (Michelle Rodriguez).

After getting the go-ahead from his current, superhumanly understanding girlfriend Elena (Elsa Pataky), Dom decides to go after Letty and reassemble his team: Brian, Roman (Tyrese Gibson, first introduced in the delightfully titled 2 Fast 2 Furious), Tej (Chris “Ludacris” Bridges, likewise), Han (The Fast and the Furious: Tokyo Drift) and Gisele (Gal Gadot, Fast & Furious). The services — and Spanish-language banter — of Tego and Rico (Tego Calderon, Don Omar, Fast & Furious) were apparently not required for this film. If Fast Five played out like a meathead version of Ocean’s Eleven, then I suppose you can call this film Sinister Six since our heroes face off against a team of supervillains. (In case it wasn’t obvious, loud-mouthed Roman overtly points out everyone’s evil doppelganger early on.)

Turns out Fast & Furious 6 is more of a “family” film than anyone expected because the biggest difference between Dom’s team of criminals and Shaw’s team of criminals is that Dom fosters a sense of loyalty and camaraderie within his squad. Unfortunately, the “bizarro” hook isn’t as effective as the heist angle from Fast Five because Shaw’s team simply isn’t substantial enough to make it totally click. I also could’ve done without the convenient amnesia for Letty; it would’ve been a lot more compelling if she remembered Dom ditching her and was still legitimately ticked off.

Diesel, Walker and the persistent butt shots of dancing girls may be the eye-catching paint job, but director Justin Lin has been this franchise’s engine for a while. Lin — along with screenwriter Chris Morgan — hopped aboard the moribund franchise with the stylish, related-to-the-series-only-in-title Tokyo Drift. Diesel cameoed at the end of that film, and the decision was made to bring back the franchise’s four original stars for 2009’s Fast & Furious. (Sneakily genius tagline: “New Model, Original Parts.”) With Five and Six, the duo seems to have found the sweet spot between Morgan’s self-serious scripts that still allow the likes of Tyrese/Ludacris/Johnson to riff, and Lin’s physics-mocking action sequences. (Instead of driving, I’m going to try to get to work on Monday by jumping from one car to another.)

In all seriousness, Lin has directed some of the most pulse-pounding action sequences of the last few years. Heck two of them are in this movie: the highway chase where Dom’s team tries to stop a tank(!), and the climactic race to bring down a cargo plane(!!) along the World’s Longest Runway. (Just for good measure, there is also some strong hand-to-hand combat, which gives franchise newcomer/former mixed martial artist Gina Carano a chance to shine). Lin’s practical approach to staging these scenes — relying on visual effects only when it’s necessary — gives them an extra charge. The straightforwardness of these films’ plots and action sequences has become smart counterprogramming to the current crop of summer blockbusters, which tend to stretch for Big Ideas and rarely feature earthbound heroes.

Meanwhile, the multi-culti heroes of this franchise are a major part of its appeal. African Americans, Latinos, Asians and Samoans are represented, as well as whatever Diesel is. (After all these years, he shrewdly refuses to really tell us.) We can debate Diesel’s acting skills, but all I know is that he seems to completely believe everything he spouts as Dom. Walker becomes the token white guy in this enterprise — and white guys don’t come much whiter than Paul Walker — while Rodriguez makes a welcome return to the franchise that popularized the tough chick “Michelle Rodriguez” persona she’s been reprising for the last decade in Avatar, Lost, Resident Evil and everything else she’s done. The script has fun mocking its performers — Johnson’s shiny muscles; Tyrese’s shiny forehead — and I continue to be delighted by Johnson’s uncanny ability to liven up blockbuster sequels.

Speaking of sequels, a seventh installment has already been Fast-tracked for a July release next year. Evans is a decent villain here, but a brief post-credits scene teases the biggest adversary the series has ever seen. (And, more improbably, somewhat connects Tokyo Drift to the other films.) A certain other blockbuster franchise is also releasing a highly-anticipated sequel this Memorial Day weekend. But while The Hangover Part III feels like a swan song, the Fast & Furious films show little signs of slowing down. So it feels most appropriate to say “till next time.”