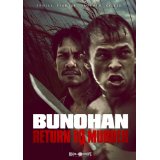 Usually when a kickboxing film comes along you pretty much know what to expect: a bunch of fighting with a paper-thin plot to string all the fights together.  When I got Bunonhan I thought I knew what I was getting into, and really I was just ready to sit back and watch some cool fight sequences.  Instead what I got was a complex story about families and betrayal where the fighting in the ring is just as deadly as the criminals that are willing to betray and kill anyone for money and land.

Bunonhan is nothing more than a little village where the lives of three brothers collide.  Adil is a young Thai kickboxer who’s made a living at the sport.  In a match where it seems he has no chance of winning, a fight-to-the-death match, friends quickly charge into the ring and carry Adil off to safety.  Though their intentions were good, Adil knows that this will only put a price on his head considering the amount of money the fight promoter lost.   The promoter hires a well known assassin to find Adil and kill him; the assassin hired just happens to be Ilham half-brother to Adil.

But there is more family dysfunction brought into the film as Bakar also comes to town to help take care of his ailing father.  On first appearances Bakar seems to be a well-adjusted man with a strong business sense, but the reality is he may be the cruelest character of the film.  The father owns a lot of beachfront land, some of which at one time was a cemetery until the bodies were relocated.  Bakar is looking to take the land and sell it to a group of people that seem to promise a lot of money.  The problem is the father believes each of his sons deserves their rightful share of land, and it is up to them to do with it as they please.  It’s because of this that Bakar sets his sights on Adil as well.

As this family drama unfolds we are given some amazing cinematography, the kind of impressive visuals I’ve come to expect from directors like Terrance Malick and Edward Zwick,, but on a much darker scale.  There seems to be a water theme throughout the film, whether it’s characters who live on a boat that is pulled up on shore, or characters wading through deep marshes, or simply walking along the beach.  I’m not sure if this is simply a cultural thing I just don’t understand, but I know it has some meaning to the story, I’m just not sure as to what it is.  To add to my confusion or depth to the film (I’ll let you decide) there is also a young boy who lives in the village of the ailing father; when the father talks to the boy he seems to be possessed by some kind of spirits.  The father is clearly haunted by the mistakes of his past and is doing what he can to right his wrongs.

The film seems to collide as a fight is arranged between Jolok, the fighting promoter who is owed money by some of Adil’s friends, Bakar, and Adil’s group.  Adil sees this as a way to clean his slate with Jolok and make some money to save his friend’s club, while everyone else seems to just want Adil dead and out of the way.

Though this has a rich and deeply-layered story, it’s hard to follow at times, and I kept feeling as though I were missing something. But despite feeling lost at times, what I’m sure of is that this is so much more than your typical Malaysian, Thai fighting cinematic romp.  Director Dain Said delivers a beautiful film about the heartbreak of family betrayal and how sometimes the family that truly matters may not even be blood related.  And for those looking for a cool action spectacle, though there are a few fight scenes and plenty of murder, most likely it’ll leave you wanting more.  One cringe-worthy moment (and for the wrong reason) comes with a character having their throat slit, and we are given a shot of CGI blood.  Nothing irks me more than seeing CGI blood; it’s like noticing wires not properly key-framed out of a scene.

Overall this was better than expected, but I wish there was more  Thai fighting to at least help keep the pace of the film going, because there are points where time simply seems to drag.  But for those of you looking for something not mainstream and you’ve seen all the good stuff in your Netflix queue, this might be what you’re looking for.

Brent Lorentson is a horror writer and film critic based out of Tampa, Florida. With a BA in Digital Film, he co-wrote and co-directed Scavenger Hunt. His short stories have appeared in various horror anthologies. In 2019 his short script Fertile Blood will be a part of the anthology horror film Slumber Party. He is currently working on his first novel A Dark and Secret Place set to be released in late 2019. Favorite Films: Taxi Driver, Fight Club, I Saw the Devil, The Wild Bunch, Dawn of the Dead, A Clockwork Orange, Pulp Fiction, Heathers, The Monster Squad, and High Fidelity.
Fast & Furious 6 Texas Chainsaw ( Blu-ray 3D)