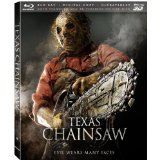 Forget about all of the sequels, remakes and copycats. At least that’s what original Texas Chainsaw Massacre writer/director Tobe Hooper wants you to do. As far as he’s concerned, Texas Chainsaw 3D is the official follow-up to the groundbreaking, flesh-tearing 1974 cult classic film. To bring the point home, Hooper has signed on as a producer and brought along the original Leatherface Gunnar Hansen and Marilyn Burns who played Sally, the girl who got away in the original film. Both have cameos here.

They say you can’t go back home again. In the magic world of movies you can always go back. In fact some argue that Hollywood has spent far too much time looking back than moving forward. Texas Chainsaw 3D takes you back to the highlight moments of the first film and then picks up the action just moments after the end credits began. That means creating the farmhouse and property of the Sawyer clan just as it looked in the 1974 film and matching it quite nicely in 2013. The result is an impressive journey back in time that would find even the most rabid fans at a loss to determine any significant differences between the two locations and houses. This time the film is shot in Louisiana instead of the titular Texas, but you’d swear nothing’s changed in 40 years. Of course everything about making a movie has changed, and that is the heart of this trip down memory lane. The place may look the same, but this isn’t the same Texas Chainsaw, not by a Texas mile.

The film begins with a showdown between Sheriff Hooper (Barry) and the Sawyer family. The sheriff’s name is an obvious homage to Tobe Hooper. It’s all brought about by the escape of young Sally. But before the Sheriff can bring things under control, a pick-up truck filled with the Hartman clan arrives to take justice into their own hands. Before the Sawyers can give up ol’ Leatherface to the law, the Hartman’s have burned the place to the ground killing every last Sawyer, except a baby girl who is collected by one of the townsfolk for his barren wife to raise as their own.

Jump 20 years later and baby Sawyer has grown up to be Heather Miller (Daddario), and she’s just gotten legal papers that tell her she’s inherited an estate from her recently deceased grandmother. The only problem is she thought all of her grandparents were dead. She doesn’t know who she really is…until now. Oops. She decides to take a posse of friends to Texas and check out her new property. At the house they release Leatherface, now played by Dan Yeager, and all hell breaks lose once again.

The film appears as though it’s just going to be another party group of teens on a misadventure road trip complete with the sex and drugs, and for a short while that’s exactly how it all plays out. Leatherface starts killing and teens do a bit of screaming and dying. We’ve seen it all a thousand times since the original film, and it was getting to look very much like there was nothing new to see here.

Then things begin to change. We find that the Hartmans have pretty much taken over the town, and the mayor is a Hartman. To the victors went the spoils. When they find out who Heather is, they decide it’s time to kill some more Sawyers. Here’s where the mythology of the franchise takes a massive left turn and makes Leatherface out to be almost a hero, of sorts. He puts himself out there to protect his newly-discovered cuz from the angry mob. It’s a rather refreshing turn that makes the impossible transition for Leatherface from brutal monster to somewhat sympathetic.

The cast of teens includes the usual throwaway slasher fodder. We don’t really get to know them, and we don’t end up caring when they get killed. The only performance that stands out here is Alexandra Daddario as Heather. She’s actually quite a good actress and knows how to work the emotional angle more than just an ear-piercing scream every now and again. The character goes through some changes that are important to the story, and Daddario does a fine job of selling it even with the really bad Elvira hair. Whoever made that choice needs to get it in the next film. It doesn’t hurt that she has killer eyes and knows how to work them.

The cast also includes the above-mentioned cameos plus a nice cameo by genre-favorite Bill Moseley as one of the ill-fated Sawyers at the start of the film. There’s also original film veteran John Dugan who reprises his role of Grandpa Sawyer. He gets the distinction of playing a reprised role the most years from the original portrayal. We get treated by the underused son of Clint Eastwood as a deputy. Scott Eastwood is starting to look more and more like the old man. I’m not sure if that’s a good thing or not. I could have absolutely used more from him here.

One of the oddest things about the 1974 Texas Chainsaw Massacre is how much we remember it as a gory film, when it wasn’t actually very bloody at all. It was ahead of the curve and certainly started a groundswell of very gory slasher films, but it was far more reserved than you remember. Rewatch it and you’ll be amazed at how tame it really was. The truth is the sound of that chainsaw and the image we conjure in our heads when we see it has created images in our minds that never really appeared on the film. This one is not extremely bloody either. It does suffer from the occasional use of CG blood. What will it take for horror filmmakers to realize that the stuff looks cartoony and never, ever really looks scary at all? There’s plenty of practical effects here as well, but director John Luessenhop couldn’t resist hedging his bets with a little computer cheating. Dude, it shows.

You get two versions of Texas Chainsaw 3D on the same disc. The 2D version is presented in its original aspect ratio of 2.40:1. The 1080p image is arrived at with an AVC MPEG-4 codec at an average 25 mbps. The 3D version is also in 2.40 and presented in a dual MVC codec with average bitrates of 15/10 mbps. The 3D image is pretty nifty here. The chainsaw itself coming at you is one of the more realistic “poke” effects I’ve seen in home 3D format. The film is understandably dark with solid black levels throughout. The film was shot natively in 3D which makes all the world of difference. It’s both easier on the eyes and a lot more immersive. You’ll notice wonderful spatial effects that pull you right into the action. The image is gritty, loaded with pretty solid detail and texture. I’m even more impressed with the image presentation because of worries having both versions on a single disc. Worry not.

The DTS-HD Master Audio 7.1 plants you square in the middle of the action. Expect nice sub response when that chainsaw is ripping. I swear I could smell the exhaust a few times. Dialog is quite clear and placed where it should be at all times. The surrounds are not exactly aggressive but work together to provide wonderful atmosphere and a truly immersive experience.

There are three Audio Commentary Tracks. The first includes director John Luessenhop and Dan Yeager. The least entertaining includes Producer Carl Mazzocone and Tobe Hooper. There’s too much mutual admiration going on here. The best is the Cast And Crew of the original film. They are obviously having a great time, and the interactions are golden.

Texas Chainsaw Legacy: (6:46) Tobe Hooper talks about Leatherface and how he fits with the classical monsters of an earlier era. There’s plenty of cast and crew talking about going into the franchise.

Resurrecting The Saw: (9:13) This focus is on the philosophy and approach to the film. The writers have a lot to say about working in such well-known territory.

The Old Homestead: (14:50) Members of the original cast along with other cast and crew gather at the recreated set of the Sawyer house and talk about the memories it invokes.

Casting Terror: (12:18) This is a huge mutual love fest. Yes, everybody loves everybody else. Don’t you just love it?

Leatherface 2013: (14:53) Meet the new Leatherface and sit in as he gets to hang out with his idol Hansen. There’s no question that he’s just about speechless meeting the original Leatherface.

Lights, Camera, Massacre: (11:31) This feature focuses on the 3D filming process. You get a good look at the equipment and the rigs they use to move the camera stuff around.

On Set Short Subjects: (33:19) There are six of these mini-behind-the-scenes features. Each looks at a particular scene and takes us into the production. There is a handy play-all option.

The kills aren’t exactly the most impressive I’ve seen. Yeager does an admirable job taking over the Leatherface persona. It’s just that the chase is so much better than the kill in the film. They are almost anti-climactic. There’s a pretty fresh scene where Leatherface chases Heather through a crowded carnival. There’s little question that the team tried to be fresh while remaining true to fan’s expectations. The crew is talking about tons of sequels they hope to do. “That’s a bit of a long story.”

Gino Sassani is a member of the Southeastern Film Critic's Association (SEFCA). He is a film and television critic based in Tampa, Florida. He's also the Senior Editor here at Upcomingdiscs. Gino started reviewing films in the early 1990's as a segment of his local television show Focus. He's an award-winning recording artist for Omega Records. Gino is currently working on his 8th album Merchants & Mercenaries. Gino took over Upcomingdiscs Dec 1, 2008. He works out of a home theater he calls The Reel World. Favorite films: The Godfather, The Godfather Part II, The Body Snatcher (Val Lewton film with Karloff and Lugosi, not the pod people film), Unforgiven, Gladiator, The Lion King, Jaws, Son Of Frankenstein, The Good, The Bad And The Ugly, and Monsters, Inc.
Bunohan: Return To Murder Dark Skies (Blu-ray)