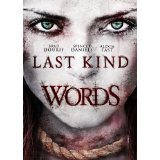 If I had to sum up Last Kind Words in one word, I’m afraid that word would be “forgettable”. Harsh, I know, but that is but the most fitting because the movie failed to leave a lasting impression. I don’t need much to find a movie entertaining: A steady storyline, interesting characters, and good dialog; my issue with Last Kind Words has to do with my uncertainty about the kind of film it was intended to be.

The story follows Eli (Spencer Daniels, This is 40), a seventeen-year-old only child whose family is forced to relocate to his father’s hometown after his father is laid off from his job at a power plant. His dad manages to secure work for the family on a farm owned by Waylon (Brad Dourif, Catch .44), the older brother of his father’s former flame who ran off back when they were teenagers. Despite being employed, the situation has put a strain on Eli’s home life as his father has turned to drinking to cope, making him very abusive towards Eli and his mother.

Not long after arriving while out exploring the grounds, Eli meets Amanda (Alexia Fast, Jack Reacher); a beautiful and mysterious girl. From their first contact, Eli is taken with Amanda but also very confused by the way she avoids answering his questions and her request that he not venture into a gated section of the farm. After mentioning Amanda to Waylon, Eli is disturbed by Waylon’s reaction. Waylon demands that Eli stay away from her, only fueling Eli’s desire to unravel Amanda’s story. Slowly, Eli begins to understand that Amanda may not be who she claims to be and the sinister connection that Amanda has with his family.

As I said earlier, I’m not sure what to make of Last Kind Words. It was classified as horror, but given that there was no moment of terror that does not appear to be the right genre. They are elements of drama with Eli’s home life and his deteriorating relationship with his father, but that aspect is only a focal point during the beginning stages of the film. The film attempted to create an urban legend backstory, but the addition of this subplot takes focus away from the film’s original plot (what that plot may be is anyone’s guess) and ultimately causes confusion. Simply put, there was not enough effort put into the plot’s development.

I will say on the positive side that the acting portion of the film had its moments. Most of those moments included Alexia Fast; she is an actress who has been getting more and more notice and for good reason. Beautiful and very expressive, I expect to be seeing much more of her in the future. Another good candidate would be Spencer Daniels who managed to display a litany of emotions including depression, shyness, and boldness.

I think under different circumstances Last Kind Words could have been a very different movie. There were plenty of raw materials for a decent film but final product was simply just too complicated plot wise. The best films are the ones that stay on target and unfortunately Last Kind Words was all over the place and should be used a learning experience.

Jeremy Butler is a film school graduate of the International Academy of Design and Technology. He is been writing for Upcomingdiscs since 2012; however, movies have played a big part of his life for much longer. Favorite genres include horror, science fiction/fantasy, and comedy. Favorite movies are V for Vendetta, Boondocks Saints, Kiss Kiss Bang Bang, and The Godfather.
Dark Skies (Blu-ray) Spend Your Memorial Day At The Beach…China Beach