Spend Your Memorial Day At The Beach…China Beach

Posted in: Release Announcements by Gino Sassani on May 27th, 2013 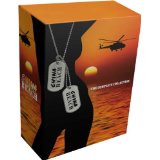 Here at Upcomingdiscs we’re getting in the spirit of Memorial Day by watching China Beach on DVD.

We’ll have a review coming soon. It’s a pretty solid way to remember the men and woman who served this country in Vietnam. The series is very much a tribute particularly to the women who volunteered not to take lives, but to try to save them. The series featured quite a few young actors who have gone on to pretty big things. They include Dana Delany from Desperate Housewives, Robert Picardo from Star Trek: Voyager, Marg Helgenberger from CSI, Michael Boatman from Arli$$/Spin City and Jeff Kober.

Time Life finally releases the entire series in a wonderful collection of 21 DVD’s, loaded with tons of extras.

A full review will be on the way at week’s end.

Gino Sassani is a member of the Southeastern Film Critic's Association (SEFCA). He is a film and television critic based in Tampa, Florida. He's also the Senior Editor here at Upcomingdiscs. Gino started reviewing films in the early 1990's as a segment of his local television show Focus. He's an award-winning recording artist for Omega Records. Gino is currently working on his 8th album Merchants & Mercenaries. Gino took over Upcomingdiscs Dec 1, 2008. He works out of a home theater he calls The Reel World. Favorite films: The Godfather, The Godfather Part II, The Body Snatcher (Val Lewton film with Karloff and Lugosi, not the pod people film), Unforgiven, Gladiator, The Lion King, Jaws, Son Of Frankenstein, The Good, The Bad And The Ugly, and Monsters, Inc.
Last Kind Words The Numbers Station (Blu-ray)