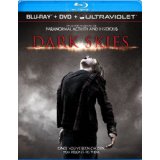 “Two possibilities exist: either we are alone in the universe or we are not. Both are equally terrifying.”

Just in case the film’s title wasn’t a big enough clue, this opening quote from famed science fiction writer Arthur C. Clarke makes it abundantly clear the domestic disturbance in Dark Skies won’t be caused by grumpy ghosts or a dastardly demon. This effective little sci-fi/horror movie follows the low-budget template established by recent hits like Insidious, Sinister and the Paranormal Activity franchise, but looks to the not-so-friendly skies for its source of terror.

Dark Skies opens on an idyllic, suburban neighborhood in Anytown, U.S.A. But the dread-filled score by Joseph Bishara (Insidious) lets us know there’s trouble brewing beneath the picture-perfect surface. With the 4th of July around the corner, the seemingly All-American Barrett family is hosting a barbecue, but the movie is quick to drop not-so-subtle hints about their domestic strife. Daniel (Josh Hamilton) is an unemployed architect hiding past-due mortgage notices from his wife Lacy (Keri Russell). Their oldest son Jesse (Dakota Goyo) spends too much time hanging out with neighborhood weirdo Ratner (L.J. Benet), while precocious younger son Sam (Kadan Rockett) starts seeing The Sandman from the scary stories Jesse reads to him over their walkie talkies.

Sam begins interacting with The Sandman at around the same time strange things start to go bump in the night. Lacy eventually becomes convinced her family has been targeted for alien abduction, a fact that is confirmed by Pollard (J.K. Simmons), a UFO expert she found online. (So he must be legit.) Writer/director Scott Stewart could’ve taken a more ambiguous, psychological thriller approach to presenting these events that made us think there was an earthly explanation. (Daddy Daniel seemed like a particularly prime candidate to suffer a mental breakdown.) However, as stated above, Dark Skies goes all in on the alien angle; we get our first, chilling sighting — these skinny extraterrestrials are known as “Grays” — within the first 30 minutes. (It’s also the movie’s best scare.)

Dark Skies follows the Paranormal Activity model of increasingly bizarre encounters — it starts with someone trashing the Barrett kitchen, but escalates via eerily sleepwalking family members and three different flocks of birds dive bombing into their home — that leads to the installation of cameras, but the film actually owes more of its cinematic DNA to Signs. It’s there in the fractured family dynamic, and the way they band together for the unintentionally silly climactic showdown with the aliens. Although this is an alien abduction flick through and through, Stewart — whose previous directorial efforts include the FX-heavy Legion and Priest — proves to be quite skilled at staging the film’s domestic drama. It’s no coincidence the encounters intensify as the Barretts’ lives continue to crumble.

For example, Lacy suggests they take little Sammy to therapy when his behavior becomes increasingly disturbing. Daniel insensitively balks at the potentially high doctor’s bills because the family is struggling financially. I appreciated the way that real-life wrinkle crept into the movie world, where this sort of thing is rarely a consideration. The well-played family drama is a big help in overlooking some of the film’s flaws. (I realize there’s a good chance it wouldn’t work, Barretts, but do you at least want to try leaving your house?!)

Russell and Hamilton do a nice job of playing out the Horror Movie Parent archetypes of Messy Mom and Doubting Dad. The relatability that first made Russell a TV star in Felicity is on display here with a welcome dollop of the maturity she has gained as a performer over the years. Hamilton adds a good dash of desperation as out-of-his depth Daniel. Goyo (Real Steel) does better-than-average “angry teenager” work as Jesse, while Rockett’s performance is too reminiscent of his Spooky/Spooked Kid forebears. Simmons pops up about an hour into the movie and gives a nicely understated performance in a part that would’ve been easy to overplay. Instead of being completely cuckoo, his UFO expert is an exhausted, downcast individual who may still be crazy but definitely represents the Barretts’ future if they don’t take drastic measures. Pollard is here purely for the sake of exposition, but Simmons delivers that information with subtle flair.

Any other subtlety the movie possessed gets beamed away during the film’s final act, which includes the absurd alien visitation that conveniently comes immediately after Lacy and Daniel have consulted the UFO expert. Dark Skies may have looked upwards for its horror inspiration, but the movie winds up delivering downbeat thrills.

Dark Skies is presented in its original aspect ratio of 2.40:1. The 1080p image is arrived at with an AVC MPEG-4 codec at an average of 22 mbps. This impressive video presentation belies the film’s modest $3.5 million budget. The Barretts’ picturesque neighborhood and their creepy nighttime encounters get the same amount of attention here. The Blu-ray gives us warm colors and sparkling detail for the former, and nice black levels with strong separation for the latter. Some horror fans probably prefer a little more spectacle with their scares, but this Dark Skies disc is still a fine visual effort.

The DTS-HD Master Audio 5.1 track turns out to be an unofficial character in the movie. One of the symptoms/symbols of alien visitation in the film is a tone that sounds like an intrusive ringing of the ears. The sound fills the room the same way it fills the Barretts’ heads. Dialogue is relegated to the front and totally intelligible, while the rears give us subtle neighborhood noises (like a dog barking in the distance) before exploding to life during a scene when the family’s burglar alarm is tripped and during the climactic fight with the aliens. Bishara’s sinister score comes with a persistent rumble that shows up nicely in the subs. It shakes the room to a much smaller extent than what’s happening to the Barretts, but it’s still a cool little effect.

Commentary with writer/director Scott Stewart, producer Jason Blum, executive producer Brian Kavanaugh-Jones and editor Peter Gvozdas: An interesting listen for anyone interested in low-budget moviemaking. Blum — founder of Blumhouse Productions — explains the low-budget/high production value template that made Paranormal Activity, Insidious and Sinister profitable. (Hint: keep the number of locations and speaking parts down.) The group admits Dark Skies was first pitched as a found footage film, but Blum prefers to use the device when there is no other way to tell a story. I think they made the right choice here: the seasoned actors and impressive production values served Dark Skies well.

Alternate and Deleted Scenes: (14:22) We get eight scenes that mostly focus on nosy neighbors that were smartly trimmed or excised (we didn’t need them to feel the family’s isolation) and an alternate ending that’s even more nihilistic than the film’s already bleak ending. (The “alternate” ending was actually the one in the original script.) Features optional commentary and a Play All option. Presented in standard definition.

Dark Skies is basically a mixture of Signs, Paranormal Activity and Poltergeist. The good news is I like all three of those films, so I didn’t mind seeing them rehashed in this engaging, slow-burning domestic thriller. The bad news is I still can’t decide if Dark Skies was ripping off those movies or simply paying homage. (Seriously, we all have to get together and definitively decide what the difference is between those two things. Let me know what your schedule looks like and I’ll try to work around it.)