Only The Young / Tchoupitoulas 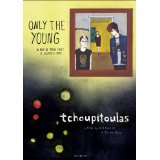 Oscilloscope Laboratories distributes unusual films. Unusual and special. They have packaged two documentaries together: Only the Young/Tchoupitoulas. The first is about kids wandering around a suburban wasteland in desert California. The second is about kids wandering the streets of New Orleans. They are very different experiences, but they are both about the flow of real life. They both have voices that are real and at times inspired. They are about avoiding dramatic structure and explaining and just revealing.

Documentaries used to be very predictable and somewhat uniform in approach, but all sorts of stylistic variations, conceptual approaches, and philosophies of content have been mutating over the last 40 years in respect to what defines a documentary. A documentary style that epitomizes the traditional approach is the style that Ken Burns exhibits. His prodigious output is meticulous and universally loved. It takes a subject and then thoroughly and extensively examines that subject with great reverence and detail, usually to be broadcast on PBS over many nights. This is best reflected in one of his most popular series, The Civil War. It usually involves photographs and videos when available with copious dramatic narration including famous actors reading from the words of historical figures. Then there is the example of Fredrick Wiseman, who would take the subject of some modern institution and then simply record footage of people enmeshed in the institution and allow those events to speak for themselves without narration. Between those two extremes many variations have occurred. The History channel is well known for playing fast and loose with the way they put together their “documentaries”. Many have a large percentage of dramatic re-enactments of events that may or may not have happened.

Only The Young is about two teenage skateboarders in a desolate suburban wasteland which features many abandoned properties. They are good-natured and docile in their aimlessness. At times they encounter potential girlfriends and new-age preachers, but they often resist changing. The story is formless and unstructured but revealing in character. It takes place over an indeterminate amount of time that could be years. Eventually we learn a little about who they are but not much else.

Tchoupitoulas also functions in much the same way but with some small differences. We follow three brothers as they spend one flavorful and adventurous time on their own walking through the New Orleans night. The style is like Wiseman’s but with even less constraints and structure. The aims and goals are limited to just observing people without trying to make them conform to a preconceived notion about what the end result will be. The belief of the filmmakers is that people’s lives are full of inherent drama and truth. Of course, the act of filming someone usually alters that truth, but this is a well known constant in the documentary process.

We have two films here that try to be as close to the purity of truth and reality as possible by not trying to put a structure on their subject. The problem is that then the viewer is often left to figure out if there is any meaning or point to the film. The positive here is that both films have engaging and enjoyable young protagonists. In both instances we come to care about them as people, and when the movies are over, we are left with many questions about what directions their lives will take.

The audiences for these types of films are small, and you have to applaud Oscilloscope for having the courage to support these little gems. If one compares them to fictional stories, they actually seem more meaningful and entertaining. Still, there is ultimately an unfinished quality to both films. Both these stories will evolve long after the cameras have been packed away and the filmmakers have gone home.