Posted in: Disc Reviews by Jonathan Foster on May 29th, 2013 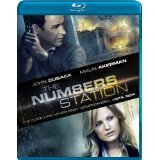 When someone tries to break in and take something from the building you’re in, what do you do? Well, according to “The Official Good Guy Handbook”, you must immediately lock down the building, retreat to a secure room, and try to get help from the outside. Of course, you must do all this while repelling the bad guys, ignoring their threats and bribes, and (of course) watching out for the double cross.

This is the problem CIA agent Emerson Kent (John Cusack, 2012) faces in The Numbers Station. After a botched black-ops mission, Kent is given one last chance. His new assignment: guarding Katherine (Malin Akerman, Watchmen), a code operator at a classified “numbers station” in England. It’s her job to receive coded messages and broadcast them to agents in the field. While bored with his assignment, Kent is always on the lookout for danger. This hyper-awareness is what saves their lives when they are attacked as they show up for their shift one day. Barely making it inside, they find the other team has been killed and a heavily-armed squad is waiting outside to take them out as well. Together, Emerson and Katherine must figure out what their enemies want and how to get out alive.

The Numbers Station is a typical siege movie, much like Panic Room or Assault on Precinct 13. It follows that formula exactly. Unfortunately, it doesn’t add anything to the recipe to make it unique. As such, this film feels flat. It’s like eating angel food cake; okay by itself, but it’s so much better when you put some toppings or filling into it. There’s nothing really wrong with the plot — so I can’t blast the story — but there’s nothing to really praise either. Even the villain has a stereotypical reason for wanting in the station. I kept hoping for a twist, an unexpected ending, or even something unbelievable like Godzilla showing up. Sadly, that never happened. The story just stayed bland and average.

If you have a bland story, you should at least have some great actors knock it out of the park. Unfortunately, Cusack and Akerman hit doubles at best. Cusack is essentially the same character he played in Con Air, with just a touch more badass thrown in. Akerman was one of the few bright spots in Watchmen, so I was happy to see her as the female lead. Unfortunately, due to bad directing or her personal choices, her performance feels phoned in. There are flashes of brilliance — like when she pranks Emerson or makes up wild theories about what messages she’s sending — but for most of the film, it feels like she’s holding back. As a result, her performance comes across stilted and doesn’t fit the tone of the film. I feel that this movie could have been better with some cast changes.

Another thing that hurts this movie is a lack of details. While we know that agents in the field use special notebooks to translate the numbered codes, the movie doesn’t explain how. It also doesn’t explain how the bad guys got in to kill the other team. They were able to get in and kill the other CIA operatives, but they can’t get back in to kill Emerson and Katherine?  Also, why is the bunker unguarded?  I realize action films don’t really need to be 100% plausible, but questions like these really take away from the film’s effectiveness.

The Numbers Station is presented with an aspect ratio of 2.40:1. The 1080p image is achieved with an AVC MPEG-4 codec at an average of 20 mbps. The video quality was good, considering the myriad of things that could have gone wrong with 85% of the film taking place in the broken bunker. With flickering lights, murky stairwells and the like, it would have been easy for things to be lost in the dark. However, everything — including Emerson’s dark jacket and black shirt while hiding in the shadows — is well defined thanks to solid black levels. The gloom and desperation are accentuated by good details, like seeing the beads of sweat on Katherine’s face or lines around Emerson’s mouth when he clenches his jaw.

The DTS-HD Master Audio 5.1 track served the film well. I liked how the flashbacks were a little muted to distinguish them from present day. Another nice touch was muting everything when Katherine temporarily goes deaf. Hearing things from her perspective made me pay more attention, at least for that portion of the film. All the dialogue was clearly heard, even the bad guy’s voice on the phone. The explosions sounded especially good in surround sound, filling all the speakers.

The Making of The Numbers Station: (14:26) This is your typical “Making of” documentary, featuring interviews with Cusack, Akerman, and director Kasper Barfoed. I didn’t understand Cusack and Barfoed’s claims that this was a “character-driven” movie. I didn’t see that at all. Presented in HD.

This is a typical siege movie; nothing more, nothing less. If that’s your thing (or if you really love John Cusack), then this movie is for you. If not, then I’d give this movie a pass.