Frank Zappa: A Token of His Extreme

Posted in: No Huddle by Archive Authors on June 3rd, 2013 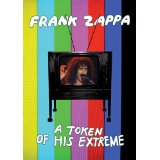 Has there ever been anyone like Frank Zappa? He had a rare combination of incredible professionalism and steadfast sobriety mixed with zany insanity and freakish detours on offbeat paths. He is the freak of all freaks of the sixties yet had an unwavering distaste for the rampant drug use of the time. His music couldn’t be more jarring or unconventional, yet he liked stately classical compositions to relax. A Token of His Extreme was a passion project for Zappa that he paid for with his own money back in 1974. It was produced with the intention of being an American Network Television special, but it never saw the light of day in the US.

The DVD also includes an appearance on The Mike Douglas Show in 1976 in which Zappa lamented about the television special. “This was put together with my own money and my own time, and it’s been offered to television networks and to syndication, and it has been steadfastly rejected by the American television industry. It has been shown in primetime in France and Switzerland, with marvelous results. It’s probably one of the finest pieces of video work that any human being has ever done. I did it myself. And the animation work that you’re going to see in this was done by a guy named  Bruce Bickford, and I hope he is watching the show, because it’s probably the first time that a lot of people in America got a chance to see it.”

The animation is exceptional using claymation in a completely free-form and surreal expressionism. The special is simply a concert with the animation offering visual accents. The music is familiar to fans

of Zappa, but if you are not initiated you will be dumbfounded. Firstly, the concerts are always filled with bizarre humor from beginning to end. The music itself is serious and experimental jazz but with constant idiosyncratic touches. Zappa indulged in many styles and probably could more easily be categorized under the heading of progressive rock. His guitar solos are extremely accomplished and endlessly inventive.

The song list includes, The Dog Breath Variations/Uncle Meat, Montana, Earl of Duke, Florentine Pogen, Stink-Foot, Pygmy Twylyte, Room Service, Inca Roads, Oh No/Son of Orange County, More Trouble Every Day, A Token of My Extreme. Those titles probably give you an idea of what I’m talking about.

Zappa’s most well-known band is called The Mothers of Invention, which is featured here. Well-known keyboardist George Duke appears also playing the finger cymbals. Many unusual instruments are implemented at various times. George and everyone else on stage are completely given over to the spirit of fun and laughter.

Of course, Zappa died in 1993 of cancer at the age of 52 and is sorely missed by many who cherish his unabashed individuality. He produced almost all of his over 60 records, and many additional collections were released after his death. This was despite his early death and a severe stage accident in in 1971.

There were actually two incidents. In one incident, an audience member set off a flare which burned down a casino in Montreux in which he was performing (immortalized in the Deep Purple song Smoke on the Water and Zappa’s own release, Swiss Cheese/Fire). Later that year in London, an audience member pushed him off the stage causing over a year and a half of rehabilitation.

His children, Dweezil, Ahmet, Moon Unit and Diva frequently collaborated in the later years and carried on his considerable legacy. A Token of His Extreme is just a small, tasty introduction to an incredible career full of invention, humor and weirdness. Check out Zappa.com for the continuation of the legacy.