Posted in: No Huddle by Brent Lorentson on June 3rd, 2013 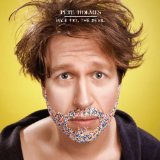 I was starting to think the only comedians that get hour long specials any more were the ones with obscenity-soaked acts that were sprinkled with sexual humor (or riddled with just as much).  But then Pete Holmes came along.  Throughout his hour long special that was recorded in Austin, Texas sure, there are a few obscenities and a little sexual humor, but he never uses it as a crutch to carry his performance along.  From the moment he stepped out onto the stage he reminded me of that friend from high school who was that all around good guy that always knew how to make you laugh.  With first impressions set aside and as the act progressed I was happy to see I wasn’t disappointed.

Considering this was an hour long special, Holmes manages to cover a variety of topics and make them relatable to everyone in the audience.  Whether it’s discussing how he used GPS to get out of a bad neighborhood, hating a girlfriend’s friends (or family), to the awkwardness of carrying a dog, Holmes manages to deliver these bits as situations we all could have experienced.

His last bit in the special where he discusses an experience when dealing with a telemarketer was my favorite moment of the special, and the most educational. (Did you know they can’t hang up as long as you’re not threatening them or being verbally abusive?) Whether this little bit of his is true or not, I still find it hard not to smile about this and contemplate my actions the next time a solicitor calls during dinner or my favorite TV show.  Though the performance didn’t having me rolling on the floor with tears burning my eyes, I still found it to be quite enjoyable.

The packaging for this stand-up special comes with both a CD and a DVD.  This kind of packaging with stand-ups is the way to go.  For those unfortunate to have to drive with me for any long distance, they’ve been stuck having to listen to this album with me; so far no complaints.  On the DVD there is another twenty-minute special with Holmes as well as two other appearances he did on John Oliver’s New York Stand-Up Show.

For those who may be curious to see more about this up-and-coming funny man, his website PeteHolmes.com is filled with videos of sketches and performances he’s done over the years.  This is free to the fans and is a good way to pass some time on the office computer or just browsing the net.  But the one nugget of info on the site that has me curious is that apparently Holmes will be hosting his own talk show following the Conan show on TBS.  Could Holmes possibly be the next big thing for television?  If there was ever a personality that could do it, I believe Holmes could be a fresh new look for late night comedy.

Brent Lorentson is a horror writer and film critic based out of Tampa, Florida. With a BA in Digital Film, he co-wrote and co-directed Scavenger Hunt. His short stories have appeared in various horror anthologies. In 2019 his short script Fertile Blood will be a part of the anthology horror film Slumber Party. He is currently working on his first novel A Dark and Secret Place set to be released in late 2019. Favorite Films: Taxi Driver, Fight Club, I Saw the Devil, The Wild Bunch, Dawn of the Dead, A Clockwork Orange, Pulp Fiction, Heathers, The Monster Squad, and High Fidelity.
Frank Zappa: A Token of His Extreme Upcomingdiscs Attends Attorney At Low Premiere