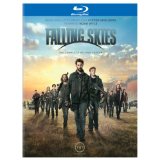 Bringing big-screen action and spectacle to the small screen is almost always a losing proposition. (A moment of silence for Terra Nova.) It’s just too hard to maintain on a week-to-week basis over the course of multiple seasons. Falling Skies — which, like Terra Nova, counts Steven Spielberg as one of its executive producers — may not be terribly original, but it’s one of the more successful attempts at consistently bringing large-scale thrills to television.

In case you missed the first season of TNT’s hit sci-fi series, here’s a quick catch-up. Less than a year after a devastating, worldwide alien invasion that wiped out most of Earth’s population, we meet the members of the Second Massachusetts Militia Regiment. (Better known as the 2nd Mass.) Tom Mason (Noah Wyle) is the history professor-turned-second in command of the 2nd Mass who frequently clashes with the more militant Captain Dan Weaver (Will Patton) and flirts with pediatrician-turned-combat surgeon Anne Glass (Moon Bloodgood). Tom has three sons: jockish oldest son Hal (Drew Roy), eager youngest son Matt (Maxim Knight) and middle son Ben (Connor Jessup), who was kidnapped by the aliens and outfitted with what humans call a “harness”, which affixes itself to children’s spines and allows the invaders to control their minds. A lot of the first season centered around Tom’s efforts to save Ben and culminated with the 2nd Mass’s attempt to bring the fight to the aliens in Boston. The final scene had Tom voluntarily entering a spaceship in an effort to keep Ben safe.

The second season premiere jumps forward three months with Tom’s unexpected return. Tom’s sons, Anne, and even Weaver are thrilled to have Tom back, while others — namely resident rogue John Pope (Colin Cunningham) — find it a little suspicious that the aliens would simply drop Tom off unharmed. That’s the crux of the first handful of episodes, but as the season progresses the 2nd Mass learns some of the alien invaders — comprised of the spider-legged Skitters, giant robotic Mechs, and fish-faced Overlords — are not exactly what they seem. There’s also word of a burgeoning human government forming in Charleston, South Carolina. It sounds too good to be true, but the 2nd Mass decides to head down south anyway.

Falling Skies takes its thematic cues from the Revolutionary War, with the aliens stepping in for the Big Bad British Empire and the 2nd Mass reprising the role of scrappy Americans. Season 2 is leaner — by the end of the first hour/“Worlds Apart”, we’ve already been shown Tom’s time on the spaceship and his long road back to the 2nd Mass — and meaner than the first, as the characters have become more hardened by battle. (Weaver, who has by now developed a grudging respect for Tom, is the slightly softened exception.) Still, what sets Falling Skies apart from other recent TV hits about a large group of people banding together following a calamity is its straightforward sense of hope and optimism.

The show isn’t interested in being as bleak as The Walking Dead or as philosophical as Lost. There’s plenty of death in Falling Skies — we’re told the 2nd Mass started with 300 people, but was down to 176 as they prepared to leave for Charleston — but the show can’t shake its rousing tone. The show was created by Robert Rodat, best known for writing Saving Private Ryan and The Patriot, so it’s no surprise history professor Tom often serves as a mouthpiece for America’s previous successes against long odds.

Wyle, best known for playing a doctor and a librarian, is a solid choice to embody the brainy and brave Tom. No matter how gaunt his face becomes or how scraggly his beard gets, the actor gives off an innate goodness. Meanwhile, Patton does a better job of showing how Weaver’s harshness comes from the immense responsibility he feels to the people who count on him to lead them. Other standouts include Cunningham doing his entertaining variation on the badass Sawyer/Daryl Dixon character, except his Pope (thus far) stubbornly refuses to soften. I was also impressed with Jessup’s conflicted performance as Ben, who hates the aliens for kidnapping him, but feels like an outsider among his fellow humans.

The rest of the performances can be a bit wooden, but the real star of Falling Skies is the action. The show blends practical effects with CGI for some of the most exciting and effective action sequences on the small screen. (Practically every episode features at least one human-on-alien firefight.) Standout episodes this season included the game-changing fifth episode/“Love and Other Acts of Courage” (the 2nd Mass considers teaming with a surprising ally in the war against the invaders) and the exhilarating Ep. 7/“Molon Labe” (a brutal siege in the 2nd Mass’s latest hideout). Falling Skies doesn’t rely on big name guest stars, but the great Terry O’Quinn (Lost) pops up in the final two episodes as Majority Leader Arthur Manchester — “President” seemed too presumptuous — a mentor of Tom’s who wants the two of them to become the next Washington and Jefferson. The season wraps up with a surprise pregnancy, another potential sleeper agent and a shocking new arrival.

Falling Skies is squarer and more straightforward than some of the slicker, more ambitious TV stories that have explored similar territory. The result is a show that may not reach greatness, but it achieves “really good”-ness very consistently while helping us get through the dog days of summer TV.

Falling Skies: The Complete Second Season is presented in an aspect ratio of 1.78:1. The 1080p image is arrived at with an AVC MPEG-4 codec at an average of 18 mbps. Overall, the Blu-ray gives us a decently sharp image (particularly in close-ups) that I actually think could’ve been dirtied up a little more. The gritty setting would’ve benefitted from some subtle, persistent grain. Instead, what we get are inconsistent instances of digital noise that tend to crop up during some dark/nighttime scenes. The CGI/alien effects mostly hold up to scrutiny; only a handful of FX shots involving fire look noticeably bad. Colors are appropriate muted, but black levels could’ve been deeper and better defined given that so much of the action takes place in less-than-ideal lighting. Falling Skies looks fine on Blu-ray, but it had the potential to look great.

The Dolby True HD 5.1 track is as straightforward as the show itself. We get some consistent sub activity during the frequent firefights. Those frantic battles are pretty well-balanced in terms of mixing dialogue with sound effects. I just wish the track had been more dynamic and immersive in the way the action was presented. Too much of the action is confined to the front speakers, which was a wasted opportunity to drop the viewer in the middle of the battle along with the 2nd Mass. (Instead, the high-octane score by Noah Sorota dominates the rears.) The scenes at the various 2nd Mass camps are also scattershot in terms of conveying the idea that there are more than 100 people milling around. Dialogue generally comes through clear as a bell. Like the visual presentation, this track feels like it’s shortchanging a show that obviously has great production values.

Audio Commentaries: There are commentary tracks for Episodes 1, 6, 7 and 10. They mostly focus on the technical aspects of the production, but the most interesting one features Wyle, director/producer Greg Beeman and writer Mark Verheiden breaking down the tricky first episode. The writers and producers played around with the structure of that first hour before finally settling on flashbacks (which the show doesn’t typically do) to show Tom’s journey.

One Page at a Time: Writing the Second American Revolution: (20:49) Showrunner Remi Aubuchon reveals he joined the show for season 2 and promptly found out the previous writers didn’t have any plans for Tom (or the show) after he boarded the ship. He also expresses the new season’s directive: “bigger, badder, faster, cooler.” We also get comments from cast members like Wyle, who states that, even though the show deals with aliens, the tone is closer to a war movie. IMPORTANT NOTE: This special feature appears in Disc 1, but it includes footage from the batch of episodes in Disc 2. Do not watch this until you’ve seen the whole season. (Unless you don’t mind being spoiled.)

A Fan’s Perspective — Touring the Set of Falling Skies: (8:59) Producers invited fans to tour the set and meet the cast and crew. Jessup and special effects supervisor Todd Masters lead the first part of the tour, while the rest of the actors talk about getting a boost from the fans’ enthusiasm.

Behind the Scenes Featurettes: (7:09) Four quick-hit promos: “Terry O’Quinn is Manchester” (1:46) previews the Emmy winner’s arrival, “Creating the Crawlies” (1:12) explores the aliens featured in the excellent seventh episode, “Designing the Spaceship” (1:23) quickly takes us inside the alien craft along with Tom in the season premiere, and “Team Skitter” (2:48) focuses on the puppeteers and performers who bring the Skitters to life. Again, you shouldn’t watch the first two mini-docs until you’ve seen the whole season. “Team Skitter” is the best of this bunch.

Season 2 Animated Trailer, Created by Dark Horse Comics: (1:13) The motion comic-style trailer portrays the off-screen Battle of Fitchburg and helps fill in the gap between seasons 1 and 2.

The Skitter Evolution: (9:47) A more in-depth look at the Skitters, including the challenges of mixing practical effects and CGI on a frantic TV schedule. The Skitters were all CGI in the pilot, but producers admit it was cheaper to use puppets. This is interesting stuff if you’re into creature effects. Also covers the creation of the harnesses and the spiky makeup on Ben’s back.

2nd Watch — A More Perfect Union: (30:58) Starting with season 2, Wil Wheaton (Star Trek: The Next Generation/Sheldon Cooper nemesis) hosts this online show where he talks to Falling Skies cast and producers about the latest episode. (Think Talking Dead.) Here, they dissect the finale while the host unsuccessfully tries to get concrete answers about season 3. Wheaton is clearly into the show, but his questions tend to take longer than the answers.

Season 3 Preview: (2:20) A quick peek and clips from the upcoming third season, including at least one massive new set and breathless testimonials from the cast.

I was initially lukewarm on the show, but found that it got better as the first season progressed. This batch of episodes was able to maintain that momentum.

Season 3 premieres June 9, so you better hurry up and grab this two-disc, 10-episode set if you want to catch up with the 2nd Mass by Sunday. Though the Blu-ray may be a bit underwhelming from an A/V perspective, the set makes it up to fans by providing strong bonus material.

China Beach: The Complete Series Frank Zappa: A Token of His Extreme