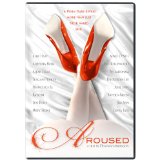 When a documentary is made about a subject and interviews are presented with a wide variety of individuals talking about a single thing, most of the time no one will question such a presentation. In this case, people are likely to question the intentions and ultimate content of the project. The film is directed by noted photographer Deborah Anderson, who has taken photographs of many famous celebrities like Elton John and George Clooney. She is the daughter of rock singer Jon Anderson from Yes. Aroused is about celebrities of a sort. The film includes extensive interviews with porn stars and their agent during the course of an extensive photo shoot. The question then becomes, “How serious is this project?” It turns out to be a somewhat serious examination of the psychological stress that these women have to go through. That said, there is a fair amount of nudity as the film progresses. Is it gratuitous or not? That’s not easy to say. I would say that if they wanted this to be taken seriously, they might have limited the nudity. Of course, it will probably have a higher level of sales with the nudity.

I can’t say I know many of the people being interviewed, but I will list some names for those of you who might know; Allie Haze, Ash Hollywood, Asphyxia Noir, April O’Neill, Alexis Texas, Belladonna, Brooklyn Lee, Francesca Lee, Jesse Jane, Kayden Kross, Lisa Ann, Misty Stone, Tanya Tate, Teagen Presley and Fran Amidor. Anderson wants to get to know the real women. Who were they before they became the stigma or pariah? Many of them came from sheltered or timid backgrounds. Some were married to ministers, and some went through strict religious training.

The overall presentation of the movie leaves me conflicted. The first half of the movie is interview-heavy, but gradually by the second half an element of exploitation starts to creep in. Anderson is a photographer and has organized a nude still photo shoot. More and more those shots are worked into the film. As a man, I cannot honestly say I understand a woman’s sexuality. Many of the women I have been with have surprised me with their aggressive side. Kinsey broke our conceptions of human nature wide open through the second half of the last century. It has been my impression that though men and women are different, they have equally intense responses to their personal relations.

This documentary tries to be serious and sympathetic about the subject. It tries not to cross the line into prurience.  Fran Amidor is the agent, and she is the one who gets the most real about the business. She finds much of it objectionable but justifies it because at least it might as well be someone like her who at least cares about the girls. These girls like sex, and they feel it is a great thing to get paid for what you love. They do learn that outsiders or what they like to call “citizens” do judge them. They realize it is very difficult for them to have a normal life. They have tons of fans who adore them, but more as objects than people.