Contest: Win Saving Lincoln From Pictures From the Fringe 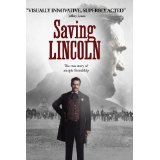 Our new friends over at Pictures From the Fringe have given us a copy of Saving Lincoln on DVD to give away to a lucky Upcomingdiscs reader. The unique film uses vintage Civil War photography to enhance the drama of the life of Abraham Lincoln. Saving Lincoln – featuring: Tom Amandes (TV’s “Everwood”), Lea Coco (J. Edgar), Penelope Ann Miller (The Artist), Bruce Davison (X-Men¸TV’s “Last Resort”), Josh Stamberg (TV’s “Drop Dead Diva”) Creed Bratton (TV’s “The Office”) and Saidah Arikka Ekulona (Righteous Kill).

Gino Sassani is a member of the Southeastern Film Critic's Association (SEFCA). He is a film and television critic based in Tampa, Florida. He's also the Senior Editor here at Upcomingdiscs. Gino started reviewing films in the early 1990's as a segment of his local television show Focus. He's an award-winning recording artist for Omega Records. Gino is currently working on his 8th album Merchants & Mercenaries. Gino took over Upcomingdiscs Dec 1, 2008. He works out of a home theater he calls The Reel World. Favorite films: The Godfather, The Godfather Part II, The Body Snatcher (Val Lewton film with Karloff and Lugosi, not the pod people film), Unforgiven, Gladiator, The Lion King, Jaws, Son Of Frankenstein, The Good, The Bad And The Ugly, and Monsters, Inc.
Charlie Zone (Blu-ray) Aroused