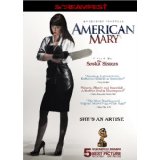 What’s a girl to do when her bills pile up, her hours at work get cut, and though she’s a promising medical student, life seems to be getting in the way of her studies?  Well, the “easy” answer seems to be, hit the closest strip club and put your natural assets to work. At least that is the direction Mary Mason (Katharine Isabelle) decides to take.  Though luckily as fate would have it, during her “audition” process an emergency occurs, allowing Mary to put her surgical skills to the test and make a quick five grand.  Was Mary’s decision ethical?  In this film you’ll need to throw out the books on medical ethics, because this is a tale of revenge at its core, but also about giving people what they want, to live the lives they believe they were meant to live.

As Mary comes to term with the procedure she tended to in the club’s basement, word of her handiwork has spread and she begins to get requests for procedures that even the doctors from Nip Tuck would have to reject.  After collecting ten grand for a procedure that transforms a woman to finally resembling a real life doll, Mary’s handiwork is then spread across the web, and she becomes all the more in demand.  Mary doesn’t go into this field of body modification lightly, as she still has aspirations to be a successful surgeon, but unfortunately that all comes to an end after she attends a late night surgeons’ party.  Unfortunately this isn’t your average party; it turns out to be an underground sex club where the surgeons bring girls, drug them, and rape them.  Considering one of the attendees happened to be one of her instructors who she looked up to, the hurt is only worse and is enough to push Mary over the edge to seek revenge.

Like most female revenge stories, you’ll find yourself rooting for Mary, even when some of her actions can be considered way over the top.  Unable to go to school and still fueled with the desire to become a surgeon, Mary simply dives head first into the world of body modifications where she performs the procedures in her apartment.  There are many times while watching this I was reminded of Audition; though it may not hold up to the film I consider a modern classic, American Mary still is a fun revenge film.

There was a moment that disappointed me, simply because there is so much buildup I wanted see the execution of what would have had to have been Mary’s most prized work.  The Soska sisters come into the club to meet with Mary about a procedure where the twins would be switching various limbs and parts.  So badly did I want to see how this Frankenstein mix would have turned out, but alas it was not to be, but bravo for still delivering a cool sequence leading up to it.

I’ve been following Katharine Isabelle’s work since seeing her in the 2000 release of Ginger Snaps.  Over the years she’s had appearances in Christopher Nolan’s Insomnia as well as a role in Freddy vs. Jason but never the starring role which I feel she deserves, at least until now.  Isabelle dives into this role where she can juggle being charming and funny while at the same time scaring the piss out of you.

Jen and Sylvia Soska have started to make a name for themselves in the horror community, and with them recently being announced as a directing team for a segment in the sequel to ABC’s of Death, their fame is only going to spread.  It’s great to see women stepping into the horror genre and willing to put out some hard-core horror.  Though the sisters didn’t have much of a budget, they managed to find a balance in delivering enough visual style without ever being overly flashy.  The script is fun even when getting into topics that are, simply put, disturbing, as well as including characters that are better left discovered than ruined in a review.

I dug this film; it may not deliver in scares, but it’s still a fun and fresh revenge film with a performance from Katherine Isabelle that I’ll be keeping in mind for October once we announce our favorite horror titles of the year.

Brent Lorentson is a horror writer and film critic based out of Tampa, Florida. With a BA in Digital Film, he co-wrote and co-directed Scavenger Hunt. His short stories have appeared in various horror anthologies. In 2019 his short script Fertile Blood will be a part of the anthology horror film Slumber Party. He is currently working on his first novel A Dark and Secret Place set to be released in late 2019. Favorite Films: Taxi Driver, Fight Club, I Saw the Devil, The Wild Bunch, Dawn of the Dead, A Clockwork Orange, Pulp Fiction, Heathers, The Monster Squad, and High Fidelity.
Paul McCartney and Wings: Rockshow (Blu-ray) Rectify