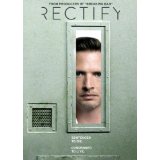 Imagine being arrested, not even finished with high school, and you are tried and convicted of the rape and murder of your high school sweetheart.  Try to imagine being locked away for 19 years in a cell, alone, awaiting your execution by lethal injection.  But then one day, DNA evidence emerges that seems to exonerate you for your crimes, and suddenly you are given your freedom back.  How do you go on?  This is question creator and executive producer Ray Mckinnon explores in the new series Rectify that airs on the Sundance channel.

Daniel Holden (Aden Young) is the man, whose life we follow from day one of his release from a Georgia state prison.  As his family anxiously awaits to see him, the media swarms outside waiting to hear from the newly freed man, all while Daniel nervously prepares to nervously step into the new life of freedom.  The writers made the wise choice not to rush but to allow us to tag along for every awkward moment Daniel has, from not remembering how to tie his necktie, to the feel of grass between his toes, to simply enjoying his first beer.  It’s easy to see how David seems to not fit in our world; after all nearly 20 years passed by without him, with only brick walls and a few other inmates on death row to keep him company.

This small Georgia town isn’t ready to accept Daniel with open arms; after all the attorney who prosecuted him, Senator Foulkes (Michael O’ Neil) isn’t going to allow it to look like he put an innocent man behind bars.  It’s a town that survived the heartbreak of losing an ‘innocent” child, and despite the reality of the crime that occurred, it’s a town that would rather view the crime through rose-colored glasses.  After all, if Daniel confessed to raping and killing his girlfriend, how could he possibly be innocent?

It’s hard to not watch this show and not think of the West Memphis 3 case.  The similarities in the case, whether coincidental or intentional, only seem to bring this closer to home, because in the news we see all the time a man wrongly accused who is finally released after serving 10 to 20 years behind bars.  But very little time is spent with the case; so little, in fact, it left me wanting to know all the juicy bits that are only alluded to in conversation.

Daniel’s family and support system seem to be more the direction the show wishes to go, which is fine by me; after all there are more than enough courtroom and police dramas filling the airwaves. Amantha (Abigail Spencer), Daniel’s younger sister, plays the part of the loyal sister championing Daniel’s innocence; exonerating her brother seems to be her life’s purpose, and it has taken its toll on her.  She has struggled for so long being the emotional rock for the family that it seems the only person she can have an emotional release with is Jon (Luke Kirby), who has taken over the role as Daniel’s attorney.

The aspect of the show that seemed to catch me off guard was how much religion plays a part in the latter half of the season.  Tawney (Adelaide Clemens), Daniel’s sister in-law, comes onto the screen as a figure of hope and kindness that Daniel has never quite experienced before.  In a town filled with sadness and bitterness, Tawney seems to stand out from it all, with her hope to help Daniel discover absolute forgiveness and be born again.  Does Daniel truly wish to seek salvation, or is he trying to move in on his step-brother’s wife?  Which presents another interesting dynamic to the show, why is his step- brother Ted Jr. (Clayne Crawford) so threatened by Daniel?  In one of the show’s most memorable scenes, Teddy questions Daniel in a playful manner about there being any truth to the prisoners getting conjugal visits; Daniel’s response is haunting and simply heartbreakingly real.

Though the show boasts it is from the producers of Breaking Bad, make no mistake, this isn’t nearly as intense or violent, but the quality of the writing is on par with some of the best dramas out there.  There is a lot of talking, loved ones struggling with their feelings and doing all they can to be normal in a situation that is anything but normal.  The direction and cinematography is exceptional.  When you see the contrast of the white, sterile environment of Daniel’s cell to the warmth of the outside world, we get to see through Daniel’s eyes how beautiful and overwhelming it all is, even when we all take it for granted.

With the second season confirmed for 2014, I’m more than a little excited to see how this story continues to play out.  Whether Daniel is innocent or not, the tragedy that plagues this town is impossible to look away from.  As the show explores the way we view justice, how society handles tragedy, and how we see a man struggle to reclaim the life he’s lost behind bars, I can’t imagine a more emotionally gut-wrenching show.  Sundance delivered with their first television drama, and they have set the bar for what is to come.

Brent Lorentson is a horror writer and film critic based out of Tampa, Florida. With a BA in Digital Film, he co-wrote and co-directed Scavenger Hunt. His short stories have appeared in various horror anthologies. In 2019 his short script Fertile Blood will be a part of the anthology horror film Slumber Party. He is currently working on his first novel A Dark and Secret Place set to be released in late 2019. Favorite Films: Taxi Driver, Fight Club, I Saw the Devil, The Wild Bunch, Dawn of the Dead, A Clockwork Orange, Pulp Fiction, Heathers, The Monster Squad, and High Fidelity.
American Mary Killing Lincoln (Blu-ray)