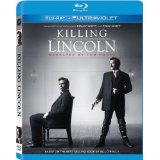 “On the evening of April 13th, 1865 John Wilkes Booth initiates his plan not only to kill Abraham Lincoln, but to decapitate the government of The United States.”

Whatever you may think of Fox News or Bill O’Reilly, it would be a terrible mistake to discount seeing Killing Lincoln because of purely political leanings. The Department Of The Interior tried it when the book came out and underwent a campaign to keep the book from the public gift shops with claims of inaccuracies. Give O’Reilly credit for not taking the accusations lying down. He challenged any of the naysayers to point out these mistakes and, of course, nothing ever came out of the accusations. That’s because the book is hauntingly accurate and tells a story most of you didn’t get in your American History high school classes…unless you happened to have been in any of mine over the years. I can tell you not only as a film reviewer but a former history honors teacher and avid presidential reader that this account passes every test you can put to it. Of course, it’s impossible to know every detail or intimate fact of an event we cannot witness. This comes as close as any production I’ve seen to date.

“The assassination of Abraham Lincoln is witnessed by more than 1500 people, yet no two accounts match. Even now, scarcely two hours after Booth pulls the trigger, the details fail to correspond. Mark Twain once wrote that the very ink with which all history is written is merely fluid prejudice. And so it is that an objective account of any historical event simply does not exist.”

It’s important to understand that an historical fact does not live in the past with the event itself. It thrives very much in the present and is a product of our own contemporary bias and prejudices. We create historic facts in the very telling. Hollywood has always had the very real problems of balancing that telling with the need to tell a compelling and dramatic story. In Hollywood, historical facts can’t be very still. Action must flow, and story must be served. Characters must be interesting. In the case of the conspiracy and assassination of Abraham Lincoln those needs are not in as much conflict as you might imagine. And while these events have been infused with the typical Hollywood flourishes many times before, Killing Lincoln demonstrates quite clearly that if done well, the truth can be just as intriguing, educational and entertaining as anything today’s screenwriters can concoct.

The film employs a unique blend of two different storytelling styles in film. There is very much a documentary feel to the entire piece. Tom Hanks delivers the narration and appears often on-screen with various props to tie together the key elements of the story. He’s a rather perfect choice for the job. He has an authority’s delivery that makes it easy to accept what he’s telling you, and he does so in simple terms, yet not so simple that you feel your intelligence has been offended. He has a bit of a personal stake in the entire affair as he’s a fourth cousin several generations removed from Lincoln himself. Lincoln’s mother’s maiden name was indeed Hanks. It’s Hanks’ job to make sure that the significant elements of the story are clear and presented in a logical way. He also reminds us of our journey’s end by providing a bit of a countdown. At various stages of the film he tells us how many days/hours Lincoln has to live.

The second style deals with the dramatization of the events. Now, we’ve all seen these low-budget dramas watching Discovery or History on television. They are about as lame a reproduction of events as you’ll find. Killing Lincoln combines the documentary aspect with a top-shelf movie within the documentary. The production design might not be on par with Spielberg’s recent Lincoln, but it certainly flies in the same stratosphere with many Hollywood films. The attention to detail is impressive as is the cast.

It wouldn’t be fair to try to compare Billy Campbell’s portrayal of Lincoln to that of Daniel Day Lewis. Suffice it to say that Campbell holds his own and finds his own unique way of inhabiting the familiar historical figure to a point that we readily accept that he is who the film says that he is. Jesse Johnson delivers a certain flair, and dare I say charm, as John Wilkes Booth. It’s easy to reconcile this character with the flamboyant and overly-dramatic persona I’ve read so much about in the history texts. It helps that the film uses these characters’ own words to give life to the dialog. Booth saw himself as a truly transformational figure and displayed little doubt in his own self-ascribed importance. He was obviously charismatic. How else would he have gotten others to share in such a bizarre and ambitious plot? Many would eventually lose their nerve, and none of the other conspirators were as successful in their tasks as was Booth himself. The film underscores the weak will of his company and almost portrays them as much victims of Booth as was Lincoln himself. If ever a conspiracy was personality-driven, this one was. The very best compliment one can pay the movie is how clear this is as we watch these events unfold.

I own and have read many books on Abraham Lincoln, as I have most of the presidents. Rarely, has a film or documentary left me with a feeling that there was so much more to discover. No question, I’ll be putting O’Reilly’s book on my literature wish list. The film has only left me hungry for more. It makes a wonderful companion piece to the epic Spielberg film, and there’s certainly room on my video shelf for both.

The film was produced by Ridley and Tony Scott. It was one of the last projects that Tony was involved in before he took his own life. The film is appropriately dedicated to him.

Killing Lincoln is presented in its original aspect ratio of 1.78:1. The 1080p image is arrived at with an AVC MPEG-4 codec at a solid 40 mbps. This is the kind of film where the high-definition image presentation might not appear all that important. Don’t tell the folks at Fox that story. They’ve given this a rock-solid image. The sharpness and detail put this far ahead of any film like this before. Black levels are wonderful, and the image presents you with the kind of texture that brings the costumes and Virginia locations to life.

The DTS-HD Master Audio 5.1 is pretty much there to serve the dialog, and that’s really what you get here. Surrounds come alive occasionally, but the film serves best in the front speakers. Subs aren’t really too active here. Again, there’s no need for fancy audio production here. Simple is the best policy here.

There is an Audio Commentary with Executive Producer Erik Jendresen. He’s almost out of breath at times, he wants to fit so much information into the track.

Uncovering The Truth – The Making Of Killing Lincoln: (22:22) Ridley Scott talks about being a bit of a history buff, and the film couldn’t be in safer hands. Authenticity is the key word throughout, and this feature illustrates that dedication.

Promotional Features: (10:26) There are five with a handy play all. They are 2-3 minutes each and cover casting and the director.

The story of Lincoln’s life and tragic death has been told countless times over the last 150 years. It’s one of the best known historical stories in American, perhaps in world history. It’s almost unthinkable that a new production could find anything new to tell us. Yet the wealth of new information here is quite astounding. For the first time we get a true sense of how a single man’s personality could drive such an event.

Gino Sassani is a member of the Southeastern Film Critic's Association (SEFCA). He is a film and television critic based in Tampa, Florida. He's also the Senior Editor here at Upcomingdiscs. Gino started reviewing films in the early 1990's as a segment of his local television show Focus. He's an award-winning recording artist for Omega Records. Gino is currently working on his 8th album Merchants & Mercenaries. Gino took over Upcomingdiscs Dec 1, 2008. He works out of a home theater he calls The Reel World. Favorite films: The Godfather, The Godfather Part II, The Body Snatcher (Val Lewton film with Karloff and Lugosi, not the pod people film), Unforgiven, Gladiator, The Lion King, Jaws, Son Of Frankenstein, The Good, The Bad And The Ugly, and Monsters, Inc.
Rectify The Bling Ring