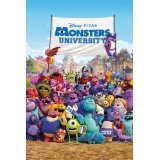 Who are “the boys”, you might ask. If you’re serious, then you might actually be reading the wrong piece. For the rest of you, “the boys” are Mike Wazowski (Crystal) and James P. “Sulley” Sullivan (Goodman). And it’s been a dozen years since we last saw them in Monsters, Inc. A sequel to that film might be a bit problematic. We learn that laughs provide far more power than screams, and we leave the power structure of Monsteropolis on its head. Pixar’s imaginative team took the best route available to them and decided to go the prequel pathway, and we get to see Mike and Sully as college students. Both have their sights on becoming master scarers. For Sulley, it’s in the blood. He comes from a long line of successful scarers, and he’s not really taking the college scene very seriously. For Sulley it’s about fun. Mike, on the other hand has stars in his eyes and works harder than anyone else on campus. But he might have to come to grips with the fact that he just might not have what it takes.

It’s a little unfortunate that we can’t, for just a couple of hours, forget that we’ve seen the first film. So much of the enjoyment of that movie was discovering this place and these characters for the first time. Repeated viewings have the reinforcement of wonderful memories and good times. That puts Monsters University in an awkward situation. On the surface it’s a much better movie than the first. There is more of a story here, and the characters have the advantage of having some history. That means the plot can put them into more complicated situations and allow what we already know and expect to fill in the gaps. Of course, the technology has improved no matter how impossible that might appear. The real difference is in the Sulley character. The computer-generated hair has come along way from the already excellent detail and texture we already experienced 12 years ago. Finally, the world is somewhat known to us, and we can enjoy the wonderful population of characters which include the return of rival Randy (Buscemi), and we learn how the rivalry started. Helen Mirren is abominably delicious as the dean and foil for Mike and Sulley which ultimately brings them together. The technology of the character is also light years from anything we’ve seen before. It all makes for a superior film in many ways.

Gino Sassani is a member of the Southeastern Film Critic's Association (SEFCA). He is a film and television critic based in Tampa, Florida. He's also the Senior Editor here at Upcomingdiscs. Gino started reviewing films in the early 1990's as a segment of his local television show Focus. He's an award-winning recording artist for Omega Records. Gino is currently working on his 8th album Merchants & Mercenaries. Gino took over Upcomingdiscs Dec 1, 2008. He works out of a home theater he calls The Reel World. Favorite films: The Godfather, The Godfather Part II, The Body Snatcher (Val Lewton film with Karloff and Lugosi, not the pod people film), Unforgiven, Gladiator, The Lion King, Jaws, Son Of Frankenstein, The Good, The Bad And The Ugly, and Monsters, Inc.
World War Z 23:59