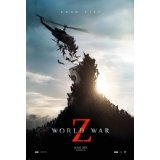 “Most people don’t believe something can happen until it already has.”

Walkers. The Living Dead. Zombies. Whatever you call them, you can’t deny they’ve shuffled their way into the forefront of pop culture. Once relegated to niche horror movies, zombies have crossed over into multiple genres, be it comedy (Zombieland), romance (Warm Bodies) or drama (The Walking Dead). The latest offering of the undead is World War Z, an action/horror film based on Max Brooks’ best-selling novel of the same name.

World War Z stars Brad Pitt (12 Monkeys, Ocean’s Eleven) as Gerry Lane, a retired United Nations investigator. Tired of seeing the worst of humanity — it’s mentioned he’s been to Chechnya and Darfur — Gerry is content to be a stay-at-home dad living quietly in Philadelphia with his wife Karin (Mireille Enos, TV’s The Killing) and two daughters. Their idyllic life is shattered one day when the undead overrun the city during their morning commute. Escaping the city, Gerry is recruited/coerced by his old bosses at the U.N. to help figure out how the zombie plague got started. Racing across the world, Gerry tries to find the information he needs before the zombies overtake the planet.

Let me start by saying I’m a zombie purist: I believe that zombies should be slow, relentless and tough to kill (excluding headshots, of course). Their slow, shambling walk is the main advantage the living have over them. So I was a bit disappointed to see the zombies in World War Z made the ones in Zombieland look like turtles. These zombies bring down the living with the ferocity of a cheetah taking down a gazelle. While I didn’t exactly love this aspect, I can’t deny that it upped the tension and the scare factor of this film, which helps the 116-minute running time fly by. Once I came to terms with their speed, I was impressed by how intimidating these zombies were. Their bite infects in a matter of seconds, they move in giant herds and they signal to each other with this terrible whining moan when they’ve found food. These aren’t your grandpa’s zombies; these undead are definitely a force to be reckoned with.

Brad Pitt does a decent job as Gerry. Another actor would be tempted to play Gerry as a gung-ho tough guy, but Pitt refrains from that stereotype, instead letting others do the heavy fighting. Pitt plays Gerry with a quiet determination and a resourcefulness that approaches MacGyver’s level. His scenes with Enos are quite moving, and they have good chemistry together.

Unfortunately, because Pitt is the lone big-name actor — and also one of the film’s producers — he must survive. There are several improbable circumstances that Gerry survives due to sheer dumb luck or he “just happens” to find the item he needs right there with him. While I don’t mind a little improbability and unrealism — this is a zombie flick, after all — this happens so many times, it borders on ridiculous.

Leaving the theater, I heard some people complain about the lack of gore. Personally, I found it refreshing. It would have been ridiculously easy for this movie to devolve into a George Romero-style bloodbath, but World War Z keeps the focus on the living, rather than dwelling on the zombie feeding frenzy. I also enjoyed the bits of humor — intentional or not — sprinkled into the film. Little things — like Karin calling Gerry’s phone right when he’s trying to sneak past some undead — help break up the tension, give us a breather, and show that the movie’s not taking itself too seriously. Matthew Fox (TV’s Lost) and David Morse’s (TV’s Hack) cameos also added to the humor as a wisecracking Navy SEAL and a sarcastic ex-CIA agent, respectively.

While World War Z is a solid zombie apocalypse film, feel free to skip the 3D showings. With the exception of one or two scares, the 3D didn’t really add anything to the film. I really hope there’s a sequel because this film only touched on the variety of stories that are in the book. Until then, keep your weapons handy and take a tip from Gerry Lane:  “Movement is life.”