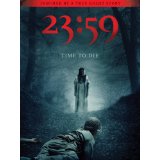 “Midnight is the most evil part of the night. If someone dies at 23:59 hours, his soul will not rest in peace and will return to the mortal world.”

Every culture has its own set of ghost stories. They’re usually passed around very late at night by a group of very impressionable young people. That’s precisely where 23:59 — an atmospheric and thoroughly effective Malaysian/Singaporean horror flick — picks up, with a group of army recruits on an island training camp sitting around telling spooky tales. The only thing missing was the campfire.

Actually, the very first scene of the movie is an eerie, wordless sequence in which a young girl without a face and a small boy with a little red ball visit one of the recruits in his cot. Following a cool opening credits sequence sketching out the island’s legend, we catch up with Dragon (Lawrence Koh), the resident jerk among the recruits. Dragon is holding court and telling the legend of 23:59 and the rest of the island’s haunted past: after the death of a pregnant medium, her baby was said to be possessed by a malevolent spirit.

Dragon’s story makes a strong impact on Tan (Tedd Chan), the cowardly recruit who was previously visited by the faceless woman. Tan’s boyhood buddy Jeremy (Henley Hii) tries to comfort his traumatized friend and protect him against Dragon’s cruel bullying. Jeremy has no tolerance for ghost stories because his father was a grifter who took advantage of people’s superstitions. When one of the recruits is found dead during a road march, the surviving members have to uncover the island’s secrets while fending off a seemingly vengeful spirit.

The bulk of 23:59 is set in 1983, but the film explicitly makes the point that these sorts of legends get passed down from one generation to another. Dragon tells stories of recruits who were previously victimized by spirits in the very same barracks he and his friends currently occupy, and the film wraps up with a present day coda that drives the point home. (Apparently, this army needs to worry less about fighting the enemy and more about being decimated by ghosts.) Writer/director Gilbert Chan has actually crafted a surprisingly layered horror flick that really didn’t need to resort to the “23:59” gimmick to grab our attention.

I like the decision to focus on brash Army recruits; the fact that most of the main characters are young and dumb makes some of the typically stupid behavior inherent in horror movies a little more acceptable. That being said, the characters manage to reveal a surprising amount of depth. Besides Jeremy’s transformation into a believer, jerky Dragon is revealed to be a character who takes his superstition very seriously. There’s also Sgt. Kuah (Mark Lee), the boys’ commanding officer who clashes with Captain Hong (Benjamin Lim), his pragmatic and condescending superior. Capt. Hong laughs off Sgt. Kuah’s suggestion that a ghost is attacking their soldiers, but he also doesn’t have a good response when Sgt. Kuah asks him why their army adheres to certain superstitious practices, like not marching on certain days.

Of course, this is still a horror flick and you came to see some scares. 23:59 clocks in at 78 minutes. Despite the relatively lean running time, Chan tells his story at a deliberate pace while sprinkling in some incredibly effective and stylish creep outs. I particularly enjoyed sequences involving a strong recruit not being able to do a single pull up because of some ghostly interference, the platoon picking up an unwelcome extra soldier during a head count, and a cool visual trick involving a bathroom mirror. I found each of these bits more effective than the rote, throwaway exorcism. As I mentioned earlier, the 23:59 gimmick becomes a bit marginalized as the movie progresses and new mysteries crop up — turns out Tan had a legitimate reason to be so jittery — and the film’s ghostly conclusion is a bit muddled and foggy.

Still, I was pleasantly surprised by how much I enjoyed 23:59. The film reinforces the idea that there’s nothing quite like a good, old-fashioned ghost story, regardless of which part of the world it comes from.