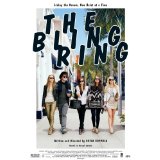 Proof that the internet in the wrong hands can be a dangerous tool; it was the highlight of celebrity news in 08 and 09; a rash home invasions and robberies committed on the residences of Lindsay Lohan, Paris Hilton, Rachel Bilson, Audrina Patridge, Megan Fox, and Orlando Bloom. As reported by TMZ and news outlets alike, the group broke into the celeb’s home stealing cash, jewelry, and apparel quickly earning the name “The Bling Ring.” News of their actions and their ability to avoid detection despite being caught on caught on a security cameras fueled the crime ring’s boldness as it was reported that the group returned to Hilton’s home several times after the original robbery. Ultimately, an anonymous tip lead to the arrest of the group’s ringleader and her original co-conspirator and when  it was discovered that this crime ring was nothing more than a bunch of teenagers, their story became so big that there was only one inevitable resolution: to make a movie about it.

Intercut with paparazzi shots of the celebs, the true crime story attempts to give a first-hand account of the group’s actions from its inception all the way to their arrest. We are shown how it all began with Rebecca and Marc (film’s version of Rachel Lee and Nick Prugo). Marc enters Indian Hills, an alternative school for the first time. Shy and friendless, he meets Rebecca on his first day and the two quickly bonded over a love of fashion and a at the time borderline obsession over certain celebrities.

Rebecca introduces Marc to her circle friends where he is quickly accepted and twosome  become best friends. A favorite past time of the two was walking neighborhoods, checking the car doors of luxury cars and stealing contents from inside if they were unlock. This crime quickly escalated as Rebecca inquired if Marc knew if any friends were out of town. Confirming that he did, the two broke into the home of the allege person, finding cash under the bed which they subsequently used for a shopping spree.

After their first home invasion, the two escalated again. Obsessed with the glamorous lives of their favorite celebs, Rebecca had Marc research Paris Hilton’s (the group’s first victim) home address and current, discovering she was out of town. The two broke into Hilton’s home and “went shopping,” as Rebecca was reported as saying. Fueled by the high of the forbidden and the swag, Rebecca soon recruited people from her inner circle including Nicki (film version of Alexis Neiers played by Emma Watson). Together the band continued to flaunt their actions until an anonymous tip lead to their arrest and eventual incarceration.

Never been much of a fan of true crime stories given that they have a tendency to take liberties and put their own spin on events in order to make the story more interesting. After watching The Bling Ring, all I can say on that score is if Sofia Coppola did took some liberties, I bet the real life parents of the real life perpetrators aren’t very happy with how they come off in the movie. Depicted mostly as clueless and negligent mostly, Coppola depiction gives the impression that the teenagers worked with total anonymity which comes off as comical and frankly a little ridiculous.

In my humble opinion, this movie shouldn’t have a theatrical release; the film played out more like a documentary than a movie, cutting back and forth between the gang’s actions and their preparation for prosecution. For me, the most gripping part of the entire movie was the film’s soundtrack. Also, though I love Emma Watson as much as anyone and thoroughly enjoyed the seductive way she portrayed the real-life Alexis Neiers, I do believe that too much time was spent on her subplot alone as it tended overshadowed plotline created for Lee and Prugo.

I’m not sure what Coppola was trying to accomplish with The Bling Ring, possibly how society’s obsession with the so called glamorous life ultimately lead to the group’s action or the lengths people will go to for notoriety but perhaps the overall film would have a more positive effect had everything not been so straightforward and predictable. There was no struggle, no inner turmoil. The entire exploit was more analytical rather than creative; the film version of a term paper.

Jeremy Butler is a film school graduate of the International Academy of Design and Technology. He is been writing for Upcomingdiscs since 2012; however, movies have played a big part of his life for much longer. Favorite genres include horror, science fiction/fantasy, and comedy. Favorite movies are V for Vendetta, Boondocks Saints, Kiss Kiss Bang Bang, and The Godfather.
Killing Lincoln (Blu-ray) World War Z