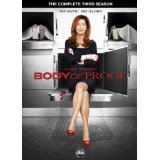 “The body is the proof. It will tell you everything you need to know if you just have the patience to look.”

Body Of Proof was a mid-season entry by the network two years ago; it debuted at the end of March and ran for only nine episodes that year. It was renewed, so it had the opportunity to develop into something better than what it was. After a full season last year, it was decided to retool the show considerably for the third year. It was all an obvious sign that the show with so much potential was having trouble drawing in enough viewers to keep it alive. The end has finally come, and those last episodes are now available on DVD.

Dr. Megan Hunt (Delany) was one of the best surgeons in the business. A car accident left her with some recurring numbness in her hand which led to her killing a patient on the operating table. Now she works somewhere where she can’t kill her patients because they’re already dead. She’s now a member of the Philadelphia Medical Examiner’s Office. Her boss is Dr. Kate Murphy (Ryan). Megan isn’t really good at taking direction, and Murphy has learned to accept that she won’t easily be commanded, because she’s good at what she does. The problem is that she’s quite abrasive and doesn’t sit very well with authority. Megan is divorced with a young daughter with whom she is trying to reconnect. It seems she lost her family because her work dominated her life and time.

In the lab there is Ethan Gross (Arend) who is the apparently requisite young geek who is pretty socially awkward and intimidated by the rest of his colleagues. Megan is no longer teamed up with the detective team of Detective Bud Morris (Lynch) who thinks she’s way too full of herself, but reluctantly admires her results, and Detective Samantha Baker played by The Wire alum Sonja Sohn. They were two of the casualties of the retooling work. Enter Detective Tommy Sullivan, played by Boston Legal’s Mark Valley. He once had a pretty serious relationship with Megan, and they begin the season fighting the connection. Of course, by the end of the show they are pretty much a couple. The history allows for some chemistry here, but it must have been like having the rug pulled out for the fans.

Each week there is a murder, and Megan ends up sticking her neck out to speak for the dead. If this sounds familiar, it’s because it most definitely is. It all began with Quincy back in the 1970’s and more recently with Crossing Jordan. Both of those actors (Jack Klugman and Jill Hennessy respectively) were more dynamic than Dana Delany, who comes over after a more successful job portraying the somewhat unstable Katherine on Desperate Housewives. The problem here is that all of her supporting castmates appear to be more compelling than she is. The cases don’t stand, and this is the kind of show that you can sit quietly and watch for an hour but forget about any of it minutes later. It’s tough when the top of the call sheet is badly cast. It’s nothing against Delany. I’ve seen her do far better work on other shows. It’s just not a good match.

I said before that I didn’t expect the show to last because the character is not a good fit for Delany. That continued to be a problem, and surrounding her with new castmates wasn’t going to change anything. The show was also a Philadelphia setting filmed in L.A. with too much very obvious green screen work. The show relied so much on the trickery that it always looked a bit “wrong” and out of place. They also tried to spice up the season by making Kate try a run for public office. There was an ongoing story that involved Megan’s father’s “suicide” that was a little too little a lot too late. The end result was an awkward series with some rather good writing that just never found a way to click on all cylinders.

When a show makes this kind of a last gasp, it almost never works. Not only does it never bring in new viewers who have already decided they didn’t want in, but it ends up angering the loyal followers who feel like their show has been turned upside down. Ratings just get worse, and the inevitable axe falls. But if a show falls and no one is watching, does it make a sound? To be fair, there was a ton of potential here; it was never realized. Delany’s a pretty solid actress, and fans are already thinking about where she’ll land. “It’s the American way. Everybody’s always thinking about what’s next.”

Gino Sassani is a member of the Southeastern Film Critic's Association (SEFCA). He is a film and television critic based in Tampa, Florida. He's also the Senior Editor here at Upcomingdiscs. Gino started reviewing films in the early 1990's as a segment of his local television show Focus. He's an award-winning recording artist for Omega Records. Gino is currently working on his 8th album Merchants & Mercenaries. Gino took over Upcomingdiscs Dec 1, 2008. He works out of a home theater he calls The Reel World. Favorite films: The Godfather, The Godfather Part II, The Body Snatcher (Val Lewton film with Karloff and Lugosi, not the pod people film), Unforgiven, Gladiator, The Lion King, Jaws, Son Of Frankenstein, The Good, The Bad And The Ugly, and Monsters, Inc.
Workaholics – Season Three (Blu Ray) Burn Notice: Season Six