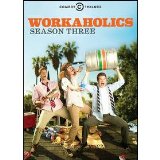 Every generation since “X” has lionized its slackers and frat boys with films (perhaps earlier if you look to Animal House as the beginning). Workaholics dances between this honouring of the stoner/slacker lifestyle and satirizing it. This show’s third season is just like the previous two. Three best friends, Adam, Anders and Blake, spend their work days with pranks, pot and parties on their minds, and each episode showcases their adventures therein.

These three indulge in so much “bro” talk, which entails frequent use of the words “bro,” “dude,” and turning as many words as possible into slang, usually by shortening them to one syllable if possible. A whole scene may go by where their English has been massacred to the point where I feel as if they are speaking an entirely new language. While many times this would seem to be a way of relating to the keg-tapping demographic, it can reach such a preposterous level, such as when Adam talks about getting a girl to put her “H on his D,” that it becomes more of a lampooning.

As I mentioned before, this show does feel like a satire of slacker culture. A lot of that relies on their failures. Whereas films like the Harold and Kumar series show stoners succeeding despite their best efforts to not make an effort, none of these three get very far with their adventures, and are frequently humiliated along the way.

There is also an interesting dynamic when Adam injects his religious beliefs into the adventures. Never does it slow down his intake of illegal drugs or activities, in fact it often becomes yet another thing that he bumbles with. If there is such a thing as being “bad” at being religious, Adam finds a way.

While it doesn’t paint slacker life as anything glorious, it does make it seem like a lot of fun. In its own strange way, this show contains a strong message for the value of friendship (didn’t see that coming in this review did you?). No matter what these three attempt, they do it all together, no matter how much failure awaits them.

For more reading about Workaholics on this site, check out a review by M.W. Phillips here:

Widescreen 1.78:1 1080p HD. The picture quality is rather clear. Despite the California setting, the picture never looks sun-bleached; and the interiors do not suffer from a florescent light haze. An HD presentation to be proud of.

Dolby TrueHD 5.1 and Stereo are available. The dialogue may be indecipherable at times, it’s never the fault of the audio track quality. The words (jumbled as they are) sound very clear and are mixed well with the occasional blasts of hip hop music; which are very bass heavy but not overpowering in all the speakers.

Bloopers: Some of these are the actors goofing around as the camera keeps rolling after a take. Of course, there are also the usual line screw ups and various hiccups the actors get.

Alternative Takes: Sometimes this is simply a matter of a different set of camera angles or longer cuts. In a show like this are rife with chances for improvising we also get multiple takes with variations of a joke that didn’t make the final cut.

Drunkentary on all Episodes: Feeling lonely? Not watching this blu ray with your buddies? Well here’s a simulator for you. The stars/writers (Blake Anderson, Adam DeVine, Anders Holm, and co-creator Kyle Newacheck ) of this show get drunk, eat snacks and record a commentary track that offers little to no insight into the production of this show, but rather feels like a bunch of dudes palling around…whic is exactly what it is. They earnestly lose track of what they’re doing and talk aloud about their plans to see movies, chips they like and so on. It’s your “bro” track for those times when you couldn’t assemble a crew to sit and watch with you.

“My Queen” Music Video: Not listed on the case but on disc two, there is a music video starring Erik Griffin as Montez in a funny, but rather unnervingly sexualised ballad to Montez’s wife.

The Other Cubicle Episodes: This is a series of very short sketches starring the older, multi-ethnic characters who work in the cubicle that is adjacent to our main three dudes. Their antics can be just as crass but rely less on “bro talk” and stoner references.

And now to answer the only question you really need to ask when it comes to a comedy show…is it funny? For the most part, yes. If you can stomach the aforementioned “bro talk” through all 20 episodes of this season, then you can certainly find some chuckles in the clowning.