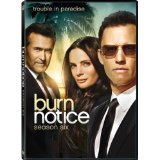 Burned, Recruited, Coerced, Betrayed, and Framed; in the past five seasons of Burn Notice, Michael Westen has been all of these things. The constant fluctuation in his ever-changing status is enough to drive a person mad, but through it all Michael has managed to stay level-headed and remain confident that he would find a way out. That confidence in his abilities is no doubt sustained by the support of his eternally loyal love, Fiona Glenanne. Fiona is Michael’s anchor; she keeps him centered, and as evident in last season when Fiona was framed for a bombing by Anson, Michael will go to any extreme to keep her safe; he needs her. However, when Season 6 opens up, Fiona has turned herself in to FBI to protect him from being used. What will Michael do now that the love of his life may be gone forever?

Season 6 picks right where the last season left off: Fiona turns herself in to the FBI and is taken into custody as Michael watches. Unable to save her, Michael becomes a man on a mission as he enlists the help of Sam, Jesse, and CIA officer Dani Pearce (Lauren Stamile) to find Anson (Jere Burns) and bring him in to clear Fiona’s name. Michael receives word of Anson’s plans to flee Miami as his identity has been compromised and he is being hunted. He catches up with him but is forced to let him go, condemning Fiona to her fate.

All hope is not lost, however; Michael still has cards left to play. This particular ace in the hole would come in the form of Michael’s former mentor and trainer, CIA officer Tom Card (John C. McGinley). Michael comes to a deal with Card: in exchange for Michael’s assistance in some covert ops, Card will give Michael the necessary resources he will need to locate Anson and bring him in. To save the love of his life, Michael undertakes some of the most dangerous missions in a long career of dangerous missions. Before long, lines are crossed, friends turn into enemies, and a beloved cast member is lost forever.

Since the show’s inception, Burn Notice has transformed USA Network in my opinion. Before its arrival the network was a channel of reruns and redubbed films, but when the Jeffrey Donovan-led mystery dramedy made its appearance, it soon became the gem of the network, and with good reason. It’s equipped with intricate and suspenseful storylines, unique narrating style, and a cast dynamic far beyond many competing series. I have been watching since the pilot, and after six seasons and 98 episodes, I can still say that I am completely engrossed by the series.

Every conspiracy leads to an even bigger conspiracy; that is Burn Notice’s principle theme. The life blood of the show is its ability to continuously introduce a new big bad midway or towards the end of the season without the idea of becoming stale and boring. The devil is in the details, and the show definitely does its homework in that respect, more often than anything else choosing to bring back a character from the past to stir things up such as this season with the reappearance of one of Michael’s original nemesis, Jason Bly (Alex Carter). As great as it is to have a character make a reappearance, it is even better when a new character is introduced and you think you have them peggged and they do a complete 360; such is the case with Tom Card.

Alas, as great as the series is, all good things must come to an end. Truer than that is that it is better to retire on top; Burn Notice announced that it would be concluding its run after the seventh season which premiered June 6. The mystery will be coming to an end, but Michael Westen’s lesson on spy craft will not be forgotten.

Jeremy Butler is a film school graduate of the International Academy of Design and Technology. He is been writing for Upcomingdiscs since 2012; however, movies have played a big part of his life for much longer. Favorite genres include horror, science fiction/fantasy, and comedy. Favorite movies are V for Vendetta, Boondocks Saints, Kiss Kiss Bang Bang, and The Godfather.
Body of Proof: The Complete Third Season Stoker (Blu-ray)