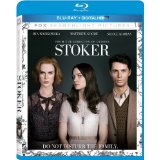 “My ears hear what others cannot hear; small faraway things people cannot normally see are visible to me. These senses are the fruits of a lifetime of longing, longing to be rescued, to be completed. Just as the skirt needs the wind to billow, I’m not formed by things that are of myself alone. I wear my father’s belt tied around my mother’s blouse, and shoes which are from my uncle. This is me. Just as a flower does not choose its color, we are not responsible for what we have come to be. Only once you realize this do you become free, and to become adult is to become free.”

If you are a fan of director Chan-wook Park, you are used to the kinds of bizarre images and somewhat enigmatic story elements that dominate the landscape of Stoker. While none of the images here reach quite into the territory of Oldboy, it’s hard not to plug into the disturbed nature of the film’s themes and story. I left the movie with more questions than answers and a little bit lost as to how exactly I was going to approach this review. I had not seen Oldboy at the time of the viewing or since. I did go out of my way to get some exposure to the film’s famous imagery through clips and stills. Even still, I’ve never been more confused about a film than I am about Stoker.

“Sometimes you need to do something bad to stop you from doing something worse.”

Let’s start with what we can nail down of the plot. This is one of those films which starts toward the end. India Stoker (Wasikowska) is a very disturbed young teenager. She’s a social misfit and is rather shy in public. She was terribly close to her father. He was pretty much the only thing that anchored her in any kind of reality. He dies in a horrible car crash on her 18th birthday. She’s left alone in a large estate with her mother (Kidman). This is the day we “come of age”, some say, and that’s very much what happens to India. Her Uncle Charley (Goode) visits and ends up sticking around. She finds herself drawn to this uncle she didn’t even know she had. They do not really speak much but appear to have some dark connection. We get the feeling that he is there to guide her through this “coming of age” moment in her life. We quickly discover that he has an incredibly dark and morbid mind. He mentally seduces both mother and daughter but in very different ways. It is all leading to some very disturbing places. While it is never revealed or overtly suggested, I got the feeling that Park was trying to tell us that Charley might have been her actual father. His relationship with Mom was certainly suspicious. Of course, there are links to her father that suggest she might have inherited her bloodthirsty ways.

This is Chan-wook Park’s first English language film. He might have used the language, but he hasn’t abandoned the style he’s become known for. There are some incredibly shocking moments in this film that I assure you will not sit too well if you have a high sensitivity to these sorts of things. It’s not so much a gory film but one with juxtaposed symbolism that includes a rather tame eroticism with death and darkness. We journey into India’s mind and visit places you may wish that you hadn’t. If his intention was to shock and perhaps provoke thought, the movie is a huge success. If he intended something on the order of tight pacing and story, the film falls considerably short of the mark.

Stoker is presented in its original aspect ratio of 2.40:1. The 1080p image is arrived at with an AVC MPEG-4 codec at an average 35 mbps. The high-definition image presentation is quite impressive. Colors like red on a door or a yellow umbrella stand out in wonderful contrast to the dreary atmosphere of the piece. Park is absolutely a visual director, and it’s here that the release shines. Detail and texture are not random here. It all takes advantage of the sharp image to deliver you into this bizarre and somewhat misshapen world.

The DTS-HD Master Audio 5.1 is a quiet presentation. There are some nice immersive surrounds that bring you into this world. Insects or a faraway woodpecker combine to fill the illusion. Dialog is usually quite soft, and there are great moments of near-silence here. There is a piano piece that pierces the usually soft audio presentation with the most crystal-clear and dynamic music I think I’ve heard in a piano track on film. It becomes manic and aggressive as it plays about the relationship between India and her Uncle. It’s the most impressive scene in the film and also the most dynamic audibly.

Deleted Scenes: (10:01) There are three with a play-all option. The first two are merely extended scenes introducing Charlie and later Auntie Gin. The last is an extended ending without the complete f/x.

Stoker – A Filmmakers Journey: (27:50) This is the behind-the-scenes stuff. It’s an intimate look at the soft-spoken Park. It does tend to become very much a love-fest.

Theatrical Behind The Scenes: This is a series of promo pieces that touch on the international poster, characters, direction, production design and music.

Red Carpet Premier: There are two parts. There are 15 minutes of raw footage set to the film’s song. It gets a bit annoying after a short time. The second is a music video.

The true shining star in the film is the performance of Mia Wasikowska as India. She sells the morbid girl to a very chilling degree. She’s able to sell the mood, and that makes everything all that more disturbing. There’s not an ounce of the real actress here. She’s sold completely to the reel character and never gives us a second of relief. That in itself only helps to feed the disturbing feeling you get. It’s honestly emotionally exhausting, because there is never any letup. Don’t look for comedy relief or even a breather. The pace rolls along like honey in an Alaskan winter. Park puts you immediately into a state of mind and holds you captive for 99 minutes. The question you have to ask yourself is if you are willing for him to do so. Did you ever get into a ride like a rollercoaster and have a second thought just as you realized it was too late? That’s how you’ll feel about Stoker after just a couple of minutes. All you can do then is “pray for strength“.

Gino Sassani is a member of the Southeastern Film Critic's Association (SEFCA). He is a film and television critic based in Tampa, Florida. He's also the Senior Editor here at Upcomingdiscs. Gino started reviewing films in the early 1990's as a segment of his local television show Focus. He's an award-winning recording artist for Omega Records. Gino is currently working on his 8th album Merchants & Mercenaries. Gino took over Upcomingdiscs Dec 1, 2008. He works out of a home theater he calls The Reel World. Favorite films: The Godfather, The Godfather Part II, The Body Snatcher (Val Lewton film with Karloff and Lugosi, not the pod people film), Unforgiven, Gladiator, The Lion King, Jaws, Son Of Frankenstein, The Good, The Bad And The Ugly, and Monsters, Inc.
Burn Notice: Season Six Saving Lincoln