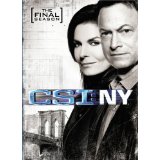 And then there was only one. More than a decade after CSI began to spin itself off to Miami and then New York, the last standing series is the original. And while even the franchise flagship has undergone cast and even style changes, it remains a ratings winner and appears to maintain an appeal the other shows never could quite capture. Not that we can call either of these spinoff adventures a failure. Both saw pretty much a decade, which is far longer than 90% of television shows ever see. Both had their own unique vision and niche that appealed to a broader group of fans. And while I never completely warmed up to the Miami version, I always rather liked the New York version, at times better than the original.

The reason could be found in the person of Gary Sinise. He’s a strong actor, and he happen to have fallen into the perfect part. He became Mac Taylor for most of the fans, and it will be a lonelier television landscape without him.

The CSI phenomenon has been going strong for many years now, and CBS has ridden that wave to become the top network these past couple of years. It all started with the original CSI: Crime Scene Investigator. This Las Vegas show became an instant hit, and three years later we found ourselves in Miami for a spinoff. Two years after basking in the Florida sunshine, Jerry Bruckheimer caught lightning a third time; this time out New York would serve as the setting. While there are ties that bind the three shows to the CSI franchise, each show has a unique style. The cases also serve to distinguish the shows from one another. The leads for the three shows likely give the most character to the series. Gary Sinise as Detective Mac Taylor brings a strength that establishes this show’s credibility from episode one. Taylor is ex-military who lost his wife in the 9/11 attacks. He’s incredibly driven and passionate about bringing down the bad guys, but won’t allow his integrity or that of his lab to be compromised. Also, the New York show differs from the original in that the CSI personnel are full-fledged cops and not just lab rats working for them. I find I like this version far better than the Miami setting, even though I can relate more to the Florida locations essentially in my own back yard.

The show does share some of the qualities that have become traditional essentials for the CSI franchise. Each opens with a song from The Who. I was bummed to hear that the original selection for New York was not Behind Blue Eyes, one of my favorite Townsend compositions. It would have been a far better selection. New York has the same narrative style, which usually allows for an “A” crime and a “B” crime. The mandatory lab montages are intact, as are the CGI recreations of some of the internal body demonstrations. The show, like the others, focuses on the CSI team. Sela Ward is former FBI Agent Jo Danville. She specializes in the mental aspects of the crime. She’s the team’s answer to a behavioral science unit and works closely with Mac. Detective Danny Messer (Giovinazzo) is all New York from the accent to his habits. He’s the kind of tough, no-nonsense New Yorker from an ethnic Italian hood who, you get a sense, could have just as easily gone the other way in the world of real-life cops and robbers. He’s married to Detective Lindsay Monroe (Belknap), often called Montana, a country girl adjusting to the big city. Messer often looks after her like a sister, and these two have developed another of the show’s good character chemistries together. Now they have a kid, and the relationship has taken another step in its evolution. Dr. Hawkes (Harper) started the series as the medical examiner, but now works as a CSI detective. Dr. Sid Hammerback (Joy) took over the medical examiner duties when Hawkes left. He’s a thorough doctor who is always looking that one step further than usual and often discovers what another medical examiner might have missed. Detective Don Flack (Cahill) is the beat detective who most often works with the team.

I do not get the idea that they saw the end coming. The theme for this season was to get in episodes that allowed each actor a chance to really explore the background lives of their characters. It’s a fitting idea for a show’s last season, but they obviously expected more time and did not get to everyone. In the show’s bonus features they talk about exploring the remaining characters in the next season, one they obviously didn’t know wasn’t coming. These episodes provide the fuel for the final season and give the fans a good bit of closure for those characters.

These episodes are pretty much “A Day In The Life” of a particular character. Detective Flack spends his day with family attempting to spread his father’s ashes. Lindsay goes home to Montana where she must face tragic events from her own past. Mac is in Vegas where he crosses over with the original show and cast. Danville believes she has a stalker, but finds that she is, indeed being watched. She meets the person whose life was saved by her sister’s transplanted heart. It’s a season of bittersweet journeys that should have had a little extra time to resolve.

Extras include a few 3-4 minute production features that are episode-specific. There are deleted scenes and the usual gag reel. You also get the complete CSI cross-over episode. I love it when the networks think ahead to do this. There’s nothing worse than watching a show on a disc you paid for only to find out you only have half the story. Extra credit all around here.

CSI: New York won’t be with us next year. I understand it was a close call but ultimately, it goes back to the original. In this case, there’s no question the first show was the best. That doesn’t mean there wasn’t a little room for Mac Taylor and his crew. “I realize the political implications of this, but we deserved more time.”

Gino Sassani is a member of the Southeastern Film Critic's Association (SEFCA). He is a film and television critic based in Tampa, Florida. He's also the Senior Editor here at Upcomingdiscs. Gino started reviewing films in the early 1990's as a segment of his local television show Focus. He's an award-winning recording artist for Omega Records. Gino is currently working on his 8th album Merchants & Mercenaries. Gino took over Upcomingdiscs Dec 1, 2008. He works out of a home theater he calls The Reel World. Favorite films: The Godfather, The Godfather Part II, The Body Snatcher (Val Lewton film with Karloff and Lugosi, not the pod people film), Unforgiven, Gladiator, The Lion King, Jaws, Son Of Frankenstein, The Good, The Bad And The Ugly, and Monsters, Inc.
The Rambler (Blu-ray) Unforgettable: The First Season