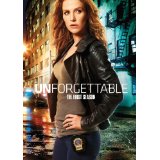 “Only a few people in the world have the ability to remember everything. I’m one of them. If I miss something the first time, it’s okay; I can go back and look again. My life…is unforgettable.”

You’ve got to admire the courage of the person who decided to call this show Unforgettable. He or she had to know they’d be leaving themselves open to easy pot-shots from viewers and snarky critics like me if the drama series failed to make a lasting impression. And, for a while, it looked like this Unforgettable: The First Season DVD set might wind up being Unforgettable: The Only Season. After sitting through the first season of CBS’s umpteenth procedural drama, I can see why the network initially canceled the show. But I can also see why they decided to bring it back.

Carrie Wells (Poppy Montgomery) is a former Syracuse detective with hyperthymesia, a rare medical condition that allows her to remember everything she sees or hears. Unfortunately, the one (crushingly inconvenient) part of her life Carrie can’t remember is the murder of her sister Rachel when they were both children.

When we meet Carrie, she’s living in New York City, volunteering at a nursing home (with people who can barely recall their own lives) and using her extraordinary memory to cheat during illegal card games. A murder in her apartment building reunites her with ex-boyfriend Lt. Al Burns (Dylan Walsh), who knows of her ability and enlists her help in solving the case. Burns is the head of a homicide unit that also includes right-hand man Det. Mike Costello (Michael Gaston), good-natured wise guy Det. Roe Saunders (Kevin Rankin) and street-smart Det. Nina Inara (Daya Vaidya). In episode 14/“Carrie’s Caller”, the team also acquires brash medical examiner Dr. Joanne Webster played by Saturday Night Live vet Jane Curtin. Carrie eventually joins Al’s team on a full-time basis, helping them solve murders while trying to unlock the mystery of her sister’s death. (Shades of Patrick Jane trying to catch Red John on The Mentalist.)

Actually, “helping them solve murders” is a bit modest because Carrie pretty much cracks every case by herself. (The other detectives are mostly there to do pesky leg work; the show makes it seem like a minor miracle that any murder in Queens got solved before she came aboard.) Based on the J. Robert Lennon short story, “The Rememberer” (I can see why they changed the title), the show was created by John Bellucci and Ed Redlich — who brought along his Without a Trace star Montgomery to this project — and the pilot was directed by Niels Arden Oplev (The Girl with the Dragon Tattoo). That first episode establishes the dramatization of Carrie’s hyperthymesia: the character literally steps outside herself as she revisits key moments in each case. It’s an effective trick that reflexively encourages the viewer to keep their eyes peeled for pertinent clues. Unfortunately, most of the clues end up being imperceptible to the viewer’s naked eye (like tiny writing in a newspaper article tacked onto a cork board), so it’s not really a fair fight.

The cases themselves are mostly standard procedural fare. Red herrings are explored until Carrie busts the real killers a few minutes before the end credits roll. (You half expect each bad guy to yell, “And I would’ve gotten away with it too, if it weren’t for that meddling redhead!”) It’s why my favorite episodes were the ones that deviated from the formula in some small way. (Admittedly, the formulaic, Ghost Hunters-inspired Ep. 11/“Spirited Away” was fun and introduced Britt Lower’s adorable tech-geek Tanya Sitkowsky.) Standouts included Ep. 17/“Blind Alleys” (guest star Clark Johnson takes a member of the team hostage after he believes his son was wrongfully killed), and the three-episode story involving a Saw-esque mastermind who drives others to kill while trying to form a bond with Carrie. (Eps. 14/“Carrie’s Caller”, 18/“The Comeback” and 21/“Endgame”.) “Endgame” also functions as the first half of the two-part finale, which concludes with Carrie coming face to face with her sister’s alleged murderer.

Montgomery is an appropriately forceful presence — her character “doesn’t do pantsuits” — who ably leads the ensemble, even though Carrie may not always be likable. The show also doesn’t shy away from the fact that Montgomery is a babe, having practically every male character hit on Carrie. Walsh’s performance as Al is as bluntly effective as his character. There’s not your typical “Will They or Won’t They” tension between Carrie and Al because “They Already Did”, and the two characters have a very familiar relationship. (I just wish the chemistry between the two actors was better.) Among the supporting cast, I enjoyed Rankin’s smart-mouthed performance as Roe the most, especially the gentle way he always teased Carrie. The addition of Curtin was also a shot in the arm for the series, while Marilu Henner (who has hyperthymesia in real life and serves as a consultant on the show) pops up in Ep. 9/“Golden Bird” as Carrie’s aunt.

Unforgettable averaged 12.1 million viewers during its first season. Those numbers would make it a runaway blockbuster on NBC, but they initially weren’t good enough to earn a renewal from CBS. The show isn’t as slick as the CSIs, it’s not as luridly violent as Criminal Minds and its hero isn’t as delightfully quirky as the one in Elementary. The low-key, jokey camaraderie among Al’s squad reminded me of a poor man’s version of Jethro Gibbs’ team on NCIS, though Unforgettable would need a few more years to develop that sort of a rapport among its characters and with viewers.

Unfortunately, it doesn’t look like they’ll get the chance to fully flesh out that chemistry. The 13-episode second season is set to debut July 28 with only Montgomery, Walsh and Curtin returning as series regulars. Even though I’ll miss some of the characters — well, mostly Roe — I’m interested to see what the re-tooled show looks like because, in an ocean of crime solvers, Unforgettable has a memorable hook.

The first season DVD set has all 22 episodes on six discs. It also includes commentaries on the season premiere and finale, deleted scenes, a gag reel, and featurettes on the cast, crew, production design and real-life rememberers.