Posted in: Disc Reviews by Jeremy Butler on July 2nd, 2013 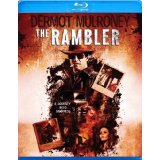 A fish has to swim, a bird has to fly, and a film has to entertain; those are the defining attributes for each of the  listed subjects, and in my opinion The Rambler didn’t meet its obligation as a film. The Dermot Mulroney-led film is a series of happenings, each of which are unconnected and wide open for interpretation, only tied together by one monosyllabic character. It seems that the story is whatever you want to make it, but therein lies the rub: many people don’t go to films that require them to form their own interpretation. They are looking to have a story told to them, not tell it to themselves.

The Rambler opens up with our titular character (Dermot Mulroney) observing a house on fire. Next it jumps to behind prison walls where The Rambler has ended up (whether it was due to the fire is not really explained). Through a quick montage sequence, we are given a recap of the character’s life on the inside up until he earns his release: smoking in his cell, smoking in the cafeteria, and smoking in the exercise yard.

Upon release, The Rambler attempts to acclimate back into his life before his prison stint; he moves back home into his trailer home with his wife Cheryl (Natasha Lyonne), and he resumes working at a local pawn shop. Within a few days of returning home, The Rambler receives a letter from his brother who owns a small horse ranch. In the letter, his brother invites him to come to the ranch and offers him a job training the horses. The Rambler sticks around town for another day, but after being thrown out by his wife and pissing off his boss, he decides to hit the road. Stealing whatever cash he can from the register as well as a guitar, The Rambler hitchhikes his way to his destination. Along his journey, he encounters dusty towns, strange people including a girl (Lindsay Pulsipher) who tends to continuously appear despite several different ominous circumstances that separate the two, and a device capable of recording dreams onto VHS.

On the back cover of the disc art there is a quote about the film from a Chase Whale that reads: “A movie that lives by its own rules.” To that I say, ain’t that the truth. I don’t want to be overly rude or disrespectful anyone’s craft, but I did not enjoy this film at all. I respect the film’s uniqueness, but I got nothing from this movie but a desire to have the time I wasted watching it back. When I watch a film, I try to imagine what the director is trying to convey and what the story is really about; I have never had a harder time with that question then I did with The Rambler. The story is an enigma; it gets points for being unpredictable, as I honestly could not anticipate what was going to happen from one moment to the next. The problem was that usually when something unpredictable happened, the peculiarity of the event always left me with a huge question mark.

Mulroney is an enigma himself; his character speaks as little as possible and tends to be completely unfazed by the strange events happening all around him. Whether it was his wife screaming that she is leaving him or watching someone’s head explode, his facial expression never changes, making his character mildly intriguing, but neither that nor his deadpan personality are enough to make the film a compelling story in my eyes.

The biggest peeve with the movie has to be all the questions it left me with. Who was Lindsay Pulsipher’s character, and what was she supposed to represent? What was the purpose of all the subliminal images intercut in certain scenes? How is possible for The Rambler character after all he saw to remain unaffected by it all? Were all his experiences some type of subconscious hallucination, or were they real? Leaving a film with more questions than answer generally doesn’t lead to a meaningful experience.

The Rambler is presented in an aspect ratio of 2.40:1. The 1080p image is arrived at with an AVC MPEG-4 codec at an average of 26 mbps. Filmed primarily in the Roswell, New Mexico, the film maintains an authentic desert feel combine with subliminal type images intercut into select scenes. As for picture quality, the film is very clear and detailed picture; the scenes that feature gore are the most detail as blood and tissue really pop during these scenes. Black levels for the film are good, and I really like the use of green for the streetlights towards the end of the film.

The Dolby TrueHD 5.1 audio mix works for the film but is not something to write home about. The actor’s speech is clear and discernible without the need of cranking the volume, but there’s no real immersive feeling. The musical score blends well with the film and may be one of the most impressive parts of the film, but a couple of the sound effects were too pronounced such as the bar door shutting or the ringing of the makeshift ring bell. There are also a fair number of awkward pauses where the characters are not speaking and the score isn’t going, so there is nothing to fill the space.

No Special Features were included on this disc, not even a commentary track which in my opinion would have been very helpful.

I don’t know what the director’s objective was for this film, but it’s pretty clear that whatever it was, I missed it completely. Though I enjoyed parts of the musical score, my overall opinion of the film is very low.

Jeremy Butler is a film school graduate of the International Academy of Design and Technology. He is been writing for Upcomingdiscs since 2012; however, movies have played a big part of his life for much longer. Favorite genres include horror, science fiction/fantasy, and comedy. Favorite movies are V for Vendetta, Boondocks Saints, Kiss Kiss Bang Bang, and The Godfather.
6 Souls (Blu-ray) CSI: NY – The Final Season