Posted in: No Huddle by Brent Lorentson on July 4th, 2013 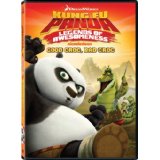 After having two successful films, Kung Fu Panda made its way onto the small screen as an animated show for Nickelodeon.  Though I wasn’t the biggest fan of the films, I could still appreciate the charm and allure of Po, the Dragon warrior who just so happens to be a Panda.  In the films Jack Black voiced the character of Po, and it’s his goofiness that seemed to make Po so likeable.  But on the small screen, the studios can throw down the healthy chunk of money that the A list actors take in when doing the voice work for the full-length films.  As luck would have it Mike Wingert would take over the voice work of the title character, and he does a remarkable job filling in.

For this DVD release we don’t get an entire season but only seven episodes that include some of Po’s most mischievous foes, the Croc bandits.  Helping me review this batch of awesomeness was my girlfriend’s six-year-old daughter Makayla.  She was a little reluctant at first considering she wasn’t too big a fan of the movies, but after the catchy opening credit music played, she was settled in and ready to watch.

Though the animation doesn’t come close to the quality we see in the big screen, the tales of Po and the Furious Five manage to make up for those shortcomings.  I’m not trying to say that this is the writing equivalent of a Tennessee Williams play, but for an animated cartoon it had its funny moments and did a good job presenting a good message along the way.  Since this is a kids’ program, good seems to always prevail and the bad characters or “mean” ones as Makayla would say — they seem to all get their comeuppance.

For me the show shone with the third episode Chain Reaction.  Seeing Po and Tygress chained together while trying to protect (and eventually recover) a precious jewel was just about the most fun I had with the show.  And I mean this in a good way; this is an episode that has fun playing with a common situation where we see two unlikely characters reluctantly stuck together.  To further compliment the episode, this also had some of the more creative fight sequences.

Another fun episode is Jailhouse Panda.  Here we get to see the writing team at work as they have fun with the notion of Po going into prison to discover the location of a weapon that one of Shifu’s enemies possesses that could destroy all of the Valley of Peace.  How Shifu’s plan unfolds behind bars to eventually the final conflict all comes together in a fun, clever way.

I wish more time was spent with some of the background mattes, where there was a chance to deliver some beautiful animation to deliver more depth; instead we get very simplistic settings that just don’t match up with the animated action.  Where the action animation factors in, that at least is impressive; after all, there is a lot of movement with several characters at one time, and it’s enough to appreciate the effort put in to every episode.  But the gem of the series I have to mention again is the opening credit music.  By the time the third episode was on, Makayla was doing somewhat of an excited dance and kung-fu routine to the music.

I don’t know how much more of a compliment I could give than when the DVD was over Makayla was ready to watch more.  The fact that this held her interest over all these episodes, and it left her anxiously wanting more of these awesome kung fu adventures, has me thinking this show is a success.  Is it my personal favorite animated series? Not so much, but I did enjoy this more than I had expected, and it did leave me wondering what other adventures are in store for Po and the Furious Five.

Brent Lorentson is a horror writer and film critic based out of Tampa, Florida. With a BA in Digital Film, he co-wrote and co-directed Scavenger Hunt. His short stories have appeared in various horror anthologies. In 2019 his short script Fertile Blood will be a part of the anthology horror film Slumber Party. He is currently working on his first novel A Dark and Secret Place set to be released in late 2019. Favorite Films: Taxi Driver, Fight Club, I Saw the Devil, The Wild Bunch, Dawn of the Dead, A Clockwork Orange, Pulp Fiction, Heathers, The Monster Squad, and High Fidelity.
Jethro Tull: Around the World Live How the West Was Won: The Complete First Season