How the West Was Won: The Complete First Season 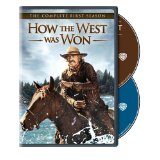 “The 1860s was a decade in which one of the most terrible civil wars in history was to begin and end. But far from the bloody fields of Gettysburg and Shiloh, changes — which were to alter forever the face of the American West — had already begun.”

And that pioneering spirit continued to capture the American public’s imagination 100 years later. The Western was the big boy on the block during the 1950s and ‘60s on both television — peaking in 1959, which saw 26 such shows air in prime time — and in the movies. How the West Was Won — starring John Wayne, Jimmy Stewart and Gregory Peck, among others — is one of the more enduring titles from that era.

“It’s been said that the West was won with guns and gold. It was not. It was won by the courage of simple people. Some were drawn by the lure of gold, but for the most part they were families moved by the dream of a new beginning. This story is about such a family.”

The 1962 film was loosely adapted into a 1977 miniseries and a 1978-79 regular series of the same name. (Both were preceded by a 1976 two-hour TV movie called The Macahans, which ended up functioning as a pilot for both shows.) Warner Bros. has just released the 1977 How the West Was Won miniseries as the show’s “Complete First Season” on DVD.

Arness (Gunsmoke), Saint (On the Waterfront) and Boxleitner (Tron) do most of the heavy lifting. Luke, forced into service during the Civil War by undermanned Union forces, is wanted for desertion after walking away from the conflict. Kate refuses to continue the journey to Oregon without her oldest son, so Zeb sets out to bring him back. During their travels, Luke saves and falls in love with a Simonite girl named Erika (Brit Lind) and considers adopting her non-violent way of life; elsewhere, Zeb meets up with an old friend who is wanted by the Army for scalping Indians. Meanwhile, Kate and her remaining children encounter a friendly stranger named Anderson (Don Murray) and have to deal with warring Indian tribes bringing their fight to the Macahans’ doorstep.

By the time How the West Was Won debuted in the late ‘70s, the traditional Western was all but gone from television. (There’s a reason Arness was able to take part in this project: the actor had finished his 20-year run on Gunsmoke one year before starring in The Macahans.) The show’s relatively straightforward subject matter and presentation may not have jibed with the era’s more daring work on television and (especially) in movies. But I happen to think there’s always a place for a good-ol’-fashioned yarn, and How the West Was Won certainly qualifies.

I was immediately impressed by the stunning panoramic shots of the American West that open each episode — I would’ve been much more impressed if we’d gotten them in dazzling HD, but that’s another complaint for another day — and the production values were strong throughout. The stories veer a bit into the melodramatic — particularly the romance between Luke and Erika, as well as the weird love triangle between Anderson, Kate, and Kate’s daughter Laura — but remain engaging. Though there are only three episodes, they each clock in at about 90 minutes, which gives the program the time and space to thoughtfully explore thorny issues.

Those issues include the complicated relationship between frontiersmen and Native Americans. When we first meet Zeb, he’s defying Army orders to massacre an Arapaho tribe that includes women and children. The show doesn’t sanctify Native Americans; instead it shows there were (gasp!) different groups, some of whom were more savage than others. The show also tackles the idea of justifiable violence. Kate is strongly against killing, while Luke is demonized by the Simonites despite the fact that he killed a man in self-defense. Kate is eventually forced to reevaluate her stance, while the well-meaning Luke seems to attract violence wherever he goes. Despite exploring these issues, there’s a decent amount of action in the show, including two solid cliffhangers in the first couple of episodes and a terrifically tense showdown between the Macahans and the relentless bounty hunter (played a great Anthony Zerbe) who is obsessed with catching Luke.

The acting is as square as Arness’s jaw, but nevertheless effective. The 6-foot-7 Arness brings the same towering presence to Zeb that he did to Marshal Matt Dillon. Here, however, he’s allowed to display more of a compassionate, folksy charm than his iconic “strong and silent” character. Boxletiner is more credible when he’s playing the romantic lead than when he has to convey Luke’s tortured past. Saint is a feisty presence, but mostly gets to shine in The Macahans, where we see her transition from a comfortable homebody in Virginia into a hardened frontierswoman.

Fortunately, Warner Bros. has included The Macahans TV movie as a special feature on this release. Although the 1861-set story predates the rest of the episodes on this set, it also works perfectly well if you want to watch it afterwards as a prequel. If you do that, you’ll recognize a lot of the “flashback” footage from the 1977 miniseries. The Macahans follows the family as they leave Virginia for Oregon, and does a good job of establishing the similarities between Zeb and Seth. (For some reason, both boys names were changed between the TV movie and the 1977 miniseries: Seth became Luke, and Jed became Josh.)

Westerns may have fallen out of favor in Hollywood and How the West Was Won absolutely represents an old-fashioned form of entertainment. Thankfully, an entertaining yarn never really goes out of style.