Jethro Tull: Around the World Live 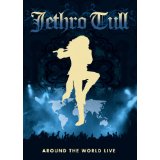 That has certainly been true for the iconic British invasion band, Jethro Tull. Their first album came out in 1968, and they made their maiden tour of The United States the next year as the opening act for Led Zeppelin. From that point on the band has experienced both ups and downs, to be sure. Still, they continue to play nearly 100 shows a year throughout the world. Jethro Tull: Around The World offers a peek at their traveling minstrel show over the span of 35 years from 1970 to 2005. It’s a rare glimpse into the evolution and, indeed, the aging of a rock classic. One might say that it’s about time.

“He sees his children jumping off at the stations — one by one.”

One of the first things you’ll notice over these years is that the band has changed lineup faster than an American sports team. There have been roughly 25 members of Jethro Tull since its inception. Only lead guitarist Martin Barre has remained with front-man Ian Anderson throughout the band’s nearly 40-year history. Still, continuity remains, because it is Anderson we come to see or buy the recordings to hear. His unique songwriting style has often been referred to as a kind of urban poetry. The lyrics are often bizarre and rather twisted. His imagery is strong. We all know what Aqualung looks like. His description isn’t pretty at all, but we’d recognize the man anywhere.

“God stole the handle and the train won’t stop going — No way to slow down.”

Still, it’s more than just his distinctive voice and songwriting that sets Ian Anderson apart from others and makes him very much the identity of Jethro Tull. He also happens to be known as the one-legged flute player. Flute are not exactly a staple in rock bands. The Moody Blues are pretty much the only other huge act in the genre that carries a flute player. Anderson wields his flute more as a weapon than an instrument. He assails our senses with a style that actually evolved from learning the instrument incorrectly. He once thought you had to make sounds as you blew much like a kazoo. Of course, he knows better now but wouldn’t dare change a thing. Anderson also has a flair for other acoustic instruments. He plays mandolin, harmonica, and acoustic guitar. He’s the traditional acoustic balance to the band’s rather edgy rock sounds. It’s a balance that has been working for years and doesn’t appear to be slowing down.

“It’s a wide world out there, so much wider than imagined. I can’t quite put my finger on the pulse.”

The collection contains four DVD discs in a nice full-color booklet that provides plenty of pictures and anecdotes from and about the band. It’s a wonderful companion to the history that unfolds on your monitor. It’s important to note that some of this footage is quite bad. The Tampa show was actually a bootleg made by a former crewmember that had been making the rounds and which Anderson managed to track down and get under his control. Tull was one of the first bands to use huge television screens to allow the audience to see the nuances of band close-ups. It was this camera work that was copied by the infamous crew member and is included here, mostly for perspective. Most shows have the choice of a Dolby Digital stereo track or twin DTS 5.1 or Dolby Digital 5.1 tracks. Again, the quality varies depending on the age and venue.

“The minstrel in the gallery looked down on the Rabbit-run. And threw away his looking-glass – saw his face in
Everyone.”

Isle Of Wight, England 1970: There are only two songs here and it is expectantly the roughest of the footage.

Tampa, Florida 1976: This is the “stolen footage” concert. It doesn’t show the audience at any time. The lights create a black framework around the performers, and the result is strictly close-ups of one or two performers at a time. Anderson is manic here. His wild-eyed and crazy stares remind me of seeing Ray Cooper perform with Elton John once.

Too Old To Rock ‘N’ Roll, Too Young To Die

Minstrel In The Gallery

Munich, Germany 1980: The video here is okay, but the audio is the worst of the lot. You can’t hear lyrics much of the time. You have to count on knowing these things by heart.

Too Old To Rock ‘N’ Roll, Too Young To Die

Minstrel In The Gallery

Dortmund, Germany 1982: This is another two-song performance.

Santiago, Chile 1996: Here we have the largest gap in Tull history. There hadn’t been a new album for quite a while until Roots To Branches was released that year. Quality also makes a marked improvement here, and Anderson begins to show his age in appearance. Still, he has the energy to move around the stage while finding the wind to drive his flute.

In The Grip Of Stronger Stuff

In The Money Lender’s Temple

Hilversum, Holland 1999: This is the best audio and video quality because it’s the band in a television studio complete with an interview. It’s the first widescreen concert here and is a rather nice change of pace from the concert tour footage.

Someday The Sun Won’t Shine For You

The Secret Language Of Birds

In The Grip Of Stronger Stuff

London, England 2001: Another two-song interlude. This one is over-stylized with plenty of visual tricks in the image. My least favorite segment.

Montreux, Switzerland 2003: You can tell the band is having a better than usual time here.

Some Day The Sun Won’t Shine For You

Life Is A Long Song

Living In The Past

Lugano, Switzerland 2005: Of course, the most recent and complete concert is one of the best on the set.

For A Thousand Mothers

Jack In The Green

Serenade To A Cuckoo

Farm On The Freeway

The set is a treasure for fans but isn’t going to be embraced by the casual Tull fans. My greatest complaint is the repetition while leaving many classic songs out of the collection completely. I understand selection is always a tricky thing. One man’s favorite is another man’s least favorite. You won’t find such classics as Bungle In The Jungle, Rocks On The Road or Doctor To My Disease in the collection. I’m sure that they could have been included instead of the several versions of other songs. There is some stuff here that you won’t find anywhere else. Perhaps four discs just wasn’t enough.

I saw Tull for my birthday several years ago here in Tampa. Anderson still has an amazing amount of energy, and he made me tired just looking at him. He does tend to offer the rest of us some inspiration, however. “No, you’re never too old to Rock’n’Roll if you’re too young to die.”

Gino Sassani is a member of the Southeastern Film Critic's Association (SEFCA). He is a film and television critic based in Tampa, Florida. He's also the Senior Editor here at Upcomingdiscs. Gino started reviewing films in the early 1990's as a segment of his local television show Focus. He's an award-winning recording artist for Omega Records. Gino is currently working on his 8th album Merchants & Mercenaries. Gino took over Upcomingdiscs Dec 1, 2008. He works out of a home theater he calls The Reel World. Favorite films: The Godfather, The Godfather Part II, The Body Snatcher (Val Lewton film with Karloff and Lugosi, not the pod people film), Unforgiven, Gladiator, The Lion King, Jaws, Son Of Frankenstein, The Good, The Bad And The Ugly, and Monsters, Inc.
Least Among Saints Kung Fu Panda: Legends of Awesomeness – Good Croc, Bad Croc