Posted in: No Huddle by Jonathan Foster on July 4th, 2013 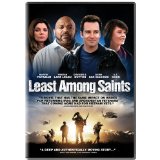 How do you cope with loss? Do you numb yourself so you don’t feel anything? Or do you lash out in anger, making everyone else feel as bad as you? Do you do seek help or do something drastic? Least Among Saints explores that concept, looking at the various types of loss and hurt from different perspectives and age demographics while exploring the way to redemption.

Anthony (Martin Papazian, TV’s 24, and also this film’s writer and director) is an Iraq War veteran whose return to civilian life has not been easy. Suffering from Post Traumatic Stress Disorder, Anthony drinks to forget the horrors of war and the fact that his ex-wife has a restraining order against him. After a particularly bad day, he decides to end it all. His suicide is interrupted by the frantic cries for help from his 10-year-old neighbor, Wade (Tristan Lake Leabu, Superman Returns), whose mother has overdosed on drugs. Anthony rushes Wade and his mom to the hospital, where she dies shortly after. Realizing Wade has no one and nowhere to go, Anthony convinces Wade’s social worker, Jolene (Laura San Giacomo, TV’s Just Shoot Me!), to let Wade stay with him, against her better judgment. Back at Anthony’s, Wade shows Anthony a postcard from his father and tells him that he wants to find him. Even though Anthony doubts they’ll find him, he agrees. The two set off on a road trip, defying Jolene’s explicit instructions. As they grow closer, Anthony realizes he must overcome his demons if he is to be the father figure Wade needs.

On the surface, this appears to be you typical Hallmark feel-good movie of the week and, for the most part, it is. The story has the usual trials and misunderstandings that one would expect from a broken man trying to connect with a lonely boy and the somewhat predictably warm, fuzzy ending. Despite that, any story about two broken people helping each other become whole and find peace resonates with the human soul. Something about redemption speaks to us, and it works well for this film. Even though I pretty much knew what would happen, I found myself grinning like a fool when the end came and the credits rolled.

While the story wasn’t exactly groundbreaking, the acting in this film really impressed me. Papazian and Leabu have a great on-screen chemistry together throughout the film and play off each other’s emotions really well. The scene where Anthony teaches Wade to stand up to the school bully is equal parts funny and heartwarming. These two also act well on their own, with Anthony’s verbal judo with his ex-wife and Wade’s reaction to seeing his mom in a hospital bed being especially great scenes. San Giacomo does a solid job as social worker Jolene. She plays her with a quiet strength and exasperation (mostly at Anthony), and shows some heart beneath her tough, jaded exterior. The quality of acting really surprised me and was a welcome sight in this film.

I really enjoyed the way Papazian weaved PTSD into his film. Not only did it give the story some much-needed “oomph”, it also highlighted a serious medical condition that few people understand unless they’ve been affected by it. The way Anthony is treated (usually with pity or ridicule) and his own beliefs about himself really help flesh out the character. His PTSD — and the story behind it — develops into its own semi-subplot. I wish it had been fleshed out a little bit more. Intentionally or not, Papazian makes a powerful statement in his film about PTSD.

As far as films go, Least Among Saints is definitely not the greatest, but it is a solid film. I recommend renting it for a feel-good movie night.

Unforgettable: The First Season Jethro Tull: Around the World Live