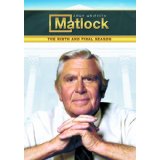 It’s time to say goodnight and goodbye to that lovable country lawyer Ben Matlock. Andy Griffith managed to bring a new style and even comfort to the lawyer show when he first walked into a television courtroom as Matlock. That was March of 1986. After 182 cases and a handful of television daughters, the show came to a close in May of 1995. We lost Andy a year ago almost to the day of when the final season of Matlock hits the shelves. It might not be the show he will forever be remembered for. But it does hold its own in the life of a special entertainer. Now you can complete that collection.

Matlock began life as a television movie from Dean Hargrove, who brought us Columbo. Hargrove would later work the same magic with Dick Van Dyke in Diagnosis Murder. In fact, the two shows could easily have been companion pieces. Both featured sit-com stars from the 1950’s and 60’s who had become somewhat iconic characters. Both would don the role of professionals. Both shows would subscribe to the “formula” mode of storytelling. Diary Of A Perfect Murder would set up the Matlock formula. It’s simple, really. Matlock was a lawyer in Atlanta. Some wronged defendant, usually charged with murder, would show up asking for Matlock’s help. Matlock and his team would investigate the crime with an eye toward, as OJ Simpson is fond of saying, finding the real killer. In the pilot the Matlock character was less Andy Taylor and a little more slick at first. I’m sure that while it was intended to show Matlock’s prowess as a high-priced attorney, somewhere along the line it became obvious that the show’s finest asset was Griffith himself and that southern charm he was already famous for. Whatever the reason, you can see the character soften significantly during the early episodes of the season. And that decision was a smart one, as Matlock would continue for nearly a decade.

The final season saw the team consist of Jerri Stone, a lawyer in Ben’s office played by Carol Huston, and Cliff Lewis, his investigator played by Daniel Roebuck.

The final season of Matlock brought more of the same. If you’re a fan, that’s very good news indeed. What is that, you ask? Imagine Sheriff Andy Taylor older and now an attorney, and you pretty much have the setup for Matlock. Forget for a second that both characters were played by Andy Griffith. That’s not all they have in common. Matlock is every bit the “southern gentleman” that Taylor was. He might be a little smarter, but he walks and talks like Andy Taylor. Law graduate Cliff Lewis, played by Daniel Roebuck, also joins the firm as a new lawyer.

So what is old Ben Matlock up to in his final year? There are several more two-part episodes this season. These two-parters include the season premier The Accused. A journalist is charged with killing a huge mob figure. Matlock must defend her not only against the legal system but a mob family out for revenge. His job isn’t made any easier when the reporter is trying to cover up her own embarrassment. In The Heist Matlock is trying to relax at the beach to watch a friend compete in a triathlon. Of course, there’s murder afoot when he runs into an old FBI buddy hot on an old case. Appropriately, the series ends on a two-parter called The Scam. Matlock ends up in sunny Florida trying to lose weight and find a killer.

But there are plenty of good single-episode stories. The Dare is perhaps one of Griffith’s finest acting moments. A rich guy dares Matlock to solve the “perfect” murder by killing his friend and then framing another guy for the deed. It’s very personal for an enraged Ben Matlock. Jerri goes undercover at a dating service when Matlock suspects there are fatal consequences for a previous client in The Dating Game. Julie Sommers, playing A.D.A. Julie March, returns in The Confession. She wants Matlock to clear a con she convicted once she learns that her snitch lied. It’s a nice reunion that fans of the show will certainly appreciate. Jerri’s sister is in town and accused of killing a negligent doctor in The Deadly Dose. In The Target Matlock misses a boat because he gets seasick. It explodes killing a judge, but Ben worries that he was the target of the hit. The only way to get to the truth is to defend the guy accused of the murder.

The show really never varied from year to year in the kind of stories that were told. There was considerable cast turnover, and only Ben Matlock would remain as a character through the show’s entire run. No other actor/character would come close. The revolving door finally ended and here’s your chance to complete the collection in your own library. “Looks like a job well done from here, doesn’t it?”

Gino Sassani is a member of the Southeastern Film Critic's Association (SEFCA). He is a film and television critic based in Tampa, Florida. He's also the Senior Editor here at Upcomingdiscs. Gino started reviewing films in the early 1990's as a segment of his local television show Focus. He's an award-winning recording artist for Omega Records. Gino is currently working on his 8th album Merchants & Mercenaries. Gino took over Upcomingdiscs Dec 1, 2008. He works out of a home theater he calls The Reel World. Favorite films: The Godfather, The Godfather Part II, The Body Snatcher (Val Lewton film with Karloff and Lugosi, not the pod people film), Unforgiven, Gladiator, The Lion King, Jaws, Son Of Frankenstein, The Good, The Bad And The Ugly, and Monsters, Inc.
Ben 10 Omniverse – Heroes Rise 2 Pacific Rim