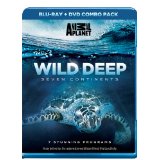 “The Earth. A world of water. Nearly three-quarters of our planet is covered in a massive blue patchwork of seas and oceans. What lies beneath the surface is an alien realm we’ve barely begun to explore. Within these depths mysterious and amazing life forms live in a beautiful but fragile world of immeasurable variety and environmental extremes. This is a journey into the Wild Deep.”

Wild Deep is a seven-part nature series that takes us on a journey to the underwater worlds of each of the Earth’s continents. While there is some coverage of the lands themselves, the focus here is what happens beneath the surface of those lands’ oceans. The show ran on Animal Planet starting in January of 2013.

The release contains six episodes that run about 20 minutes each. There is a seventh “bonus” episode which runs twice as long. I suppose the episode might be marked “bonus” because of the length and the fact it appears to have not been a part of the show’s original television run. The narrator is different and the episode has a more decidedly British production design. Still, this would not exactly be the Seven Continents without it.

The short length of each episode makes these journeys feel a tad rushed. The narrator often talks as if he were at an auction, and there is little time to linger on any of the spectacular animals or images presented here. The result is more like an ocean “greatest hits” show. Certainly the photography here is up to par with any of the recent marine documentaries I’ve seen; however, the short format takes us through at a pace that allows little time to truly appreciate it.

The Coral Triangle: This episode explores the islands of the Philippines. Here you’ll find the second-largest coral reef on the planet, second only to the Great Barrier Reef in Australia. The reef is teeming with a huge diversity of life. There are sea turtles, thresher sharks, barracudas, and, would you believe, an animal called the sexy shrimp because of the way it shakes its tail.

Oceania: This piece covers the South Pacific. The areas explored include New Guinea and Australia. Here you’ll find a shark sanctuary where the animals are protected and thrive in great numbers. There are huge sponges that are as old as 2000 years.

Africa‘s Oceans: More coral reefs teeming with much the same kinds of plants and animals. This one stays above the surface a little longer and reveals black-footed penguins from Africa’s southern tip. There you will also find plenty of seals and the giant sharks that come to feed on them.

The Azores: This is basically an underwater mountain range. The islands are basically the peaks of some of these mountains. Moby Dick himself makes an appearance here. While there weren’t any white ones, there are sperm whales to be seen here. There are also red starfish and devil rays swimming about. There are quite a few marine mammals to be observed here including dolphins and humpback and pilot whales.

Galapagos: Of course the unique marine iguana and giant tortoises are the main attractions ,even if they are above the ocean for the most part. Still, there are Galapagos sharks, sea lions, and huge manta rays to see here, as well.

Mexico‘s Mysterious Waters: The first half of this piece covers the Mayan civilization and the history and ruins of the area. Once we do get into the water there are sleeping white-tipped sharks and manta rays that attract divers. It appears these rays actually look forward to the interactions and stick around as long as the divers do.

Antarctica: This double-sized episode plays out with the more leisurely pace and detail of a more typical ocean documentary. Of course, ice plays a big part of the environment, and we visit large sheets of moving ice and icebergs.

Each episode is presented in its original aspect ratio of 1.78:1. The 1080p image is arrived at with an AVC MPEG-4 codec. This is a rather colorful presentation. High definition has been a huge boon to these kinds of documentaries. You won’t be disappointed in the colors displayed here. The image is sharp. Any visibility issues are pretty much due to the quality of the water itself. That is almost never an issue, and you’ll get a crystal clear window throughout.

The DTS-HD Master Audio 2.0 is pretty much for the narration. The music is a bit too intense. There is this disaster movie quality to the theme that gets annoying pretty quickly. Even the more appropriate music during the episodes is mixed a bit too loudly at times.

We haven’t actually gotten to review very much from Animal Planet over the years. Most of the documentaries I’ve seen come from A&E or the BBC. This one stands up to those in most aspects. I think my only real complaint is that 20 minutes just isn’t enough time to take these journeys. I feel as if I’m on one of those guided vacation tours that herd you in and out of museums and other attractions on a strict timetable. Perhaps this is just a small taste of “the last frontier that is just waiting to be explored”.

Gino Sassani is a member of the Southeastern Film Critic's Association (SEFCA). He is a film and television critic based in Tampa, Florida. He's also the Senior Editor here at Upcomingdiscs. Gino started reviewing films in the early 1990's as a segment of his local television show Focus. He's an award-winning recording artist for Omega Records. Gino is currently working on his 8th album Merchants & Mercenaries. Gino took over Upcomingdiscs Dec 1, 2008. He works out of a home theater he calls The Reel World. Favorite films: The Godfather, The Godfather Part II, The Body Snatcher (Val Lewton film with Karloff and Lugosi, not the pod people film), Unforgiven, Gladiator, The Lion King, Jaws, Son Of Frankenstein, The Good, The Bad And The Ugly, and Monsters, Inc.
Damages: The Complete Fifth and Final Season Skull World: Warrior Edition