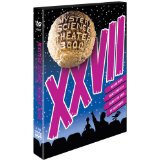 Mystery Science Theatre is an acquired taste. For me, I’ve really got to be in that certain mood to watch it. That’s the beauty of these DVDs. You pop them in when you’re ready. The idea is pretty whacked. Depending on the season you’ve got, Joel or Mike is trapped in space on the “Satellite of Love”. Doomed to spend his life watching very bad films, our hero makes the best of a bad situation. He uses his resources to construct a few robot pals. There’s Crow T. Robot (Beaulieu), Tom Servo (Murphy), and Gypsy (Mallon). Part of an experiment together, they watch the films from the front row, constantly ranting throughout. If you’re like me, you’ve invited a few friends over to watch a schlock festival. The movies weren’t as important as the banter you created while watching. That’s exactly what you see here. The silhouettes of our host and his robots dominate the lower portion of the screen, where they provide alternative dialog and sometimes witty commentary on the action. The two evil station owners/mad scientists send them a new bad film each week to observe their reactions to the bombs. The films are broken up by off-the-wall skits and fake commercials to alleviate the tedium.

Once again there are four movies/episodes included with the collection. You get the cool mini-lobby cards and the breakdown is 2 Mike and 2 Joel episodes.

The Deadly Mantis: The sci-fi classic schlock-fest was also known as The Incredible Preying Mantis. An explosion on the opposite part of the world releases a prehistoric mantis from the Arctic ice. It makes its way south to New York where there’s a final confrontation in the Lincoln Tunnel. The film features a bit of a love triangle between news photographer Marge (Talton) and Col Joe Parkman (Stevens) and Professor Ned Jackson (Hopper). The film is famous for the sheer amount of stock footage used. I don’t know if it’s a record, but about 60% of the film is stock footage. It plays out like a documentary on our Radar Defense System before the emergence of the creature. The f/x weren’t bad for the time, and the showdown in the tunnel has become a bit of a classic scene, often reproduced in other films.

The episode also features Crow trying to institute a casual business day. The Apes repair the Alpha-Omega bomb and end up destroying the Earth.

Extras on the disc include an introduction by Mary Joe Pehl and a documentary on William Alland.

Village Of The Giants: This Bert I. Gordon film is a very loose adaptation of the HG Wells story Food Of The Gods. What it really is I’m not quite so sure. A group of teens led by Beau Bridges crash their car near a small town where boy genius Ron Howard, yes, that Ron Howard, has accidentally invented a goo that makes things grow huge when eaten. After a little fun with a couple of animals the teens eat the goo and try and take over the town once they are giants.

This is probably one of the worst films ever done on the show. The f/x are pretty bad and the teens stoop to some bad dancing and beach party dialog. It wasn’t much of a stretch to riff on this one. It does a pretty good job on its own. The film is more risqué than previous episodes. The film includes a woman’s bust expanding to pop her buttons as she grows and a normal-sized guy taking a ride on another girl’s enormous breasts. While there’s no actual nudity, of course, it’s pretty out there.

Skits include the guys performing their annual 30 minute workout and TV’s Frank getting fired to cut costs. Of course he tries to sabotage his replacement.

Rocket Attack USA: This one is 100% Cold War propaganda. It turns out that the Russians were using Sputnik as a way to spy on America and work out a nuclear attack on New York. A couple of spies are sent to the Soviet Union to try to stop the plan, but it doesn’t really work out for anyone in the end.

The invention exchange nets an adding machine that prints candy so you can “eat your losses” and a conversion of a Foosball table to water polo complete with shark attacks.

The episode includes a chapter of The Phantom Creeps with Bela Lugosi.

The Slime People: Underground slime people have created a dome of solid gas that isolates L.A. from the rest of the world. Inside they are changing the environment so they can thrive. You can guess that it’s bad for the people stuck inside the dome. The rubber suits are enough in themselves to deserve serious riffing.

The gang has tried to copy their own success, but they’ve never been able to quite catch this lightning in a bottle again. Where can you find great, OK, badly great, schlock and some wise-acre robots to riff on them? “I’ve narrowed the field to one.”

Gino Sassani is a member of the Southeastern Film Critic's Association (SEFCA). He is a film and television critic based in Tampa, Florida. He's also the Senior Editor here at Upcomingdiscs. Gino started reviewing films in the early 1990's as a segment of his local television show Focus. He's an award-winning recording artist for Omega Records. Gino is currently working on his 8th album Merchants & Mercenaries. Gino took over Upcomingdiscs Dec 1, 2008. He works out of a home theater he calls The Reel World. Favorite films: The Godfather, The Godfather Part II, The Body Snatcher (Val Lewton film with Karloff and Lugosi, not the pod people film), Unforgiven, Gladiator, The Lion King, Jaws, Son Of Frankenstein, The Good, The Bad And The Ugly, and Monsters, Inc.
The Demented (Blu-ray) G.I. Joe: Retaliation (Blu-ray 3D)