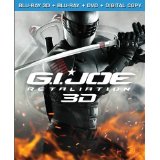 I was not looking forward to this sequel at all. Now, to those who saw the film in theaters and loved it, before you get bent out of shape, allow me to explain why. See, I don’t react to change very well, and after seeing the first film and liking it, let’s just say that I had certain reservations after learning that much of the original cast wouldn’t be returning (not to mention news of the worst kept secret about the demise of one of the characters). Needless to say when I sat down to watch Retaliation, I wasn’t expecting to enjoy. Happy to say that after watching it, I’m eating crow.

Retaliation resumes sometime after the original movie. Duke (Channing Tatum) is now leader of his own team which includes Roadblock (Dwayne Johnson), Lady Jaye (Adrianne Palicki), Snake Eyes (Ray Park), and Flint (DJ Cotrona). After completing a successful mission, the team returns to base camp and awaits extraction. Dropping their guard, the group enjoys downtime; however, when a security patrol arrives ahead of schedule, it does not go unnoticed.  Their suspicions are proven right, as a massive assault devastates the camp. Unable to adequately defend themselves, the team suffers heavy casualties including a vital and precious member of the team. (I’m sure you’ll have no trouble figuring out who.)

The only survivors of the attack, the remaining team members quickly put it together that only one person could have authorized the attack: the very man that they take their orders from, the President of the United States. Unbeknownst to them, the President is not who they think he is. He has been captured and replaced by COBRA chameleon Zartan who has undergone revolutionary surgery to become the President’s double. Slandering the Joes in the media with claims of unsanctioned missions, the President (Zartan) puts COBRA in their place, giving them immeasurable power.

After being labeled a renegade outfit in the media, the Joes vow to prove their innocence and get vengeance for their fallen comrades. Outmanned and outgunned, the Joes are in need of backup and set out to D.C. to seek the aid of the only man they believe can help clear their name and restore order: General Joseph Colton (Bruce Willis), the man they are named after.

As I mentioned ahead, I had some reservations about the film when it was first announced, and truth be told, watching the trailers for the film wasn’t a big help either. That being said, the film was actually better than the original in my opinion. In the original, there was a bit of a farfetched streak in regard to some of the technology that was introduced: accelerator suits, camouflage attire, and foreign language voice-activated jets; it was bit much. In Retaliation, the technology is advanced, but it’s much easier to digest.

Another one of my reservations was the addition of Bruce Willis; I love Willis as much as the next guy, but I’m just overwhelmed by how much of him I’ve been seeing lately. Fortunately the story is not strictly centered around him; it’s actually The Rock’s show.  Yes sir, there is no question that Dwayne Johnson is the lead character of the movie, and with good reason. As expected Ray Park contributes his vast experience with martial arts fight scenes; however, it was the final fight scene between Roadblock and Firefly that proved to be the best scene.

There is a competing storyline involving Snake Eyes and Storm Shadow which eventually ties into the principal storyline; however in my opinion the overall story could have done without it. I’m not suggesting the removal of Snake Eyes or Storm Shadow, just suggesting that they should have been tied into the central story instead. This storyline is geared to allow redemption for a character that should not be redeemed.

G.I. Joe Retaliation is presented in its original aspect ratio of 2.35:1. The 1080p image is arrived at with an AVC MPEG-4 codec at an average 35 mbps. The 3D disc has a nice dual MVC codec at averages of 30/12 mbps. The film certainly has some grand moments, and this 3D high-definition image presentation delivers. The 3D is used to good immersive effect. That doesn’t mean there aren’t things flying at you. There is plenty of shrapnel, blades and bullets to dodge throughout. The 3D does manage to bring you into this unique world. Nowhere is that more evident than the cliff-dance fight between Snake Eyes and Storm Shadow. The vista is absolutely breathtaking, and the characters swing in and out of our field of vision providing impressive depth perception. Of course, much of the film looks very much like a video game, and that’s really pretty much the style of the action. It’s obvious when some of these swinging characters are computer-generated. The film is sharp, and textures allow you to feel such things as the costumes and rugged ground. Black levels are superior and offer you the kind of shadow definition that allows you to appreciate and distinguish between the various items on the screen.

The DTS-HD Master Audio 7.1 is often alive with explosions and gunfire. The surrounds are as aggressive as it gets. You’ll find action going on all around you, and the overwhelming effect only helps immerse you that much more into the action. Dialog comes through clearly. The subs never get much time to rest. If you have your settings correct, you will feel this film as much as see or hear it. It’s a show-off piece, to be sure.

Deleted Scenes: A total of brief scenes, all of which with a runtime a minute or less. The first two scenes removal are of no consequence to the film, however the last scene entitled “Arlington” would have made a nice addition to the film.

Audio Commentary: Director Jon Chu and Producer Lorenzo Di Bonaventura take time out of their busy schedules to talk about their favorite scenes, what it took to film the action scenes, and discussing the easy banter that existed between Tatum and Johnson.

Retaliation is a welcome and worthy addition to the franchise. Action-packed, comedic at the right times, and preaching the brotherhood strictly found among those who serve together, it escapes the sequel curse by managing to outdo its predecessor and paves the way for the third incarnation which is currently in the beginning stages.

Jeremy Butler is a film school graduate of the International Academy of Design and Technology. He is been writing for Upcomingdiscs since 2012; however, movies have played a big part of his life for much longer. Favorite genres include horror, science fiction/fantasy, and comedy. Favorite movies are V for Vendetta, Boondocks Saints, Kiss Kiss Bang Bang, and The Godfather.
Mystery Science Theater 3000: XXVII Love Me Tender (Blu-ray)