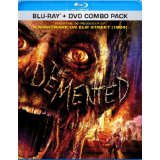 I don’t care if it makes me sound like an awful human being, but I wanted The Demented to be much nastier than it actually was. The packaging for this straight-to-Blu-ray offering trumpets the fact that it’s “from a co-producer of A Nightmare on Elm Street” and producer Steven Monroe, who directed the I Spit on Your Grave remake. Since I’m not delusional, I didn’t expect this film to be nearly as good as a horror classic like Elm Street. But I also didn’t think it was unreasonable to expect the competent thrills of the Spit remake. Instead, the filmmakers have given us a sub-SyFy gloss on 28 Days Later… and dozens of other (infinitely superior) horror movies.

If you’ve ever seen a horror flick, you know this story. Six young, pretty things — who happen to be conveniently paired off — convene at a remote location for some party time, but end up fighting for their lives. In this case, we have college friends hanging out and hooking up at a rich friend’s Louisiana estate. A rogue terrorist attack on the Gulf Coast unleashes a biological weapon that turns the infected into rabid and fast-moving killers. (Horror fans who passionately hate the idea of “fast zombies” just clicked away from this page.) How do we know a rogue terrorist attack occurred on the Gulf Coast? Glad you asked: the father of one of the characters calls the house where they’re staying and hilariously literally says, “there’s been a rogue terrorist attack on the Gulf Coast.”

For a while, I toyed with the idea that this movie was terrible on purpose. Besides incredibly timely radio transmissions and the film’s eye roll-inducing final scene, the movie only has six speaking parts. But the characters are so generic they might as well be called Dead Meat #1-6. Okay, fine…they have names. Dead Meat 1 & 2 David (Richard Kohnke) and Taylor (Kayla Ewell) open the film with a scene so hokey — David gives Taylor a promise ring — that I was convinced it had to be a spoof. David and Taylor are joined by college football star Brice (Ashlee Brian) and his girlfriend Naomi (Brittney Alger). The festivities — which included a slightly prolonged Slip ‘n Slide montage — are hosted by rich kid Howard (Michael Welch) and his girlfriend Sharley (I Spit on Your Grave leading lady Sarah Butler). Unfortunately, as the rest of the movie played out, it became clear that the staggeringly bad acting and writing were not intentional.

Sure, that results in some solid unintentional comedy. (I laughed out loud at the moment where the group was trying to decide on a course of action, and Taylor abstained because she didn’t “have enough data to make this decision.”) The howlers don’t stop there. First-time writer/director Christopher Roosevelt clumsily telegraphs every single plot point and seems completely unfamiliar with the basic notion of “show, don’t tell.” As a result, we have moments like one character conspicuously noting that there’s no cell phone reception in the estate (hmm, I wonder if that’ll come back to haunt them) and two characters having a disagreement that’s supposed to explain why one leaves the other to die later on. Oh and just in case you weren’t clear on how things work in this movie, David flatly states, “so if we get attacked by an infected person or animal, we can become infected.” Thanks for clearing that up, pal!

Obviously, no one watches horror movies — especially low-budget, straight-to-home-video horror movies — for a master class in acting or writing. (For what it’s worth, I did enjoy Welch’s “James Spader-in-the-‘80s preppy/jerk” work…so naturally, the movie makes sure Howard’s not around quite as long as everyone else.) The problem is The Demented also features horrendous pacing and editing. Aspiring NFL star Brice decides, out of nowhere, to use a baseball bat against a rabid dog hanging around the estate. (I guess his NFL role model is Michael Vick.) Much more importantly, every scene where the zombies and humans attack each other is unbelievably choppy. I can understand the filmmaking crew not having access to top-notch creature effects, but there are much better ways of covering that up than fast, sloppy cuts.

So what’s stopping me from giving this film a completely failing grade? Well other than its solid potential as a Mystery Science Theater 3000-type laugher, the film featured a few decent practical stunts, and I liked the urgency of the foot chases. I also enjoyed the eerie visual of a horde of perfectly frozen zombies, forcing our heroes(?) to silently sneak around them. Naturally, the movie ends up overdoing it with these “be vewy, vewy quiet” moments.

The Demented is presented in an aspect ratio of 1.78:1. The 1080p image is arrived at with an AVC MPEG-4 codec at an average of 26 mbps. At least the film makes a strong first impression: the opening images of the Louisiana bayou — The Demented was filmed and is set in Baton Rouge — are remarkably sharp and textured. They’re the best looking thing in the film. Unfortunately, it’s all downhill from there. The darkened indoors scenes (of which there are many) feature a disappointing softness and some banding. Black levels during the early scenes at the estate are strong, but noticeably fall off when the action changes location for the film’s final act. Color and contrast are adequate but nothing to write home about. As far as the cheap-o visual effects, the frantic editing never really gives us a great look at the infected, though we do get an effectively gross look at an injured knee. And let’s just say the CGI terrorist missile strike sounded much better than it looked. Speaking of which…

The Dolby TrueHD 5.1 track is as aggressive as you might expect from a dunderheaded horror film. It’s not as nuanced as something you would get from a more polished film (and filmmaker), but it’s still bluntly effective. Subs rumble to life during jump scares and the missile strike. Immersion isn’t really a factor — a missed opportunity considering the human characters are almost always surrounded by monsters in the distance — but there are a few instances of solid directionality. (Especially during scenes in a car, including sound traveling from the front to the left rear speaker when a zombie gets run over by an SUV.) Of course, the track truly comes alive during the intense action sequences, featuring lots of growling that isn’t always in synch with what’s happening on screen, and an unusually high number of people crashing through windows.

When I sit down to watch a schlocky horror movie, I want to see some satisfying, cringe-inducing kills and thrills. (And if you want to toss a bit of gratuitous T&A away, I won’t be mad.) The Demented delivers none of this. In fact, the filmmakers seemed to be making a concerted effort to bring a fresh spin to a hopelessly unoriginal situation. So we actually see the weary survivors try to formulate a reasonable plan of escape, even if it doesn’t exactly make for gripping cinema. The problem is that both the writing and acting in this film aren’t good enough to support these semi-lofty ambitions.

I don’t think I need to say it, but I recommend you skip this one. I’m actually a bit disappointed there are no special features. I wanted to listen to the cast and crew discuss this film just to see if they have any idea how bad it is.