Posted in: Disc Reviews by William O'Donnell on August 2nd, 2013 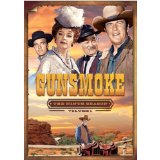 I’ll say this about a program that has remained  consistent in quality for twenty seasons…it makes for challenging reviews. Talking about each season of Gunsmoke is difficult in that you either write briefly to try to avoid redundancies, but might seem too hasty, or you have to labour over each episode, in which case, you’re only going to have hardcore fans paying attention. Since this website has touched on previous seasons: ( http://upcomingdiscs.com/?s=gunsmoke ) I shall opt for the former option, and hope y’all out there catch that I’m not being hasty…but respect a show that warrants no fresh complaints after 9 years a-runnin’ thus far.

The format has been full hours stories since season 7 and it hasn’t lost any steam in season 9. The cast saw a little shifting as Ken Curtis’ character Festus is introduced just before longtime sidekick Chester (played by Dennis Weaver) departs at the end of this season.

The lion’s share of the exposition travels with people coming through Dodge City instead of coming from Marshall Dillon. If fact, the most gripping episode is the season opener where Dillon has been shot and lies asleep in a bed for most all of the episode. The stories are just as compelling as they have been for all the previous seasons I’ve viewed. This show rides a horse named “consistancy.”

B&W Fullcreen. A pretty nice transfer, although it somewhat seems like not exactly as much care has gone into this one than previous efforts. I may be wrong, but I had admired the previous releases for their crispness while this one is the first to show a bit more of it’s age.

This show is very satisfying as it rounds the ninth season marker. This set is not perfect in it’s presentation, and the lack of special features is a disappointment, but still very much worthwhile for collectors.