Posted in: The Reel World by Jeremy Butler on August 2nd, 2013 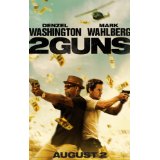 Who said inter-agency cooperation wasn’t possible? Well, maybe cooperation is a bit of stretch for the relationship between Washington and Wahlberg in 2 Guns, the Rated R comedy from director Baltasar Kormakur (Contraband). A buddy-cop film by definition, but a refreshing one that is sure to be a welcomed addition to the subcategory right alongside Lethal Weapon, Bad Boys, and Rush Hour.

Partners in crime Bobby Trench (Denzel Washington) and Marcus Stigman (Mark Wahlberg) have worked together for the last year despite being polar opposites; Bobby is smooth and the consummate professional while Stig (as he likes to be called) is flippant and a bit unhinged. Regardless, the two work well together, the problem is neither is who they pretend to be. They’re both undercover agents; Bobby for the Drug Enforcement Agency (DEA.) and Stig for Naval Intelligence, and here’s the kicker, neither knows about the other’s true identity.

Targeting the same criminal, a drug kingpin by the name of Papa Greco, after a failed attempt the two decide that the only way to get their man is through his money. Conspiring to rob the bank that houses Papa Greco’s money, both also put in motion the plan to bust the other after the heist. The two do the job but come up with a lot more than they expected. Now comes time for the bust and the big reveal. Naturally things do not go as planned, and when trying to report in, the two find themselves hunted by their own people. Oh, but it gets much worse; it turns out that the money they took did not belong to the kingpin as they thought but to someone much more dangerous (Bill Paxton). Now hunted by their agencies as well as several others, Bobby and Stig will have to work together again to dig themselves out of the hole they have dug before that hole becomes their grave.

The importance of good chemistry between leads cannot be stressed enough when it comes to a film such as 2 Guns. It is the truly the deciding factor between commercial hit (case in point: Lethal Weapon) and horrendous flop (case in point: Gigli). Thankfully Washington and Wahlberg deliver; however, I must admit I was skeptical if they could. When you have two A-listers such as these two, sometimes egos get in the way and the film turns into a battle for the spotlight, but that was not the case here. The two easily play off one another and establish a rapport filled with witty banter from the opening credits; the performances make their pairing the best of the year in my opinion.

Just as good were their individual performances; Washington displays the duality of this character masterfully, showing the swagger needed for his cover and  the compartmentalization ability needed for an undercover agent. Wahlberg adds to his comedic chops as the film’s wildcard, with such antics as ramming a heavily guarded gate and blowing away farm life. Paula Patton was another cast member who added mystique to the film and had chemistry with Denzel that could possibly be attributed to the two’s previous work on Déjà vu. Ms. Patton makes the film more than a boy’s club and proves to be more than Washington’s love interest.

A comedy armed (pun intended) with one-liners, quick-witted jokes, and easy banter, 2 Guns unfolds in a unique way and manages to steer clear of few clichés normally found in this type of film. The best part is definitely the final showdown where the film truly lives up to its title.

Jeremy Butler is a film school graduate of the International Academy of Design and Technology. He is been writing for Upcomingdiscs since 2012; however, movies have played a big part of his life for much longer. Favorite genres include horror, science fiction/fantasy, and comedy. Favorite movies are V for Vendetta, Boondocks Saints, Kiss Kiss Bang Bang, and The Godfather.
Under the Bed Kumail Nanjiani: Beta Male