Posted in: No Huddle by Brent Lorentson on August 2nd, 2013 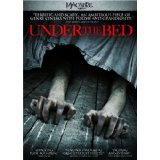 At some point or another as kids we’ve experienced either the fear of the dark, what lurks in the closet, or perhaps the dread of what awaits under the bed.  As adults most view these fears we had as children as impractical, but for those of us who remember these fears, the possibility of what terrors awaited us come nightfall was something very real.  Sure, mom or dad would check the room to assure us there was nothing there, but we knew better.  We knew the moment the parents left the room the dreaded terrors would crawl out from there dark hideouts and come for us in our sleep.  It’s this childhood terror that director Steven C. Miller (director of the Silent Night remake) attempts to bring to the screen.

Neal (Jonny Weston) has just moved back home after living across country for several years with his aunt.  It takes some time before we fully understand the tragedy that caused this move, but we know from the get-go many believe Neal was somehow responsible.  His return home is met with many changes; most painful for him is his father falling in love and wanting to remarry.  Thankfully for Neal he at least still has his younger brother, Paulie (Gattlin Griffith) who has eagerly awaited his return.

Here’s the thing I have an issue with.  It takes a while for this movie to get rolling.  There is a lot of setup and dragging out scenes that are supposed to build suspense, but really it just left me impatient and wanting the story to pick up the pace.  The most obvious incident is at Neal’s “welcome home” party.  All he wants to do is get inside and see his brother, but instead he has to go through numerous human obstacles to even set foot in the house.  Even when he reaches the threshold of the home, it still seems to take forever till he musters up the balls to go upstairs.

With Neal’s return creepy incidents in the house seem to be on the rise.  The brothers decide to share the same room, afraid whatever seems to live under Paulie’s bed will come after them now that it knows Neal is back.  Is it a shared nightmare or reality?  It’s hard to say at first considering any time the two doze off the creature manages to haunt their dreams, (I simply couldn’t help but think about the Nightmare on Elm Street series).

What works, though, is that we get practical effects, and the creature is pretty cool looking.  It may take 2/3 to get to the gore, but when it comes it is a nice payoff.  For those that hang in there the final 1/3 of the film is loads of fun that I wish the rest of the film could have been.

As I’m writing this I’m still trying to figure out why the monster chose to pursue the brothers in the first place. Perhaps it was something I missed, but I don’t understand why I creature from another world who wants to devour children, instead of focusing on other kids throughout the town it remains content to wait for its chance to attack the brothers after years of waiting.  But then again, once you start asking “why”, the fun of any horror movie does begin to fade away.  For a late night Redbox visit it’s worth a look, but don’t blame me when you wake up in the middle of the night and you’re afraid to get out of bed because you’re still worried about what may be lurking for you beneath the bed.

Brent Lorentson is a horror writer and film critic based out of Tampa, Florida. With a BA in Digital Film, he co-wrote and co-directed Scavenger Hunt. His short stories have appeared in various horror anthologies. In 2019 his short script Fertile Blood will be a part of the anthology horror film Slumber Party. He is currently working on his first novel A Dark and Secret Place set to be released in late 2019. Favorite Films: Taxi Driver, Fight Club, I Saw the Devil, The Wild Bunch, Dawn of the Dead, A Clockwork Orange, Pulp Fiction, Heathers, The Monster Squad, and High Fidelity.
Gunsmoke – The Ninth Season Volumes 1 & 2 2 Guns