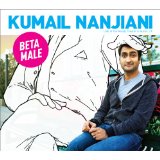 The fact that Kumail Nanjiani decided to call his first Comedy Central special Beta Male immediately gives you a sense of his self-deprecating style. Fortunately, the ability to laugh at himself is merely one of many comedic gifts this on-the-rise comic possesses. This consistently funny, frequently hilarious hour-long set — filmed in Austin’s Moody Theater — touches on a wide range of topics, including his Muslim upbringing, cats disguised as pizza delivery men, and outdated rollercoasters.

Nanjiani has made his way into numerous “Comics to Watch” lists, but most audiences probably know him from scene-stealing turns in Franklin & Bash and Portlandia. He’s also got plenty of comedy geek cred, lending his voice to Adventure Time and collaborating with Michael Showalter and Michael Ian Black for the short-lived Michael and Michael Have Issues. This is my drawn-out way of telling you Nanjiani’s humor ticks a lot of boxes with audiences.

The Pakistani comic gets a good amount of mileage out of growing up in Karachi, which was once dubbed the “City of Nightmares” by the BBC. (“Which, at least, implies that we have dreams,” Nanjiani quips.) Naturally, some of the humor comes specifically from growing up in that part of the world, including a recurring bit about Pakistan’s take on the “Happy Birthday” song. But most of his material is relatable to any person — ok, any young boy — in any part of the world, like the horror of getting a porn tape stuck in the family VCR. Then again, Nanjiani tells us he grew up in a culture where casting a lustful gaze was the equivalent of stabbing the Prophet’s nephew…in the back.

It’s this mix of universal and ultra-specific comedy that makes Beta Male a hit. Nanjiani talks about his love for movies — and about seeing The Elephant Man at age 8, because he assumed it was a superhero movie like Superman or Iron Man — but he also goes on an extended riff about the gloomy sophistication of Playstation 3’s “Heavy Rain”, which hit my videogame-loving sweet spot.

Nanjiani also has an affable delivery that really makes it seem as if his material is simply a collection of stories he’s telling his group of buddies. (This is especially true of his show-closing “Haunted House” anecdote.) Even his jabs at racism — calling the audience “accurate racists” for blindly accepting his mention of a monkey at a Pakistani birthday party — are good-natured. Nanjiani doesn’t rely on profanity, but he doesn’t totally shy away from it either; so an F-bomb feels more like a natural part of the insane story he’s relating, rather than the punchline.

He bounces easily from one topic to another and isn’t afraid to explore a tangent, like the one that leads to the creation of a kitty pizza chain called “Meowminos.” I’m sure these riffs are mostly scripted, but Nanjiani’s casual delivery makes them seem totally tossed-off. He also appears eager to interact with his audience, even if it’s to make fun of somebody’s pretentious gamer handle being a reference to “The Brothers Karamazov.” On the other hand, I thought he relied a bit too much on making fun of the audience’s occasionally random cheers for, among other topics, Brooklyn and a sex act I don’t feel comfortable repeating in this space.

Beta Male — which premiered July 20 on Comedy Central — comes in a CD/DVD combo pack. The CD presents his act in 15 tracks, while the DVD includes a funny post-show Q&A that clocks in at just under six minutes. If you haven’t seen Nanjiani’s work — and you don’t mind a bit of nerdy humor — I highly recommend you give this set a look/listen.