Rock For The Rising Sun (Blu-ray)

Posted in: No Huddle by Brent Lorentson on August 7th, 2013 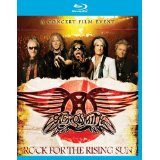 For over 40 years Aerosmith has been rocking the airwaves, and with over a 100 million albums sold, it is safe to say they are one of America’s greatest rock bands.  It had been seven years before that the band previously performed in Japan, and after the devastation the country endured during the earthquake and tsunami in early 2011, the band was inspired to return to Japan and perform.  Rock For The Rising Sun is more than simply a documentary of a concert in Japan; instead it is the documentation of the band’s journey that follows them along their stops throughout their tour and their interaction with the fans.  For fans looking to get the full concert experience from their living room, this should help satisfy your needs, but this experience does offer more.  With footage cut in between songs we get to spend time with the band, though arguably this could have been better suited as footage cut together as a bonus feature instead of getting in the way of the concert footage.

I can appreciate what was attempted here, but I feel it should have been so much more.  This was a missed opportunity to see these pop culture icons truly making a difference and helping the country, or at least a few select individuals, but instead we get to see them at Disneyland.  Had there been no mention of the devastation the country suffered and the band claiming to go there in support of those affected, then perhaps I would view this a little differently.  But to use the tragedy and show nothing of its effects or the band confronting any of the survivors with aid I feel makes this all seems a bit disingenuous.

Looking beyond the motivations of the film, the performances are what you would come to expect from these rock legends.  The energy the band brings to their performance is something that leaves me a bit awestruck.  It’s not just the amazing guitar solos Joe Perry wows the crowd with, nor is it only the performance Steven Tyler delivers with every song, but it is how this band has come together to perform at such a level and have it look so effortless that only a few have attained this level of artistry.

Walk This Way…Livin’ On The Edge…Love In An Elevator are only a sample of some of the hits we are given throughout the film.  Even some of the staple radio play hits are here, but there are a handful that are noticeably missing.  For me Dream On isn’t just my favorite Aerosmith song but easily one of my all time favorite songs, and I can’t help but feel a little let down it didn’t make the playlist.

As for the footage of the band that follows them between shows and on the road, I could watch an entire feature on just this.  These guys are rock stars, and they play the part so well.  When they make a stop at Hiroshima and they are taking in the bombing sites, they look as though they’re ready to walk on stage.  During their stop in Tokyo we tag along for a bit as Steven Tyler gets in touch with his inner child as he takes a ride on the “It’s a Small World” attraction.  But the footage that was fun were the little things, snippets of seeing the band rehearsing backstage, or when the director asks about just how the track Boogie Man came to be.  It’s these little moments the fans don’t get to see that allow this release to shine and stand out from the typical concert release video.

In the end, for the fans of the band I’m sure they’ll scoop this up and have some fun with it.  Is this as informative as I would have hoped? No, but it’s a release that reminds me how powerful music really can be.  Do the thousands of fans who fill the arenas understand all the lyrics? That I couldn’t answer, but what is clear is that music makes a connection despite having the language and cultural barrier.  For forty years Aerosmith has entertained and become a cultural icon that will be hard to equal and doubtful to be surpassed.  They have survived the transition from vinyl, to cassette, to CD, to now being bits of data floating in the internet and into the iPods of many.  For those who have never had the chance to experience the band live, here is your chance, and you don’t even have to worry about having beer spilled on you.  Just please, for your sake, don’t wave your Smartphone at the TV in hopes of an encore.

Love In An Elevator

Livin’ On The Edge

No More, No More

Monkey On My Back

Toys In The Attic

Listen To The Thunder

Rats In The Cellar

Brent Lorentson is a horror writer and film critic based out of Tampa, Florida. With a BA in Digital Film, he co-wrote and co-directed Scavenger Hunt. His short stories have appeared in various horror anthologies. In 2019 his short script Fertile Blood will be a part of the anthology horror film Slumber Party. He is currently working on his first novel A Dark and Secret Place set to be released in late 2019. Favorite Films: Taxi Driver, Fight Club, I Saw the Devil, The Wild Bunch, Dawn of the Dead, A Clockwork Orange, Pulp Fiction, Heathers, The Monster Squad, and High Fidelity.
Kumail Nanjiani: Beta Male Star Trek: The Next Generation – Redemption (Blu-ray)