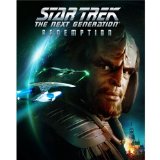 With the success of Best Of Both Worlds, Star Trek: The Next Generation would make frequent use of the season-ending cliffhanger. Believe it or not, that wasn’t so common in those days. The fourth season ended with part one of Redemption.

The first part finds Picard has returning to the Klingon home world to install Gowron as the leader of the Klingon Council, a duty left over from Reunion. He soon discovers that the family of Duras has mounted a rebellion against Gowron, and the empire stands at the brink of civil war. Picard finishes his duty but refuses to interfere in the pending hostilities. The cliffhanger ends with Worf resigning his commission to fight with his brother for Gowron’s side. Back in 1991 we had to wait several months for the outcome. If you buy the season set, you will also have to wait for the conclusion.

However, Paramount has started something with Best Of Both Worlds. They have accompanied the season sets with a standalone release with the complete two-parter cut together as a single episode. Now you won’t have to wait for that conclusion after all.

The episode would continue Ron Moore’s wonderful exploration of Klingon culture. It would also introduce us to the infamous Duras sisters who would remain a threat into the Next Generation feature films. Denise Crosby returns as her half-Romulan daughter and the main villain of the piece.

The episode is presented in its original full-frame aspect ratio. The 1080p image is arrived at with an AVC MPEG-4 codec at an average 25 mbps. The image is sharper than it has ever looked for this series. Colors have a rich texture that I found quite impressive, particularly the deep red of the new uniforms. This episode takes advantage of the image’s texture. The Klingon culture has a texture of its own, and it shines here. Because the episode stands alone the bit rate is high and quality is superb.

Survive And Succeed – An Empire At War: (30:06) Cast and crew focus on the Klingon culture aspects of the cliffhanger and how it all came together, or almost didn’t.

I love the idea of putting these cliffhanger episodes together. I do wish it would also be included on the season sets, but I am sensitive to the idea of a “complete” season and that inclusion on one season would demand it’s inclusion on the next, as well. Perhaps I should learn a little more patience. “Patience is a human virtue.”

Gino Sassani is a member of the Southeastern Film Critic's Association (SEFCA). He is a film and television critic based in Tampa, Florida. He's also the Senior Editor here at Upcomingdiscs. Gino started reviewing films in the early 1990's as a segment of his local television show Focus. He's an award-winning recording artist for Omega Records. Gino is currently working on his 8th album Merchants & Mercenaries. Gino took over Upcomingdiscs Dec 1, 2008. He works out of a home theater he calls The Reel World. Favorite films: The Godfather, The Godfather Part II, The Body Snatcher (Val Lewton film with Karloff and Lugosi, not the pod people film), Unforgiven, Gladiator, The Lion King, Jaws, Son Of Frankenstein, The Good, The Bad And The Ugly, and Monsters, Inc.
Rock For The Rising Sun (Blu-ray) Oliver & Company: 25th Anniversary Edition (Blu-ray)