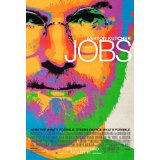 In Jobs, the iconic entrepreneur/inventor says these words during one of his many — and I mean MANY — inspirational speeches. It’s meant to be a “capture the imagination” moment for both his assembled techie troops and for those of us in the audience. Unfortunately, these sorts of platitudes come early and way too often in this biopic. More importantly, the film never really bothers to back them up.

Jobs, in case you were wondering, is not based on the Steve Jobs authorized biography by acclaimed author Walter Isacson. Instead, director Joshua Michael Stern (Swing Vote) and first-time screenwriter Matt Whiteley chronicle Jobs’ life from his time as a restless Reed College dropout with questionable hygiene in 1974 to his triumphant introduction of the iPod in 2001 as Apple Computer’s CEO, which opens the film. Stern wisely keeps the camera at a distance for most of that first scene, which prevents the audience from scrutinizing star Ashton Kutcher’s old-age makeup.

I suppose I sort of buried the lead by waiting until now to mention that Ashton Kutcher(!) stars as Steve Jobs. Kutcher plays Jobs as more of a ballsy hustler than a once-in-a-generation technical wizard, which actually plays to Kutcher’s strengths as an actor. (Insert joke about Kutcher not having any strengths as an actor.) In fact, the film mostly portrays Jobs as an intense and demanding perfectionist who stood on the shoulders of other people’s superior technical prowess.

Enter the affable Josh Gad as Apple co-founder Steve Wozniak, who immediately earns chuckles and our sympathy every time he pops up with a new, unfortunate hairstyle. I was actually surprised — and a little impressed — by how unsympathetic the filmmakers made Jobs in this film. (You can tell Jobs was a jerk because he insisted on parking in a handicap spot.) The universal groundswell of goodwill following his 2011 death can still be felt, so Stern and Whiteley deserve credit for not merely making a puff piece.

The problem is they also seem to have overestimated how much the general public knows about Jobs. The movie clocks in at 122 minutes, but too much of it feels rushed and under-explored. Jobs’ college days, for example, go by in a flash. James Woods pops up in a blink-and-you’ll-miss-him cameo as the professor who encourages Jobs to audit classes even after he’s dropped out of school. (So his eventual meltdown over Macintosh fonts can be attributed to his time spent in calligraphy class.) There’s also a sojourn to India that we’ll probably see more of in the Blu-ray’s deleted scenes, and a cruel scene involving the girlfriend most of the audience has forgotten about until she appears with unexpected news.

Even worse, the movie doesn’t really bother exploring why Jobs’ behavior was so consistently monstrous. His parents (played by John Getz and Lesley Ann Warrren) seem pleasant and supportive enough, letting Steve and his friends use the legendary garage that served as the beginnings of Apple. (There’s nary a mention of the fact that Paul and Clara Jobs were actually his adopted parents.) Those scrappy early scenes were some of the film’s best. Too bad a giant chunk of the movie’s second half consists of dull, sub-Social Network power plays and backstabbing. Some of that time could’ve been used to develop Jobs as a character in the film’s first half because, for the most part, people aren’t intimately familiar with the details of his personal life.

If we’re being honest, Kutcher was cast in the lead role because of his strong physical resemblance to ‘70s-era Jobs rather than his thespian abilities. That being said, he acquits himself decently here, successfully altering his posture, mannerisms and speech patterns to mirror Jobs. I do wish it wasn’t so apparent that Kutcher is “acting”; this isn’t a case where the performer disappears into the real-life role, ala Daniel Day-Lewis in Lincoln. (I believe that’s the first and last time you’ll see “Kutcher” and “Daniel Day-Lewis” in the same sentence.) Jobs struggles to make the people around him understand concepts that haven’t even been conceived yet; unfortunately, the movie has similar trouble showing the audience how Jobs achieved them.

As he did with Swing Vote, Stern populates the cast with a slew of familiar faces. For the most part, these performers help keep things interesting, even when there’s not that much going on. Dermot Mulroney is a welcome presence as Mike Markkula, the semi-retired marketing man who takes a chance on Jobs and Apple Computer when they were still based out of a garage. There’s also Lukas Haas as an un-ambitious friend of Steve’s, scene-stealer Ron Eldard (still rocking his biker look from season 4 of Justified) as Apple designer Rod Holt, and the great J.K. Simmons (sporting a spectacularly bad toupee) as Apple investor Arthur Rock, the personification of a wet blanket.

The film follows Jobs on his journey from Atari to his parents’ garage. We also see his meteoric rise with Apple, along with the inevitable clash and eventual comeback. In real life, the fanatical drive to improve the world burned within Jobs right up to his death; he was reportedly working on new devices to hold the iPad while terminally ill in the hospital. In other words, the real Steve Jobs never stopped innovating. The problem with Jobs is that it never really started.