Posted in: Disc Reviews by Gino Sassani on August 16th, 2013 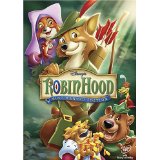 “You know, there’s been a heap of legends and tall tales about Robin Hood. All different, too. Well, we folks of the animal kingdom have our own version. It’s the story of what really happened in Sherwood Forest.”

It didn’t even start as a Robin Hood story at all. Walt Disney had many ideas and plans for fables and fairy tales that he hoped to bring to life with a feature animation film. It’s no surprise that most of these ideas and plans simply never went beyond the dreaming stage. A few were caught up in production struggles, and remnants of those efforts can still be found in the treasure trove that is the Disney Archives. Some of these projects, however, were reinvented and became something very different from what was originally planned.

In the late 60’s Disney had begun planning a film based on the popular German fairy tales of Reynard. Reynard was a fox and somewhat of a trickster in German and Dutch lore. No one really knows where the original material came from. Many believe French, while others German. It had been a popular tale for centuries told in many different forms with various moral lessons attached, much like the English tales of Robin Hood and his band of Merry Men. At some point in the imagining stage concerns began to emerge that the character might not be the kind of image and character that the studio was known for. Many of the Reynard tales have serious adult themes, and it just wasn’t clicking.

Instead of scrapping the project completely, the story became that of Robin Hood. The main character remained a fox and rather faithful to the early designs of Reynard himself. Now the team could have a bit more fun, and the usual Disney trappings were soon added. A story was written by Ken Anderson, who incorporated many of the ideas from the Reynard project. The script was actually quite clever and original, but alas this smaller-budget film would fall to the bean-counter’s axe, and Anderson’s original tale was somewhat mangled to the writer’s public dismay.

Robin Hood (Bedford) and Little John (Harris) have had the unfortunate idea to rob the carriage of Prince John (Ustinov). King Richard is off fighting the crusades, and John is left to care for the kingdom. He has his eyes, not to mention his head, on the crown in a more permanent fashion. He rules as a tyrant who increased taxes to the point of forcing the peasants into starvation. Now Robin is about to steal it back and return it to the people. Of course, that doesn’t sit well with Prince John, and he sets a series of traps to capture Robin Hood.

Using Maid Marian (Evans) as bait and the allure of an archery tournament, Prince John attempts to ensnare Robin, but each attempt fails. Along the way Robin is helped by Friar Tuck (Devine), a badger. Prince John has Sir Hiss (Terry-Thomas), a hypnotic snake, as his right-hand reptile. The story is told by Alan-a-Dale (Miller) a barnyard, guitar-strummin’ rooster.

The film suffers from its similarity to other recent Disney productions. To save cash many background animation cells were “borrowed” from the likes of Winnie-The-Pooh and Jungle Book. In fact the character of Little John, a bear bares more than a passing resemblance to Jungle Book’s Baloo. To add insult to injury, he is even voiced by the same actor Phil Harris. Both characters also share a carefree attitude. Combined these elements make the characters near identical.

There are quite a few songs, but none were provided by the Sherman Brothers. This was a budget film all the way around. Music was provided by many writers and singers, and the tunes are quite forgettable. You will likely not find any of them familiar.

Still, for the little bit of money that Disney put into the film, it holds its own 40 years later, to be sure. You won’t confuse it for any of the Disney classics that are as much a part of American mythology as anything else. The characters are still dynamic and entertaining enough to hold the interests of children of all ages, this reviewer included.

Robin Hood is presented in an aspect ratio of 1.67:1. The 1080p image is arrived at with an AVC MPEG-4 codec at an average 30 mbps. This is not really the original aspect ratio but is an improvement over the butchered 1.78 DVD version that has been the definitive copy for so many years. Purists won’t be happy, but the cropping isn’t really very noticeable and won’t even be noticed by viewers new to the film. Like Winnie-The-Pooh there is a decidedly watercolor look to the film’s style. That also means that colors are a little washed out. This isn’t one of those incredibly bright animation efforts. It’s all part of the style and does not reflect a defect in the high-definition image presentation. The print does have some artifact issues but is cleaner than you have any right to expect for a 40-year-old movie. The image is sharp and textured enough to fully appreciate the watercolor style. You’ll swear there are brushstrokes at times. Black levels are fair, and this is likely as good as the film could look without much more extensive restoration. That might cost more than the original budget of the film itself.

The DTS-HD Master Audio 5.1 is pretty much all you can expect. The original is mono, so you don’t really want a ton of surround stuff mixed in to the picture. The important stuff is solid. It’s clean, and the songs have a CD quality to them that hasn’t been heard since the film’s original release, perhaps not even then. Dialog is clear. Most of it plays directly in front, and that’s just fine with me.

Deleted Storyline: (7:33) HD Obviously, it’s told through storyboards and narration. The film once contained another trap set for Robin. Prince John faked love letters between the two to set up a romantic rendezvous where John would be waiting.

Alternate Ending: (4:34) HD Again it’s storyboards and narration. Robin is wounded after his jump from the flaming tower, and Prince John is hot on his trail.

In the end Anderson was never really happy with the final product. When you write something for Disney, I guess you come to expect more. The characters became quite stereotyped for their animals. The Sheriff of Nottingham was a typical wily wolf, and Sir Hiss, the snake was, well… a bit of a snake. The studio made those few dollars sing, and audiences largely ignored the cost-saving efforts. “That’s what you call pulling it back and letting it go.”

Gino Sassani is a member of the Southeastern Film Critic's Association (SEFCA). He is a film and television critic based in Tampa, Florida. He's also the Senior Editor here at Upcomingdiscs. Gino started reviewing films in the early 1990's as a segment of his local television show Focus. He's an award-winning recording artist for Omega Records. Gino is currently working on his 8th album Merchants & Mercenaries. Gino took over Upcomingdiscs Dec 1, 2008. He works out of a home theater he calls The Reel World. Favorite films: The Godfather, The Godfather Part II, The Body Snatcher (Val Lewton film with Karloff and Lugosi, not the pod people film), Unforgiven, Gladiator, The Lion King, Jaws, Son Of Frankenstein, The Good, The Bad And The Ugly, and Monsters, Inc.
Jobs Kick-Ass 2