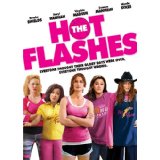 “Men around here’ll write you off after 40, so I know they’ll bet against us. All we have to do is bet on ourselves to win.”

The conventional wisdom in Hollywood is that meaty roles for women quickly dry up when actresses reach a certain age. So director Susan Seidelman (She-Devil, Desperately Seeking Susan) and the stars of The Hot Flashes — a well-meaning, by-the-numbers sports comedy — deserve credit for at least trying to take their cinematic destinies into their own hands.

Brooke Shields stars as Beth, an underachieving Texas housewife who rallies to save her late friend’s mobile breast cancer screening unit. (Beth feels extra motivation because the unit — which the men in town dismissively call “Tessa’s Traveling T-tty Tester” — lost its funding because of her.) To raise the $25,000 needed to keep the unit going, Beth recruits members of the local high school’s Class of 1980 basketball team and challenges the current state champions to a three-game series. Beth’s over-the-hill team is dubbed The Hot Flashes. (Cut to a karaoke sing-along to Donna Summer’s “Hot Stuff” featuring the words “hot flash.”)

Besides Beth, the squad consists of closeted car salesman Ginger (Daryl Hannah), neglected stoner housewife Roxie (Camryn Manheim), town hussy Clementine (Virginia Madsen) and Florine (Wanda Sykes), the mayor who is running for re-election. (For some reason, The Hot Flashes decide to play without a bench.)

The Hot Flashes throws a lot of stuff against the wall, but not all of it sticks. The movie obviously has a worthwhile message about the importance of breast cancer screenings; Good Morning America host and real-life survivor Robin Roberts pops up in a cameo. I also thought it was a shrewd move to dress this message up in sports movie clothing, which potentially makes it more palatable to any guy who would instantly see all the pink on the DVD cover and immediately pass on this film.

However, this is also a story about aging. The film opens with an extreme close-up of Beth experiencing a hot flash in public. And the movie doesn’t make it hard to connect the dots between the marginalization of these characters and the marginalization of actresses in Hollywood. At one point, Beth’s loutish husband (a cartoonish Eric Roberts) literally says, “Well, you aren’t exactly ladies anymore.” As you can see, this movie isn’t exactly subtle. I also wish the script by Brad Hennig hadn’t fallen into the easy trap of making practically every male character — except for the diminutive coach played by Mark Povinelli — a total doofus.

Thankfully, the cast is populated with pros who somewhat elevate the pedestrian material. The Hot Flashes starting five is comprised of two bona fide sex symbols (Shields and Hannah), an Oscar nominee (Madsen) and two Emmy winners (Manheim and Sykes). The DVD case tries to connect this film to Bridesmaids only because any modern film with more than two women in starring roles is automatically compared to Bridesmaids. That sort of stretch isn’t necessary because these performers create a prickly (Roxie and Clementine particularly can’t stand each other) and believable bond of their own, despite each of them only getting one personality trait to play.

Although Shields is listed at 6’0”, Manheim and Hannah at 5’10”, and Sykes actually appears to have a pretty decent handle as the team’s point guard, the basketball scenes are predictably painful. Then again, there’s an inherent limit to how good these scenes can be, because women’s basketball is pretty unwatchable. (I realize some of you may not like that last statement. In my defense…it’s true.)

Despite taking a bunch of unnecessary detours — infidelity; small-town bigotry; Beth’s clash with her daughter, who plays for the opposing team — The Hot Flashes ends exactly the way you expect. When it comes to uplifting/comedic sports movies, that’s not necessarily a bad thing. The film also proves some of these performers have plenty of life left in those legs. If Hollywood still refuses to give them decent roles, I can only hope they invent a better story for themselves next time.