Posted in: The Reel World by Brent Lorentson on August 23rd, 2013 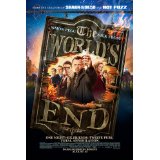 It’s hard to believe it was way back in 2004 when Shaun of the Dead first splashed across the screen.  The film introduced those of us in the US to Edgar Wright, Simon Pegg and Nick Frost, and since then their impact on geek pop culture is well beyond a simple cultish trend.  Shaun of the Dead would be the first film in what the trio would call “The Cornetto Blood and Ice Cream Trilogy”, Hot Fuzz would be the second title, and The World’s End would be the closing chapter.  Upon first glance the films have little to do with each other with the exception of the key actors in all three films, but I feel with a closer look what the three films all have in common is simply the bond of friendship.  Where SOTD would be lifelong friends sticking together, and Hot Fuzz would delve into the start of a new friendship, The World’s End tackles the hardship of being friends and overcoming the hurt friends can inflict upon us.  So for those of you expecting to simply just get a standard alien invasion flick, what we get instead is so much more and is certainly Wright’s most mature work to date.

Things kick off as Gary (Pegg) recounts the epic pub crawl he and four of his closest friends attempted.  The crawl is epic and dubbed The Golden Mile, 12 pubs in one night.  The narration helps introduce us to his former mates and all the near disasters they encountered that night.  Gary seems to be trapped in the events of this night; he wholeheartedly believes that life couldn’t get any better than that night.  We soon discover this was no simple narration but Gary retelling the events at a support group meeting.  It’s 20 years later and the only thing that seems to have changed about Gary is his hairline.  The only regret Gary seems to have about that night is that he and his friends never completed the mile, and now he is suddenly overcome with the urge to complete this wrong from his past.

Unfortunately all his schoolmates have moved on with their lives and have all managed to be successful.  Gary manages to lie and manipulate them to return to their hometown, to reunite and take on The Golden Mile.  It’s Andy (Nick Frost) who has put up the most struggle against Gary; after all the last time the two were together things ended horribly to the point any reconciliation would seem impossible.  But Gary is relentless and eventually gets Andy to come along.  Seeing Pegg and Frost spar with each other I have to admit was a bit jarring at first; we’re all used to seeing these two chummy, but by the power of Greyskull, Gary is such a scumbag even with all of Pegg’s charm it is difficult to like this character.

Filling out the rest of the gang is Peter (Eddie Marsan), Steven (Paddy Considine), and Oliver (Martin Freeman).  Where SOTD and Hot Fuzz were more focused on Pegg and Frost’s characters, The World’s End is an ensemble led by Pegg.  When the gang is all together, the energy they share as they begin their crawl is this wonderful blend of chemistry that results in giggles and bursts of laughter, and they make it all seem so effortless.  Just as much as these scenes with the gang are charming there is just as much hurt, from them confronting Gary about all the lies as well as the drug and alcohol abuse, to Peter confronting a bully that made his childhood miserable and seems to still suffer from the events of his past.  When things come to a head between Gary and Andy this was a moment that hit home for me, having gone through this kind of conversation with a friend who just refuses to get his shit together.  I think many of us have that friend we cared about but just seemed unable to come to grips with life and having to grow up.  Though growing up is a constant theme in Wright’s films, here for the first time I feel we got to see the pain it can actually cause those who surround the person who continues to have the Peter Pan mindset.

It doesn’t take long before the gang notices that something isn’t right about their hometown, and it’s not till a bathroom confrontation that Gary discovers the town has been overrun by robots (though they prefer to not be called robots; after all robot means slave).  The robots, aka Blanks, have a clever design that reminded me of my old toys and Legos that you can pull apart and put body parts on different locations of the body.  This is put to full effect in a fight scene that has a Blank placing another Blank’s legs where her arms used to be so it can continue to fight.  Where this could have been riddled with blood and gore, we get more or less toy parts that bleed blue ink.  And this isn’t a copout; instead this allows for some intense and brutal kills that I’m sure would have pushed censors over the edge no matter how liberal they seem to be lately.

What also works so well are the fight scenes.  All the cool tricks Wright learned while shooting Scott Pilgrim are put to use here in fight scenes that are filled with so much movement at times its hard to keep up with all that is happening.  When Andy goes into this Hulk-like mode, he is an unstoppable beast who rips through the Blanks.  The fight scenes are filled with mad kinetic energy that had me wanting to pick up a barstool and jump into the mêlée.

And though there is so much to take in and enjoy with this film, it is still a bit of a departure from the other two, but only in that it has a slightly more serious tone.  I’d best describe this as a coming of middle-age film.  But the film also respects the notion that some people just can’t change no matter who they hurt (and destroy in the film’s case).  My only gripe with the film falls in the films epilogue.  As a bonus sequence on a Blu-ray I wouldn’t mind this so much, but it kind of sucked the films energy away, and simply put it seemed way out of place.

Though this may be the end of the trilogy, I hope this does not mean an end to Wright, Pegg and Frost working together.  Next up for Edger Wright is the Marvel superhero film Ant-Man, which I have to admit I have my fingers crossed for Simon Pegg stepping into the title role.  But whatever happens, we at least have the Cornetto trilogy that will soon become a routine triple feature fixture in my home.

Brent Lorentson is a horror writer and film critic based out of Tampa, Florida. With a BA in Digital Film, he co-wrote and co-directed Scavenger Hunt. His short stories have appeared in various horror anthologies. In 2019 his short script Fertile Blood will be a part of the anthology horror film Slumber Party. He is currently working on his first novel A Dark and Secret Place set to be released in late 2019. Favorite Films: Taxi Driver, Fight Club, I Saw the Devil, The Wild Bunch, Dawn of the Dead, A Clockwork Orange, Pulp Fiction, Heathers, The Monster Squad, and High Fidelity.
Star Trek: Enterprise – Complete Second Season (Blu-ray) Contest: Win NCIS: Los Angeles – The Fourth Season on DVD From CBS