Posted in: No Huddle by Brent Lorentson on August 27th, 2013 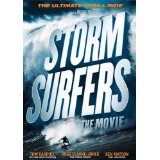 The surf culture and those involved are like a tribe separate from everyone else.  Those who are hardcore into the scene seem to care very little about money or material things, all that seems to matter to this group of outsiders are the onslaught of waves that’ll soon be theirs to ride.  Several movies have been made about the sport/lifestyle, Point Break and Chasing Mavericks are the two that stand out the most for me at this time (not sure if admitting my secret love for Back to the Beach is good idea).  Storm Surfers follows a pair of surf legends, Tom Carroll and Ross Clarke-Jones, who were in their glory days in the 80’s but now in their late 40s and early 50s, they are continuing to take their passion the next level, and it seems that will end up being more than 75 kilometers away from shore.

Big wave surfing is not simply a sport to marvel at, but as the documentary shows, a blend of all the right things happening all at the right time, and even still  there is a large amount of risk.  Storms tend to bring in the big waves, so the surfers follow the weather reports to find where the next big system is going to roll through.  It’s in Australia where we get to see the team first attempt to tackle some waves, where the danger they also have to confront is the sharp rocks that line the shore.

If anyone has ever seen a GoPro commercial, well you somewhat know what to expect when it comes to the surf photography from the surfers and Jet Ski perspective.  Sure, there are some nice shots, but it seems to be the standard footage you would expect in this type of film.  When there are films like Step Into Liquid that are so groundbreaking and phenomenal and they didn’t have all the cool toys to film with as they do now over a decade later, it just comes off as lazy filmmaking.

It’s not till the location Turtle Dove is mentioned that things somewhat become a little more interesting.  A location never before photographed and located approximately 75 kilometers from shore, this may be the one location that Tom and Ross may get to surf that no other man has ever attempted before.  Unfortunately it takes about an hour before this place is even mentioned.

While watching this I wasn’t sure if this was supposed to be about men too involved with their passion to hang up their boards, or was this simply about the idea of needing to be where no one has been before?  Either direction would be a valid and in-depth subject, but the filmmakers don’t seem to want to dwell on the personal lives of these men; we get glimpses, but it’s hardly enough.  The way these men with families go out to risk their lives but seem too obsessed to see how it affects their family is the angle that seems so obvious to explore but instead gets ignored.

For those who love surfing, perhaps this will be of some interest to you, but if this is a topic you could go without then keep on walking.  This is a sport that can easily drive suspense, every wave can be a near-death experience, but none of that was here.  For those who are surfers out there, maybe watching this will inspire you to grab some cameras of your own and film your own thing, and who knows what magic you may be able to capture.  Step Into Liquid was made over a decade ago; it’s about time a new surfing documentary comes along to blow it out of the water.

Brent Lorentson is a horror writer and film critic based out of Tampa, Florida. With a BA in Digital Film, he co-wrote and co-directed Scavenger Hunt. His short stories have appeared in various horror anthologies. In 2019 his short script Fertile Blood will be a part of the anthology horror film Slumber Party. He is currently working on his first novel A Dark and Secret Place set to be released in late 2019. Favorite Films: Taxi Driver, Fight Club, I Saw the Devil, The Wild Bunch, Dawn of the Dead, A Clockwork Orange, Pulp Fiction, Heathers, The Monster Squad, and High Fidelity.
Santana & McLaughlin: Invitation to Illumination (Blu-ray) Super Storm (Blu-ray)